A Court Divided: The Fallout of RBG’s Death 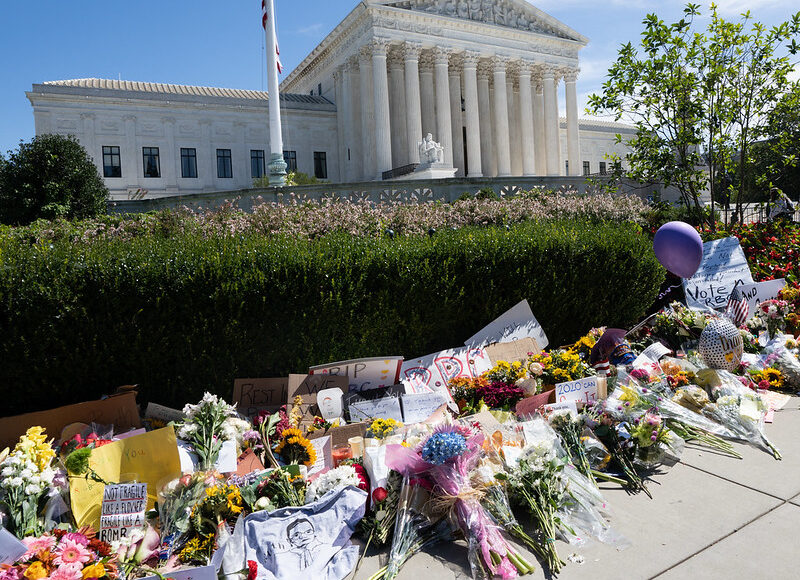 The passing of Justice Ruth Bader Ginsburg has occurred only weeks away from the 2020 presidential election. At a time when civil unrest and political division are skyrocketing in the United States, her death has opened the doors for a highly politicized Supreme Court Justice appointment, to be rushed through in the coming weeks. While the Republican party has made a great show of support for a Trump nomination, the Democratic party has vehemently opposed this, arguing that the appointment best be decided by the winner of this year’s election. This has spotlighted the highly political nature of Supreme Court Justice appointments. There is no better illustration of this issue than Justice Ginsburg’s parting words with her granddaughter. Her wish that she not be replaced until a new president be instated is loaded with meaning. It evokes the very real fear on behalf of American liberals that another appointment under President Trump will tip the ideological scales of the Supreme Court firmly towards staunch conservatism. This begs the question: How and why has the process of Supreme Court appointments evolved since its conception?

How Did We Get Here?

The Supreme Court was originally conceived as a non-partisan institution. Appointments were meant to be apolitical and based solely on the qualifications of the nominee, and their ability to impartially enforce the will of the US Constitution. However, picking justices for their political allegiances was always a possibility. Indeed, while lifetime appointments were intended to shelter justices, to an extent, from the machinations of the Legislative and Executive branches, the nomination and appointment of justices by these branches is inherently an exertion of leverage over the US’s political future, especially since the 1950s. As a President, there are few acts that can ensure one’s political legacy more than Supreme Court Justice appointments. These represent a chance to impact the political landscape years after the conclusion of a presidential term.

The partisan divide within the Court is greater today than at any other point in its history. While politicization was always possible, there is very little evidence of strict partisan division until 1990, when President H. W. Bush successfully appointed Justice David Scouter to the Supreme Court. This was a turning point, marking the last appointment by a President of a Justice on the opposite side of the political spectrum. Since then, all Democratic nominees have been liberal, and all Republican nominees have been decidedly conservative. This has fostered the development of two distinct ideological encampments within the Court, and has locked the Democratic and Republican parties in a contest with one another to establish a liberal/conservative majority.

As concerning is the fact that partisan division has also coincided with asymmetrical polarization. While Democratic nominations have remained relatively ideologically consistent, Republican nominations have only gotten more conservative, such that since 1990 the Supreme Court has shifted substantially to the right. This change can be attributed to the development of Conservative grooming networks like the Federalist Society, which serves to mentor and prepare ideologically faithful Conservative lawyers for federal court positions. These networks were created in reaction to perceived liberal bias in elite law schools and legal institutions like the American Bar Association. The Federalist Society has been extremely successful. The organization’s creation in 1982 coincided with the instatement of President Ronald Reagan in 1981, whose agenda included staffing the Justice Department and federal courts with ideologically committed Conservative lawyers.

This served as a valuable entry point for Federalist Society members into government office, resulting in two of their members being Supreme Court nominees: Judge Robert Bork and Justice Antonin Scalia. The first and second Bush administrations upheld Reagan’s conservative judicial legacy and kept close ties with the organization. Both selected senior Federalist Society members to head up their judicial selection processes, providing staunch conservatives with considerable leeway over federal appointments, and contributing directly to the successful nominations of Justices Thomas, Alito, and Roberts, all of them FS members. The legacy of these grooming networks has been to turn ideological commitment into an asset, producing increasingly Conservative nominees and further polarizing the Supreme Court. There are today five present-and-former Federalist Society members serving as Supreme Court Justices, which will be supplemented by current Trump nominee Judge Amy Coney Barrett.

This intense asymmetric polarization of the Supreme Court means that the passing or resignation of Supreme Court Justices during election years is especially contentious. The last time this occurred was in February 2016 with the passing of conservative Justice Scalia. Following his death, the Democratic and Republican parties disagreed over the propriety of President Obama appointing a new justice so close to a presidential election. Senate Majority Leader Mitch McConnel asserted that the death occurred too close to the election and that they should wait until a new president was sworn in before making an appointment. The Republican Senate majority ultimately refused to give Obama’s nominee, Judge Merrick Garland, an official hearing, successfully stalling the nomination until President Trump took office. This resulted in the subsequent nomination and appointment of conservative Justice Neil Gorsuch, yet another Federalist Society member. Now, with the passing of Justice Ginsburg occurring only weeks away from the 2020 General Election, the Republican Senate majority has changed its tune. Despite strong objections from the Democratic party, it seems that suddenly, nominating and appointing a Supreme Court justice in such close proximity to an election is far less problematic.

However, it would be unfair to assert that this is a purely one-sided issue. Indeed, in his objections to the 2016 Garland nomination, McConnell referred specifically to remarks made by Vice President Biden in 1992, when he was Chair of the Judiciary Committee. In these remarks, Biden is quoted advising President George H.W. Bush to not put forward a Justice nominee until after the upcoming November election, concluding with the assertion that should the President do so, he would urge the Senate to withhold a confirmation hearing. In every recent instance, objectors have insisted that their protests were not ideologically based, but rather a righteous effort to vest nominating power in the hands of the president chosen by the people. In all instances, nominators have decried objections as attacks on judicial independence and reaffirmed the qualifications of their candidate. This back-and-forth hypocrisy foregrounds the profound politicization of Supreme Court appointments, and demonstrates that partisan polemics are now deeply entrenched in the process.

Ultimately, the Supreme Court is not immune to the political machinations of the Executive and Legislative government branches. Perhaps it never was. Nor was the nomination of Supreme Court justices ever a purely non-partisan issue. Gradual partisan polarization, for which elite conservatives deserve most of the blame, has brought us to where we are today. We are now living at a time where the selection of Justices is more politicized and divisive than ever before. In fact, there is an argument to be made that in present times, impartiality and non-partisanship are simply pretenses expounded by the political opposition — on both ends of the political spectrum — whenever it best suits their interests. In particularly contentious times, such as those we are experiencing in advance of the 2020 Presidential Election, Supreme Court appointments can not help but breed intense controversy, and thus, spotlight the fact that justice is inextricable from the political.

Feature Image: Tributes to Ruth Bader Ginsburg in front of the Supreme Court the Morning after her Death. Tributes to RBG by Victoria Pickering is licensed under CC BY-NC-ND 2.0