Beyond Slogans: Why #Oprah2020 Would be a Tragic Mistake 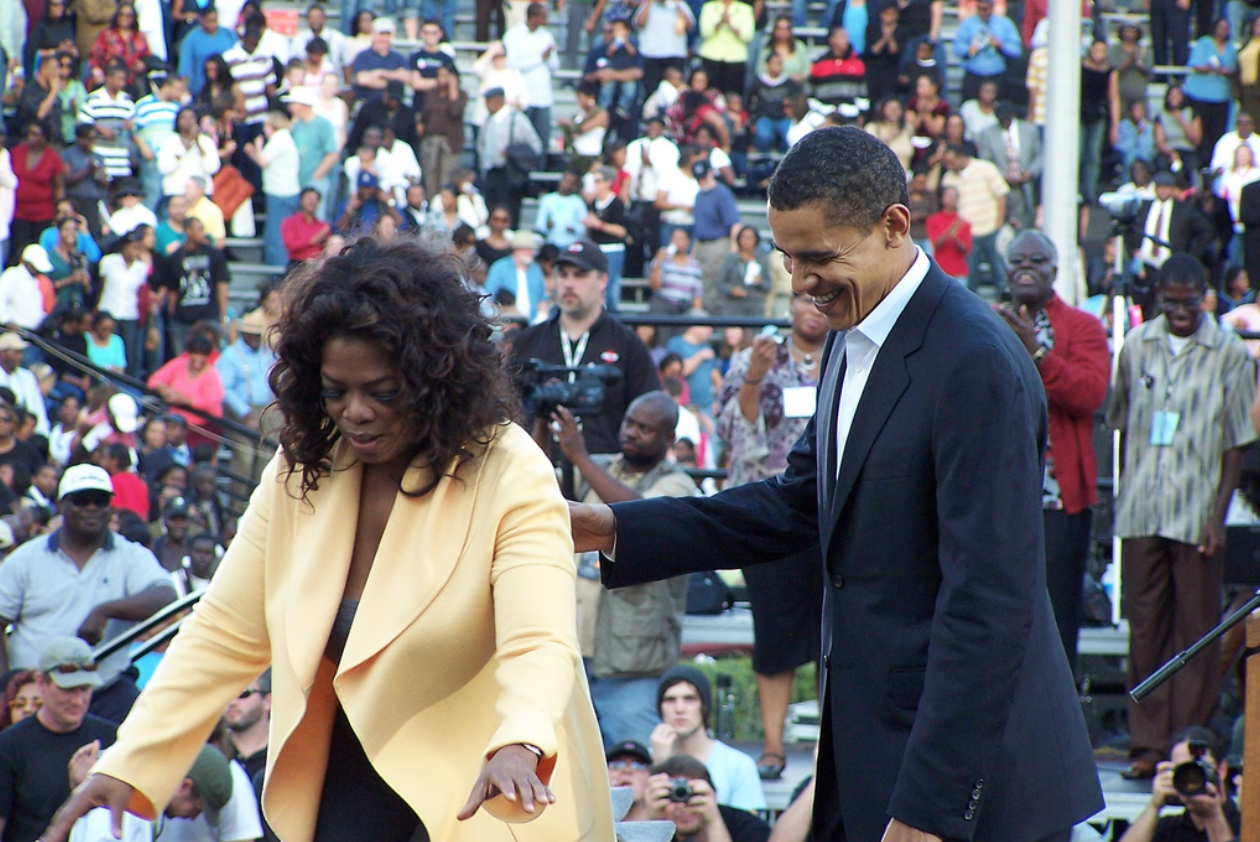 On January 7, 2018, a familiar face in an elegant black gown looked out at a room filled with the most glamorous mourners the world had ever seen. The biggest names of 2017 in film and television were gathered in Beverly Hills for the 75th annual Golden Globe Awards when Oprah Winfrey addressed the crowd. The vast majority of attendees were dressed in black to show solidarity with the millions of women who are sexually assaulted every year. The end of Ms. Winfrey’s speech, which brought the elegantly dressed room to its feet, is worth quoting at length:

“So I want all the girls watching here, now, to know that a new day is on the horizon! And when that new day finally dawns, it will be because of a lot of magnificent women, many of whom are right here in this room tonight, and some pretty phenomenal men, fighting hard to make sure that they become the leaders who take us to the time when nobody ever has to say ‘Me too’ again.”

Oprah Winfrey was the perfect woman to deliver this emotionally moving and timely speech. The first African-American woman self-made billionaire, she has been an inspiration to millions of women (and men) over the years, having risen from extreme poverty to a rank on the Forbes 400, all the while carrying the weight of having been sexually assaulted multiple times as a teenager and being one of the only prominent black women on television. Ms. Winfrey’s speech no doubt filled many young women with hope in the wake of the recent media frenzy that confirmed what they already knew, that the world that awaits them, whether it be in business, entertainment, or any other field, is still filled with predatory men who will never view them as equals. Harvey Weinstein, Louis C.K., Bill O’Reilley, Charlie Rose, and Gilbert Rozon are but a fraction of the list of extremely influential men who have recently been exposed as serial sexual assaulters. Ms. Winfrey’s address was not simply an inspirational speech, but a cathartic moment for the millions of women who have been sexually assaulted or otherwise held back by a world that is still largely dominated by white men. Culturally, socially, psychologically, it was a big moment, not only for Hollywood, nor even for women’s history, but for the history of humanity’s collective consciousness, if such a thing exists.

It is for these reasons that I, for one, am disappointed with the conversation that began in the immediate wake of this ethically and emotionally potent moment in the history of American (and Western) culture. The hashtag #Oprah2020 immediately began spreading like a wildfire in the Twitterverse, spurred on by a statement by Ms. Winfrey’s longtime partner Stedman Graham to the Los Angeles Times that she would “absolutely” run for President, and the report by CNN that two more of the television magnate’s friends (unidentified) had confirmed that Ms. Winfrey was actively mulling a run for the White House.

This conversation is misguided for two reasons that are quite distinct, but equally important. On the one hand, Ms. Winfrey’s speech should be appreciated, talked about, spread and analyzed for its cultural, historical and sociological importance, not for its potential implications, which are currently purely speculative. While much has been made of Ms. Winfrey’s proclamation that “a new day is on the horizon!” which, according to Washington Post columnist Eugene Robinson sounds like “a well-crafted slogan for a presidential campaign”, virtually nothing has been written about the speech’s mention of Recy Taylor who, as Ms. Winfrey eloquently explained, “was a young wife and mother [in 1944] walking home from a church service she’d attended in Abbeville, Alabama, when she was abducted by six armed white men, raped, and left blindfolded by the side of the road coming home from church”. Having never obtained justice for the crime perpetrated against her, despite the best efforts of NAACP investigator Rosa Parks, Recy Taylor nevertheless “lived as we all have lived, too many years in a culture broken by brutally powerful men.” Neither Eugene Robinson, nor anyone else apparently, seems to think that this part of the speech was worth writing op-eds about. It is easy to understand why. The recounting of the story of the rape of Recy Taylor cannot be reconstructed or reinterpreted as a meaningless slogan that can be used to manipulate Americans by an army of public relations specialists. Instead, it is a subtle and pointed commentary on the often ignored interrelation between gendered and racialized violence. This important commentary by one of history’s most influential black women will, unfortunately, forever be lost in the hysteria surrounding the prospect of a Winfrey v. Trump horserace in 2020, an event that would no doubt be extremely lucrative for the very media outlets that cannot stop talking about it.

Apart from the tragic fact that the subtleties of Ms. Winfrey’s speech have largely been ignored in favour of its potential “presidential” flavour, the very suggestion that one can judge the desirability of a potential candidacy for the presidency based on a speech is itself deeply flawed. By way of demonstration, let us briefly review the state of the world at the time of writing this article. In 2017, the Bulletin of Atomic Scientists moved the hand of their infamous doomsday clock to two and a half minutes to midnight (midnight being a large scale catastrophe that would partially or fully eliminate the possibility of organized human life on Earth). The Bulletin explained: “rising temperatures, resulting from the industrial-scale burning of fossil fuels, will change life on Earth as we know it, potentially destroying or displacing it from significant portions of the world, unless action is taken today, and in the immediate future”. Large parts of the Middle East are caught in a whirlwind of violent instability, resulting in unacceptably high levels of loss of life every year. The United Nations called the high risk of famine and rapid spread of cholera in Yemen, a country that is being torn asunder by Saudi-led U.S.-backed bombing, the “worst humanitarian crisis” in the world, and one of the worst humanitarian crises since the end of World War II. According to recent studies, the United States currently has 16.7 million children living in food-insecure households. Medical bankruptcy is the leading cause of bankruptcy in the country. The rust belt is bleeding manufacturing jobs, fuelling anger at Washington elites that was used by the Trump campaign to dupe the public into trusting the President with political power. I could go on like this for some time, going through the list of domestic and foreign policy issues that the next U.S. President will have to face and help resolve, possibly beginning in nuclear North Korea, then perhaps moving to revisionist China, and maybe finishing in the world capital of student debt, the United States of America itself. The point would remain the same: the next president will not only need to understand the legislative and diplomatic processes to be able to deal with these crises but will have to be a proven advocate of the right policies to solve them.

To be clear, I am not arguing that a President Winfrey would be bad for America (and the world). The reality is that I do not know what kind of president Ms. Winfrey would be, and neither does anybody else. What I am arguing is that one speech does not qualify you to hold the world’s most powerful office, especially at a time when the crises mentioned above demand urgent resolution. Fortunately, the American people agree. According to a recent NPR poll, a majority of Americans do not want Ms. Winfrey to run for president in 2020.

What do the American people want? According to recent polls by NBC, CBS, the Wall Street Journal, Harvard, Harris, Bankrate, and the Associated Press, a majority of the American people are in favour of making public colleges and universities tuition-free, replacing the largely private healthcare system with a single-payer system (joining the rest of the developed world), increasing taxes on the wealthy, increasing infrastructure spending, increasing the minimum wage to $15/h, and policies to reduce greenhouse gas emissions. In other words, Americans want real policy solutions to issues of domestic and global importance.

At this moment in time, nobody has any clue where Ms. Winfrey stands on any of these issues. And even if we did, we have no reason to believe that she has even a basic familiarity with the gears and levers of government. In other words, there is no good reason to want Oprah Winfrey to be the next President of the United States.

At a time when global climate change threatens the future of our species, cholera and famine lurk at the doorstep of millions of Yemenis, and poverty devastates neighbourhoods that house millions of American children, we should be demanding more than inspiring words from President Trump’s prospective 2020 opponent. We should take Ms. Winfrey’s speech for what it is: a moment in history that will one day become, and perhaps already is, culturally and historically iconic. Full stop. The next occupant of the Oval Office will need to be a proven legislator and political leader, someone who has proven that they are swayed only by their concern for the present and future state of ordinary Americans, and the health of our planet. If that does not end up being the case, there may be a very limited number of “new days on the horizon.”