Canada’s Hypocrisy: A Conflict of Self-image and Systemic Racism 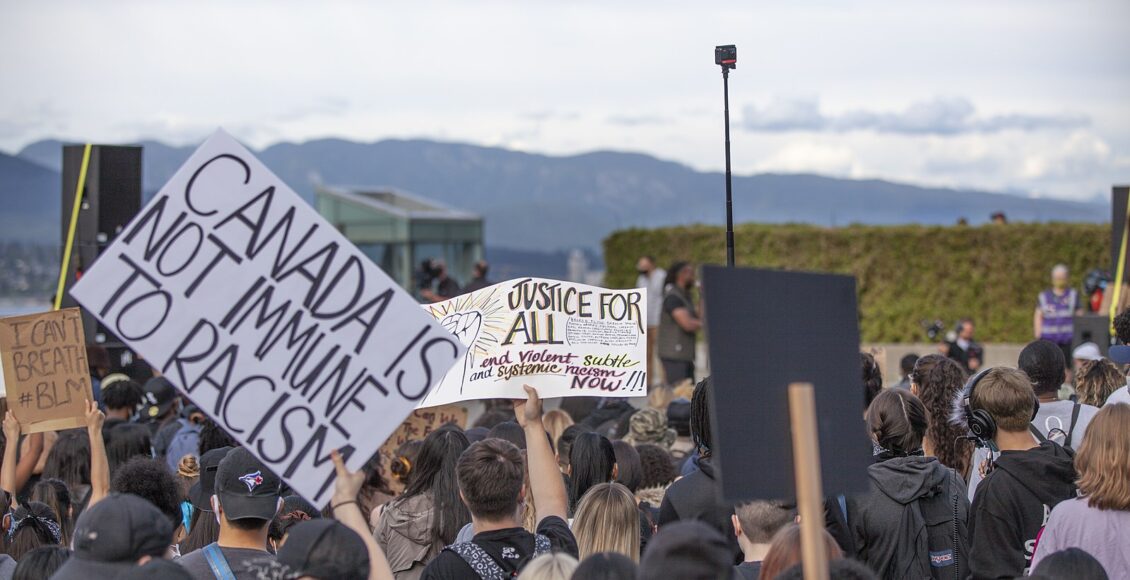 Poster at the June 5th protests in Vancouver. There are growing concerns about the conditions of BIPOC in Canada as the conversation pivots away from American events.
Share

The world is fighting to honor the life of George Floyd, an African-American man who was murdered by Minneapolis police officer Derek Chauvin; all under the passive eyes of officers Alexander Kueng, Thomas Lane, and Tou Thao. Floyd’s murder sparked international protests demanding accountability for a system plagued by racism that facilitates the oppression of minorities.

Floyd’s murder has pushed the problem of American institutionalized racism to the forefront of the country’s public agenda. Yet the issues discussed are neither new, nor solely American. Canada has its own list of names that haunt it, including Ozama Shaw, Raymond Alliman, Illutak Anautak, and Babak Saidi. The latest name to join this list is Regis Korchinski-Paquet, a 29-year-old Afro-Indigenous woman who died in Toronto on May 27, the same week as George Floyd, after a police intervention resulted in a fall from her 24th-floor apartment. Leading to the incident, Korchinski-Paquet’s mother had requested the assistance of the Toronto police to deescalate an argument with the victim who suffered from mental health issues. Many have denounced the outcome of this intervention as a failure on the part of the officers responding to the call in providing Korchinski-Paquet with the support her mother had requested.

Faced with comments highlighting similarities between Canadian and American events, Ontario Premier Doug Ford reiterated that Canada and America are “like night and day”, suggesting “we’re different than the United States and we don’t have the systemic, deep roots that they have had for years.” Unlike the US, both the Canadian government and the public often mistakenly believe in a false narrative of Canadian global leadership, based on progressive politics and liberal values. The government proudly claims “inclusive and accountable governance, peaceful pluralism and respect of diversity.” Yet proof to the contrary is evident when examining the full history of Canadian minorities, stories that are often omitted from the country’s self-image as the antithesis to the United States. Systemic racism is ingrained in the foundations of Canada’s Confederation, as its creation was dependent on the Indian Act of 1876 that gave colonizers the power to claim territories that belonged to Indigenous communities. The legislation put in place sought to “get rid of the Indian problem” through assimilation policies such as federal reserves and residential schools. Today, the abuse and trauma endured by indigenous communities as a consequence of such policies are well-documented.

While Canada celebrates its efforts to provide a safe haven to slaves from the US in the 1800s, it overlooks that Black settlers were segregated into communities marked by inequality. Africville, Nova Scotia, was a Black community whose ancestry goes back to those settlers. As the province developed, areas like Africville were neglected leading to a lack of access to basic services such as clean water and garbage disposal, infrastructure that Canadians in the 1960s considered a human right. In 1964, instead of investing time and money into building up the community, city council chose to raze down the houses, forcing hundreds of Black families to relocate, a decision taken without consulting over 80 per cent of residents. Sunday Miller, former executive director of the Africville heritage and trust, explains that Africville’s community members were bullied out of their homes by officials who “forced them to be a ward of the government, which is what happened for those who went into social housing, you took their dignity from them.”

Exclusion policies targeting minority groups are common throughout Canadian history. In 1885, as the historic Canadian Pacific Railway was completed in no small part due to the exploitation of Chinese immigrants at low labor costs, the Canadian government established a Chinese head tax that required all people of Chinese origin to pay a $50 fee simply for existing. By 1903, the tax had increased tenfold, in an effort to favor white, European immigration in Canada. In 1923, the Chinese Exclusion Act came into effect which banned Chinese immigration up until 1947.

These forgotten pieces of history still affect Black, Indigenous, and other peoples of colour. For example, a 2016 United Nations’ report found that an alarming 47 per cent of children of African descent live below the poverty line compared to 18 per cent of white Canadian children. While the Indian Act may seem like a relic of the past, its policies have contributed to increased rates of mental illness, substance abuse, suicide, unemployment, and poverty in indigenous communities today. Reserves are still severely underfunded and residents lack access to basic public services. A 2020 report by the Quebec Human Rights Commission found that visible minorities represented only 6.3 per cent of all employees working in public institutions, indicating a slow 3.6 per cent increase between 2009 and 2019. For the same period, representation of Indigenous people as public servants remained stagnant at 0.3 per cent. These deep inequalities remain present despite the implementation of the provincial Act respecting access to equal employment in public bodies, now in effect for nearly two decades.

It is clear that the oppression of BIPOC communities has left an everlasting mark on their socioeconomic conditions. Canada has built institutions that rule the nation through a system controlled by a white majority that selects the liberties to which minority communities have access to, and that is the very definition of systemic racism. Evidently, Premier Ford’s statements, echoed by many other politicians, are either a demonstration of ignorance or, worse, a testament of institutionalized denial.

In recent years, the Canadian government has issued a series of apologies recognizing the darker areas of Canadian history. In 2006, Prime Minister Harper’s apology for the Chinese Head Tax recognized that “the Canada we know today would not exist were it not for the efforts of the Chinese labourers.” The statement was praised by the Chinese Canadian National Council for its ability to have a transformative impact on all Canadians in paving the way for “a strong, united and inclusive Canada”. Such public statements bring forward issues that need to be faced head-on by Canadians, instead of erased from history. National identity is a result of both the successes of the country, but also its shortcomings. In an era where minority communities have gained a more powerful voice in part due to social media and increased global awareness of human rights, governments are held accountable for their current actions and the past from which they benefited from.

Canadians enjoy expressing their pride in rising above the nationalism and bigotry of Trump’s United States. However, while multiculturalism is without a doubt an integral part of Canada’s identity, it has been consistently proven that the country’s institutions and policies punish those who contribute to this diverse nation. Similar systems of oppression that led to George Floyd’s murder also target minority communities in Canada. It is thus time for Canadians to reevaluate their privilege and accept their role in supporting the institutions that uphold the nation’s persisting tradition of systemic discrimination.

The featured image,“Black Lives Matter, Anti-racism rally at Canada Place” by GoToVan, is licensed under CC BY 2.0.