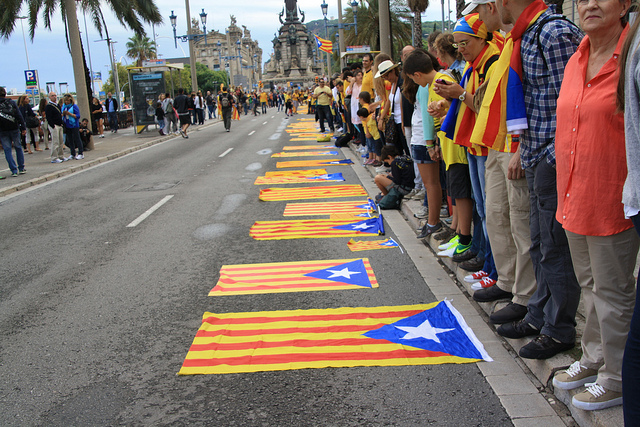 With more than 700 mayors across the Catalonian region of Spain declaring their allegiance towards independence and turning their backs on the 1978 Spanish Constitution, Catalan citizens will cast their votes on October 1st, 2017 to determine whether or not they will secede from a unified Spain. Despite mass opposition from other regions with slogans that brand this referendum as “illegal” and “unconstitutional”, pro-independence and separatist movements refuse to back down and insist that this vote will happen.

According to Section Two of the Spanish Constitution of 1978, the current supreme legal document governing Spain’s citizens “is based on the indissoluble unity of the Spanish Nation, the common and indivisible homeland of all Spaniards”. Prime Minister Mariano Rajoy has solemnly sworn that even if the referendum does pass, an independent Catalan region will not be legally recognised and sanctioned.  In quick succession, prosecutors have also warned of possible charges against the 700 mayors and any other officials for civil disobedience and the misuse of public funds. Spain is officially comprised of 17 “autonomous communities” and 2 “autonomous cities”. This infers that the country itself is not a federation, but rather, a series of unitary states. This political mechanism is utilised to prevent and limit each region’s autonomous power in accordance with the constitution.

The Catalan independence movement was established in 1922 by Francesc Macla, but in retrospect, independence was never the main concern of Catalonian political parties, who instead focused their attention on autonomy within the Spanish Kingdom. Only in 2006 did the concern for independence override demands for autonomy after the Audiencia National (Spanish High Court of Justice) challenged Catalonia’s “Statue of Autonomy” by asserting that certain charters were unconstitutional. This was interpreted as a major threat to autonomy for many Catalan citizens, leading to demands for independence which continue to resonate. From 2006 onwards demonstrations and protests have been met with numerous attempts to launch a referendum for Catalan separation. The continual economic difficulties that have plagued Spain have also been cited as reasons for an independent Catalonia. Spain has been suffering from a severe economic crisis since 2008, the youth unemployment rate was 43.5% with an economic contraction of 3.7% as well in 2009. In 2012 a major breakthrough occurred when former Catalonian President Artur Mas, in response to mass protests, launched a general election, which led to the election of a pro-independence majority to the Catalonian parliament. The regional parliament established the “Catalan Sovereignty Declaration”, a foundation for potential independence; it empowered Catalonia’s citizens to dictate their own political future. Consequently, political barriers were erected by the Constitutional Court of Spain who promulgated that the declaration is unconstitutional and invalid.

As October 1st approaches, tension and threats between pro-independent groups and oppositionists have escalated to unprecedented levels. The Spanish government has announced that they would intervene in Catalonia’s finances and guarantee that “not one euro” shall be invested into the referendum. Prior to the referendum, there was an attempt by Catalan President Carles Puigdemont and other officials to establish a new dialogue to discuss conditions for independence and Catalonia’s future. In response, Inigo Mendez de Vigo, Spain’s current Minister of Education, Culture and Sport has criticised this dialogue as a joke, instead of a formal offer, noting that  “they have only put on the table a referendum yes or yes”. An ultimatum by the Spanish Government was also issued towards the Catalans which threatened to seize their financial budget. In addition, police raids have been organised to hunt down any related materials to the referendum.

The failure to establish any form of negotiations between the two sides only perpetuates the tension and intensifies both sides’ arguments. Responses to the resurgent independence movement from the Spanish Government have been relentless and frightening. Madrid has threatened to arrest the 700 mayors who have agreed to open up spaces for citizens to vote. Efforts to ensure that this referendum will not occur have been intensified and without a doubt the Spanish Government does not want to lose one or any of its territorial jigsaw puzzle pieces. The repercussions would be alarming if Catalonia secedes, not just for Spain but also the European Union (EU) and Catalonia itself.

An independent Catalonia would raise numerous social, political, economic and cultural questions that must be addressed. Would the Spanish Constitution of 1978 remain legally valid? Would the Spanish Constitution fall apart, and if so what does this mean for other laws that govern the regions? Would other regions like the Basque or Galicia follow in the footsteps of Catalonia and could this signify the dissolution of Spain as a nation? Would Catalonia become a recognized member of the EU, and if not, what are the consequences? The repercussions are monumental and only more questions would arise.

As the desire for Catalan independence continues to gain momentum, it appears that questions surrounding what to do if the referendum succeed have yet to be answered. This is extremely problematic because many pro-independent supporters neither recognize nor have begun to discuss the political, social, economic and cultural changes secession would usher in. There appears to be limited desire to think ahead about the prospects of an independent Catalonia. Brexit shows signs of concern for this referendum. Even after Brexit, many people are still uncertain on what fundamental changes and effects it will have on Britain and the EU. Negotiations have been extremely slow, with limited developments and it could take years for any new arrangements to occur. If it’s taking this long to negotiate, then the same would apply with an independence Catalonia. There has to be a lengthy and critical dialogue among that pro-independence Catalonian supporters must engage in.