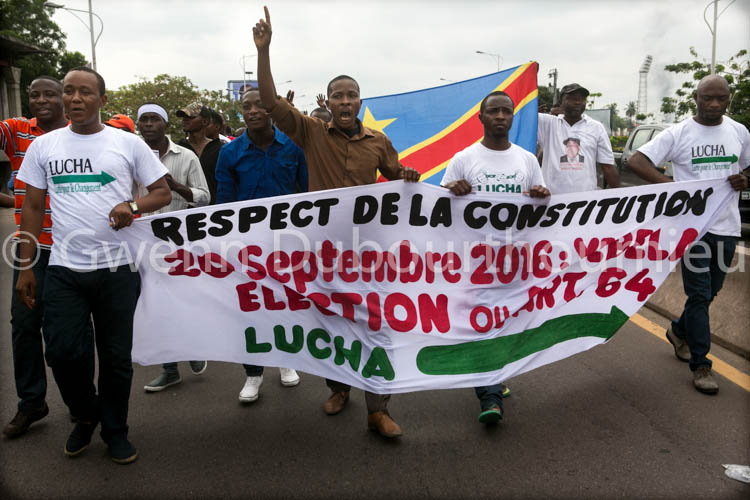 At less than four months from the national election in the Democratic Republic of Congo, the people could not be more enthusiastic at the innumerable possibilities that a peaceful democratic transition would entail for the country. However high the expectations may be, the pressing concerns – the legitimacy of the elections’ procedures – remain  vague and poorly addressed.

After many years of uncertainties regarding whether or not Joseph Kabila would breach the constitution and remain in office for a third term, the pressure to hold the elections resounds from various national groups, like the Catholic Church, and international organizations (the United-States and the EU). A few hours before the deadline of the electoral candidate’s inscription, the president announced that he will after all not present his candidature. His political party, the People’s Party of Reconstruction and Democracy (PPRD), has presented the alternative candidacy of Emmanuel Ramazani Shadary, the former interior and security minister and the permanent secretary of the PPRD. Shadary, a die-hard loyalist to and protégé of Kabila, represents a controversial figure. While he promises social-democracy for the country, he is equally a man accused by the international community of violating human rights.

Whereas Shadary’s campaign gives rise to mixed opinions, other candidates  have attracted popular support, much to the current government’s disdain. The two strongest opponents of Shadary were Jean-Paul Bemba and Moïse Katumbi, but unfortunately for the country’s chances at political competition, they were both disqualified from the race. The alleged reasons for their rejections were based on legal grounds. Bemba, a former vice president in the transitional government of DRC, was incarcerated for crimes against humanity and corruption; although he was later acquitted by the International Criminal Court (ICC), the Supreme Court of Congo disqualified him based on retained charges for corruption. As for Katumbi, a former governor of the Katanga’s province, he was issued with an international mandate of arrest for mercenary recruitment as he is believed to be orchestrating  a Coup d’état according to the Kabila’s administration. Although Katumbi was forced into exile, he attempted to return to Congo in order to register on the electoral list. Meanwhile, the minister of Communication accuses him of refusing to end his exile. He claims that Mr. Katumbi is evading the allegations, but in fact the borders remain blocked and  Katumbi, now in Zambia, is prevented from entering the country. These so-called legal grounds for disqualifications are perhaps masquerading strategies to forcefully remove potential opponents. One thing for sure:  Shadary has much greater chances at winning the race.

Other strong candidates who remain in the race include Vital Kamerhe and Félix Tshisekedi.  Kamerhe, the president of the Union for the Congolese Nation (UNC), seems to be the most popular contestant. Well-spoken and politically experienced, he attracts supporters from various backgrounds. Félix Tshisekedi, a political figure advocating for social liberalism, is the leader of the Union for Democracy and Social Progress (UDPS).  Along with Adolphe Muzito and Antipas Mbusa, two less popular opposition candidates, Bemba, Katumbi, Kamerhe and Tshisekedi have met in early september 2018 to discuss possible loopholes in the election. The combined work of these leaders produced a document addressed to the government and to the Commission Électorale Nationale Indépendante(CÉNI) in which nine prerequisites to avoiding a chaotic post-elections period were elaborated. Inter alia, they  demand the assistance of  international organizations to finance and observe the elections  and they include measures to redress political tensions such as the return of exiled political figures and the liberation of political prisoners. The declaration highlights that if these measures are not respected, the government and the CÉNI will be held accountable for the ensuing chaos and consequences of an unfair election.

Several Congolese political activists are also pointing out their concern regarding the likelihood of electoral fraud and questioning the reliability and neutrality of the CÉNI. They argue that the commission lacks organization and neutrality because it has allowed President Kabila to rule for over two years past the end of his mandate on the grounds that it was not prepared to hold elections.  As a result, the population does not trust that the CÉNI can effectively monitor all electoral actors and processes on its own. Just like the leaders of oppositions, other national groups formalized their demands and enumerated their concerns, addressing them instead to the international community.

Kisangani Archbishop Marcel Utembi, leader of the National Episcopal Conference of the Congo (CENCO), warned the Security Council that without external validations, the government will maintain Congo in crisis. To ensure a fair election, Utembi highlights the need to facilitate the permission for national and international bodies to take part as observers, to prevent application of arbitrary rule and lastly, the need to reach consensus on electronic machines votes. This latter concern is one of many external bodies. The United-States denounces the use of electronic machines because the tool facilitates falsification of results. The Congolese government, however, maintains that it will finance their election and will not require the help of the United-Nation for funds; clearly, they  would benefit from greater discretionary decision-making power. Additionally, the involvement of external scrutiny has not been determined and it is likely that the government is implying a  rejection of international bodies’ participation.

Without external validation, there is undoubtedly  greater opportunity for instances of fraud. As political competition risks being further undermined, the PPRD could rejoice over an early victory. If Kabila’s preferred candidate becomes his successor, there are  considerable benefits  for himself.  Because  the international and domestic pressure to hold the elections this year are extremely high and widespread, it would be far too treacherous for President Kabila to postpone them once again or even to breach the constitution. But the flip side of the coin is that Kabila’s reign might just not be over yet. If Shadary prevails, President Kabila maintains indirect power in the government as his political decisions and policies would be carried out by his chosen successor. Even if Kabila’s departure from power would constitute a significant step towards democracy, Shadary’s election would not be entirely democratic since Kabila would continue to run through his preferred candidate. Further, Emmanuel Ramazani Shadary’s victory could serve as a potential gateway for Kabila to regain power. Another window of opportunity for Kabila’s reign to live on would thus be for him to present himself to the 2023 elections, which is not unlikely to happen.

Altogether, the direction of the election remains uncertain and confusing for Congolese. Despite doubts about the level of freedom and fairness, the population can rest assured that with the preparation slowly unfolding and materializing, the country is making long-awaited steps towards consolidating democracy.