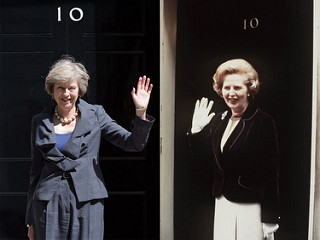 As of late, there has been immense, yet not undeserving, focus on the upcoming American election, one that is seen to be a choice between right-wing populism and a renewal of a more progressive left-wing leadership. While support for and fear of what very well could be the next Republican government are both on the rise, a change in conservative leadership across the Atlantic has gone fairly unnoticed.

After the initial shockwaves of the Leave victory in the Brexit referendum in the United Kingdom (UK) this June, then-Prime Minister David Cameron resigned and Theresa May, who had until then been the government’s Home Secretary, won the bid to become the UK’s new Prime Minister. While May has been involved in conservative party politics for nearly two decades, she is now only the second woman to be Prime Minister of the UK, the first being the infamous ‘Iron Lady’ Margaret Thatcher. Because of this fact, May faces scrutiny for not only how she will lead the country’s exit from the European Union (EU) but also her parallelism to her only female predecessor.

Upon an initial and more trivial first glance, certain characteristics do make the comparison between the two female leaders favourable: experience in Conservative Party politics, a humble middle class background, gains in a time of relative political chaos, and of course, the fact that both Thatcher and May are older, conservative, white women. And while their policy plans differ, both women started their careers off in a similar fashion.

Nursing her political ambitions from early, May worked at the Bank of England and later as the head of the European Affairs Unit of the Association for Payment Clearing Services before being elected to Parliament in 1997 from Maidenhead, Berkshire. Once in government, May served as a shadow education secretary, party chairman, shadow leader of the House of Commons, and shadow work and pensions secretary, until she was appointed as Home Secretary under the Cameron government in 2010.

As the Remain and Leave sides of the Brexit campaign were taking constant swings at each other and amongst themselves, May stood outside the fray quietly advocating the Remain side. While the Conservative Party itself remains divided after the results of the Brexit referendum and David Cameron’s resignation, Prime Minister May faces weak opposition from other parties such as Labour and UK Independence Party (UKIP), as both parties scramble to fill power vacuums and amend party policies under the implications of Brexit.

It was in much the same way Thatcher first gained power. Her first parliamentary appointment came during the Conservative ‘sweep’ in 1959 when she won a ‘safety’ seat in Finchley. Until 1974, when she ran against the then-incumbent Conservative leader Edward Heath after the party’s defeat in the national election, Thatcher had worked as the parliamentary under-secretary for pensions and national insurance, several shadow ministerial positions, and the minister for education in Edward Heath’s cabinet. Emerging as the new Conservative Party leader in 1974, Margaret Thatcher scaled party policies markedly further to the right to win against the then-incumbent but weakened Labour Party in 1979, ultimately becoming Prime Minister.

Throughout her 11 years in office, Thatcher steadfastly held on to principles of individualism and economic neoliberalism, core values of an ideology now seen as ‘Thatcherism’, and consolidated herself as a powerful, yet wildly controversial, political leader. While Theresa May is only a couple months into her Prime Ministership, she will not face a general election until 2020 where it can be better concluded whether she is truly the ‘next Iron Lady’. Until then, comparisons between the policies of Thatcher and May present a complex, if not a contradictory, picture.

In the realm of worker’s rights, Thatcher was seen as an impediment to their progression, particularly after her firmness against the Miner’s Strike in March 1984, a move which is widely regarded as having weakened the UK’s trade union movement as a whole. Prime Minister May takes a different approach; while she has not distinctly mentioned unions, the new leader has pledged to place worker’s rights at the centre of the ‘new’ Conservative Party’s politics, including guaranteed representation for workers on company boards. Indeed, this contrasts how Thatcher had referred to the working class, particularly when she addressed union workers verbatim as “the enemy within.”

Margaret Thatcher famously rerouted the British economy in an individualist and neoliberal direction and de-regulated financial institutions in London, paving the way for the city to become the global financial hub. While May has expressed no plans for a reworking of the economy as Thatcher had, she keeps in line with economic policies that Thatcher herself instilled in the Conservative Party.

Thatcher and May also held some more ‘progressive’ social policies in their own times; Thatcher supported the decriminalization of homosexuality in the 1960s while May supported same-sex marriage in early 2000s. Other social and public policies May holds are more difficult to categorize, from her plan to increase internet surveillance to combat terrorism, addressing problems of corruption among law enforcement, lowering the legal limit on abortion, and pushing for more action on domestic violence.

Perhaps the most fascinating contrast between the women is their stance on the United Kingdom’s relationship, or lack thereof, with Europe, a subject which opened up the Conservative leadership to May in the first place. Thatcher was staunchly anti-Europe throughout her time in Parliament and as Prime Minister, and even after leaving politics. While May supported the Remain side during the Brexit campaign, some of her policies seem more aligned with those of Leave supporters, particularly her stance on immigration which arguably resembles a significant factor contributing to the Leave victory. As the Home Secretary, May put a number of exclusionary policies forward, such as revoking the old two-year visa for international students following their degree completion in the UK and raising minimum salary requirements for immigrants already living in the UK regardless of their spousal income. While May has promised to stick to the Brexit results and has pledged to begin negotiations on the exit by March 2017, these policies and several others like them suggest that if May truly believed in the Remain campaign, she did for economic rather than social reasons.

With any leadership transition, there are bound to be comparisons, but May’s ascension to power seems subject to scrutiny simply because she is a woman. Relative to comparing her to her immediate predecessor Cameron, media and the public have been wildly interested in comparing her to Thatcher, and other female politicians such as the German Chancellor Angela Merkel – and there is no shortage of articles on the subject.  As Margaret Thatcher certainly paved the way for female political leadership in the UK, she did so at the price of simultaneously being praised and cut down, portrayed as the ‘mother of the nation’ alongside the ‘Iron Lady’. The public and media will always attempt to categorize multi-dimensional women and strong leaders like Thatcher and May into female archetypes or stereotypes: this is a challenge that all women in politics or positions of power face today.

In all, Theresa May has only been in power for a couple of months, so while we can identify her policy stances and goals, we have yet to see how much of that will or will not come to fruition as she tries to stake a name for herself as more than a ‘Brexit’ Prime Minister.