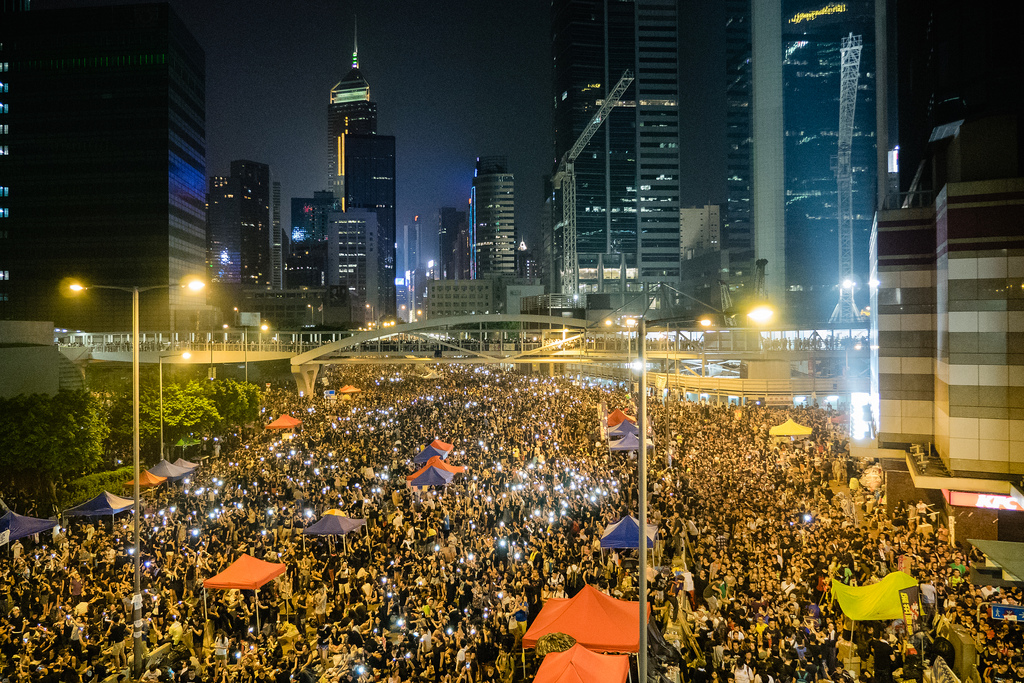 The Umbrella Revolution took over much of Hong Kong goo.gl/FOS72j
Share

On October 12, two young legislators from Hong Kong, Baggio Leung and Yau Wai-ching, used their Legislative Council oath-taking ceremony as an opportunity to denounce China and promote their pro-independent Hong Kong sentiments. During the mandatory ceremony before sitting on the Legislative Council, the two adjusted the verbiage of the oath by using a derogatory term for China, and in doing so the pair invalidated their claims to the Council. The young lawmakers’ actions have sparked controversy throughout Hong Kong as demonstrations have erupted both protesting and supporting their claims. Such actions have once again highlighted the ongoing question of independence that has long clouded Hong Kong.

Hong Kong was originally ceded to the British from China after the First Opium War in 1841, and other parts of the island were further leased to the British in 1860 and 1898. The Chinese always planned on Hong Kong returning under its umbrella, but such sentiments were silenced when Britain resumed control of the area after a three-year period of Japanese occupation during the Second World War. There were small decolonization movements in the post-war period, mainly from small political parties, but such advocacy never garnered substantial support.

Any independence movement was further constrained when the British and the Chinese signed on the Sino-British Joint Declaration, which agreed that Hong Kong’s sovereignty would transfer back to China in 1997. The major concession was that Hong Kong should be able to maintain their democratic institutions and enjoy a high degree of autonomy which developed into the idea of “one country, two systems”. Hong Kong was allowed to keep its capitalist economy, its judicial independence, and political autonomy for the next fifty years while the Joint Declaration held.

Since this time, Beijing has continued to make its presence known in Hong Kong. It has tightened down on local unrest and has slowly begun intervening in governing policy. Many of these encroachments from Beijing, including educational reforms in 2012 that many locals believed focused too much on praise for the Communist Party of China, have been met with resistance.

In 2014, the Standing Committee of the National People’s Congress (NPCSC) instituted a policy that any candidate for the Chief Executive — the head of the Government of Hong Kong — must be screened by a Beijing-controlled selection committee. This was arguably China’s most intrusive involvement in the politics of Hong Kong, and it sparked a 79 day-long mass protest for a democratic system free from the Chinese influence. The protesters viewed the latest Chinese acts as the end to the “one country, two systems” policy, and believed that the only hope for a truly democratic Hong Kong was through total independent sovereignty.

This Umbrella Revolution was opposed by many locals, and anti-protest movements denouncing the revolution illustrated just how large the cleavage is within Hong Kong on the topic of independence. It was further condemned by Hong Kong and Beijing officials, with the latter blaming Western interference as poisoning the minds of the protesters. The Umbrella Movement found a strong foundation in youth groups, but the divisive protests and the ideological differences propagated by the movement even split local families during the three month period in 2014.

Such activism has done little to impede China’s attempts to crack down on Hong Kong and it appears that Beijing is becoming less subtle with their attempts to trump any anti-China sentiments. Most recently, in 2015, five local Hong Kong book store workers went missing; their store, Causeway Bay Books, reportedly lacked restriction on the material they sold, suggesting that they knowingly sold works that shed negative light on China. What followed were conflicting reports on their whereabouts, but many assumed they had been detained by Chinese officials. Weeks later, the men appeared on Chinese television claiming they had willfully come to China and had committed crimes during their stay. However, these skeptical claims were further discredited when one of the captors months later admitted that he was not allowed to contact his family and had been in solitary confinement for up to eight-months. For many, it was evident that these men were taken by Chinese officials and blamed for the bookstores’ open policies.

These contentions and China’s growing influence in Hong Kong have created a tense environment where any sign of independence rhetoric is swiftly denounced by those who are either fearful of China cracking down or those that believe Hong Kong is in its rightful place under the Chinese sovereignty. So when the two young and pro-independent legislators, Leung and Wai-ching, misspoke their oaths in a blatantly anti-China statement, there was an immediate backlash.

Before the incident, it had appeared that China did a successful job in quelling independent sentiments. While many Hong Kong locals fear Chinese reactions to such sentiments, others are simply ambivalent towards independence. Many simply want to maintain the status quo and believe public outcries, such as these young legislators’ actions and the Umbrella Revolution simply bring too much uncertainty to Hong Kong. For China, the best way to defeat calls for independence is not to use autocratic means to silence those responsible, but to allow the citizens of Hong Kong to mediate and denounce among them those that are looking to stir the pot.

Thus, China made a critical error by getting further involved in the legislator oath controversy. There was little question that the mockery that had taken place at the oath ceremony was against the law of the Legislative Council and broke the codified protocol. Likewise, no one doubted whether these oaths should be taken legitimately and that these two legislators should not be allowed to take up their positions until they redo the process through the regular scripted means. Yet, China took it one step further, by NPCSC issuing a statement on November 15th that China is “determined to firmly confront the pro-independence forces without any ambiguity.” in regards to Hong Kong’s Basic Law

Whether this was a breach of Hong Kong’s judicial independence is difficult to answer, as China was within their legal right to rule on the issue. However, such an unnecessarily strong ruling will only further reinforce the belief China is overstepping on their jurisdiction within Hong Kong; a forceful exertion to quell the independent sentiments could actually annul their own progress. The independence movements within Hong Kong may be rooted in only the voices of the youth minority, but it is without question that these voices will not be silenced any time soon.