Silencing a Visual Culture of Protest 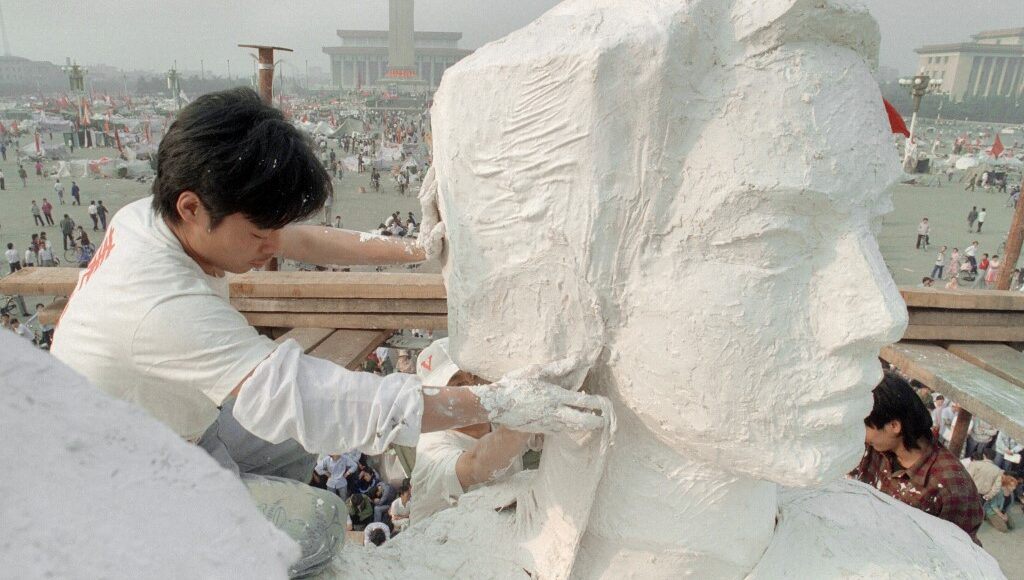 During Hong Kong’s major pro-democracy protests, artistic monuments have consistently been used to express the city’s collective grief over their loss of democracy and to foster a sense of political unity. The start of this tradition might be traced back to the Goddess of Democracy, initially erected in 1989 during the Tiananmen Square protests in Beijing. In an attempt to bolster the waning spirits of the protestors, students of the Central Academy of Fine Arts worked hastily to construct and transport the monument to the square. On June 4th, five days after its installation, the statue was deemed antithetical to state values and bulldozed to the ground.

Later that day, protestors were massacred, and the nearly two-month-long protest came to a halt. Hong Kong’s annual June 4th vigil began shortly thereafter to commemorate these victims. However, for the last two years, it has been prohibited by the government citing the ongoing pandemic, despite the city having one of the world’s lowest rates of active cases. Nonetheless, a variety of monuments have been erected at these protests, only to be censored by the government’s increasingly stringent legislation.

Multiple replicas of the Goddess of Democracy have been reproduced at different vigils, the most recent of which was constructed for the 2008 event. It was stored at the Chinese University of Hong Kong until December 24th, 2021, when the university removed it citing safety and legal concerns. The statue’s fragility reportedly posed an issue of physical safety, while the act of displaying it was thought to be legally precarious under the colonial-era sedition law.

Sedition is defined as any language which incites insurrection toward the state. The colonial sedition law, implemented in 1938, was enacted by the British government to prohibit pro-China sentiment against the British monarchy. Compared to the National Security Law (NSL) it proposed much milder penalties and had not been used since the 1960s. Perhaps most importantly, it was regulated by the 1991 Hong Kong Bill of Rights Ordinance, which stated that any restriction of freedom of expression must be necessary, reasonable, and well-defined, as outlined by the standards of the United Nations’ International Covenant on Civil and Political Rights. By contrast, the NSL has enabled government surveillance, does not necessitate explanation or justification for arrests based on sedition, and threatens life in prison as a punishment. What’s more, the NSL was specifically drafted to cease and prohibit the major pro-democracy protests that took place in 2014 and 2019, while the British government drafted the colonial-era law in light of “hostilities” from the Chinese government in the early 20th century.

To be clear, modern-day Hong Kong is a product of British imperialism and was not free from oppression under colonial rule. However, following China’s loss in the First Opium War and their subsequent cession of Hong Kong to Britain, the colonial government built an enormous amount of infrastructure that contributed greatly to the city’s development as a major global entrepôt. While similarities most definitely exist between the British colonization of Hong Kong and China’s contemporary desire to reabsorb, oppress, and reform the city, Hong Kong has traditionally been a haven for citizens who sought refuge from China’s political turmoil throughout the 19th and 20th centuries. As such, pro-China sentiment was limited, and not because of the colonial anti-sedition legislation. The British occupation of Hong Kong, though not unproblematic, created a society that was more democratic than China has been throughout the 20th century, and more than what Hong Kong will be, should China regain total control of the city.

All this to say, the colonial-era sedition law was unfairly cited as a precedent for the implementation of the NSL. The colonial law had not historically been used to justify violating freedom of expression like the NSL currently is. The reasons cited for the removal of the Goddess of Democracy thus exemplifies a realization of China’s efforts to eradicate any semblance of democracy in Hong Kong by legislating censorship.

Another pro-democracy monument, titled The Pillar of Shame, was constructed in 1997 by Jens Galschiot. The sculpture was part of a series intended by the artist to honour various international instances of mass political violence and loss. Each version features a cascade of fifty bodies melded into a towering obelisk. It remained on the Hong Kong University campus for over twenty years before being discreetly removed in the middle of the night in December of 2021, six months after the vigil was banned for the second consecutive year and one day before the removal of the Goddess of Democracy. Ultimately, both removals contribute to an emerging theme of silencing Hong Kong’s visual culture of protest and thus raise questions about the didactic power of art.

Historically, art has been used as a didactic tool for upholding social values. This has been incredibly beneficial in the case of the two aforementioned monuments and their struggle to preserve the democratic spirit of Hong Kong. The equal capacity that art has for social control, however, is well documented. Look no further than Mussolini’s artistic censorship during the interwar period in Italy. Architecture was state-funded, resulting in architects necessarily conforming to fascist ideals in order to receive funding. By effectively preventing any non-conforming architectural projects from reaching fruition, Mussolini was able to construct a unified, fascist aesthetic using censorship. State control of the funding, policies, or in Hong Kong’s case, the laws that dictate what art can and cannot exist, are a form of authoritarian censorship. While art is a powerful tool for bolstering social identity, it can just as easily be exploited to control it.

Featured Image: A student adds final touches to the Goddess of Democracy as it is assembled in Tiananmen Square. Photo by Catherine Henriette for the HKFP . Licensed under CC BY 2.0.