The Zapatistas and Systemic Inequality in Mexico 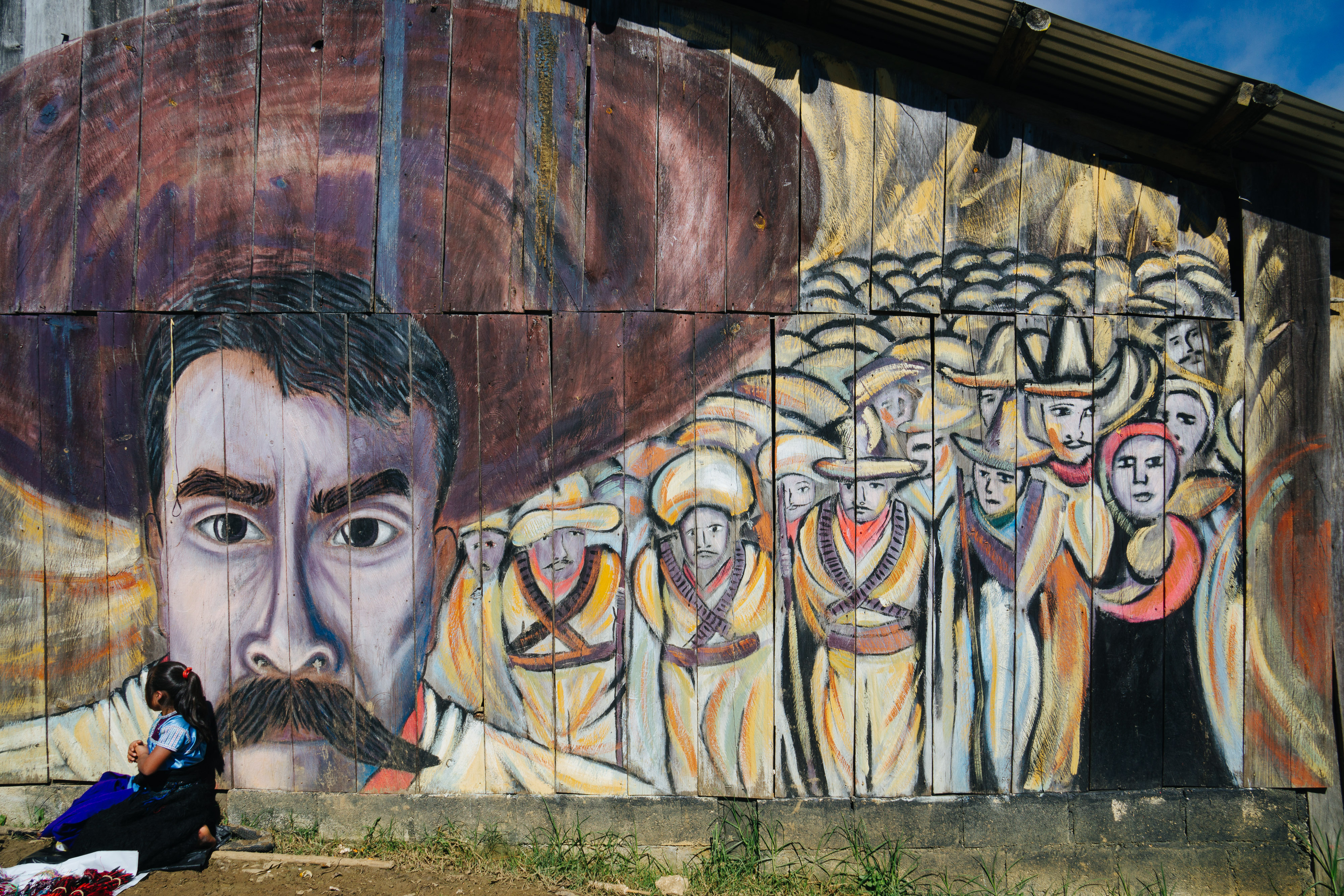 The post-Cold War era is rife with examples of insurgencies and intrastate conflicts that blur the lines between military forces, militias, rebel groups, guerrillas, and civilians, thoroughly complicating the work of both political scientists and security analysts. Broad terms like violent non-state actor (VNSA) and fourth-generation warfare (4GW) have been adopted to address this ever-changing nature of war and the decentralisation of violence, with varying levels of usefulness. The strength—if one may call it that—of a theory like 4GW lies in its intended vagueness and malleability, allowing academics to study the Irish Troubles and the Rwandan civil war in the same breadth.

Yet, even within these contemporary parameters, the ongoing Chiapas conflict in southern Mexico defies easy classification, and perhaps for this very reason, it is egregiously underrepresented in conflict studies and similar fields. Regrettably, government infringement on the rights of indigenous and rural populations is commonplace throughout the world, but in Chiapas, the Ejército Zapatista de Liberación Nacional (EZLN or Zapatistas)’s remarkable success in obtaining relative autonomy over local municipalities1 and highlighting the larger inequities plaguing Mexican society deserves particular attention. The Zapatistas, a libertarian Marxist group representing numerous indigenous peoples, rose up against a long history of structural imbalances in resource distribution and socioeconomic marginalisation of the rural poor in Chiapas, the lowest-ranked Mexican state in the United Nations’ Human Development Index2, where about 75% of the population lives below the global poverty line (less than USD$1.25/day).3

During the 1950s and ’60s, the Mexican government relocated thousands of indigenas (indigenous peoples, primarily Maya communities) and campesinos (peasants) to former European-held lands in the Lacandon Jungle.4 This—in conjunction with a steady influx of migrants from other parts of the state, as well as from neighbouring states and Guatemala—placed increasing ecological strain on the region, rendering it unable to support the needs of its rapidly rising population.5 Moreover, elite agricultural producers perverted land reforms to further enrich themselves. The average land endowment for commercial production in Chiapas is about twenty hectares, compared to just two for subsistence farmers, and due to the ruling Partido Revolucionario Institucional (PRI)’s control of the transportation sector and market access, prices for smaller producers’ agricultural goods rarely reflected the products’ true value.6 Thomas Homer-Dixon, director of the Trudeau Centre for Peace and Conflict Studies at the University of Toronto, describes a “situation of deeply institutionalised economic marginalisation” in Chiapas, actively reinforced by government corruption and corporate patronage.7 By 1990, over 87% of the state’s agricultural producers had no access to public or private credit, and President Salinas’ economic liberalisation policies—including deep cuts to farming subsidies and private capitalisation of agriculture—were bringing structural inequalities in Chiapas to a tipping point.8 Smaller agricultural producers, vastly overpowered by capital-intensive corporations, were forced to turn to bare subsistence farming. Thousands of peasants, unable to find suitable land in the new economic environment, had to abandon agriculture altogether and instead work as seasonal labourers for latifundistas (small, elite class of large landowners).9

The accumulation and eventual apex of these legitimate grievances galvanised support behind the EZLN and its charismatic leader, Subcomandante Marcos. On the morning of January 1, 1994, the day the North American Free Trade Agreement (NAFTA) went into effect, the Zapatistas captured the world’s attention by taking control of six towns in central and eastern Chiapas, freeing political prisoners in the former colonial seat of San Cristóbal de Las Casas and burning several government buildings. Denouncing NAFTA as a “death sentence for indigenous peoples”10 and declaring war on the illegitimate Mexican state, Subcomandante Marcos led about 3,000 armed peasants in a rebellion that lasted twelve days before military forces violently suppressed the insurgency and esteemed liberation theologian Samuel Ruiz negotiated an uneasy ceasefire.11 The Zapatistas’ initial military defeat, however, was just the beginning of the greater socio-political revolution underway in Chiapas.

In February 1996, gridlock between the Zapatistas and the Mexican government was broken with the signing of the San Andrés Accords, expanding the land rights and political autonomy of the country’s indigenous population.12 However, the PRI, then under President Ernesto Zedillo, reneged on the treaty and failed to translate its accords into tangible action. The Zapatistas responded by breaking of all dialogue with the government and establishing their own alternative forms of government. Today, there are five autonomous caracoles (local municipalities) across Chiapas in which the Zapatistas oversee their communities, independent of government support or interference.13 These closed caracoles operate their own schools, healthcare clinics, and subsistence farms, in addition to practising a horizontal organisational structure—called the Good Government Junta—that rotates membership between different members of the five caracoles every two weeks, ensuring a completely-inclusive form of direct democracy.14

Having evolved from a revolutionary group seeking to overthrow the Mexican state to a localised civil resistance movement, the EZLN represents, in many ways, an idyllic manifestation of libertarian Marxism and exemplifies the potential success that can be achieved by subverting a system from the outside, rather than within its entrenched prejudicial parameters. To be sure, Chiapas is still plagued by endemic poverty, but the Zapatistas—through their commitment to representative grassroots democracy—are clearly more in-tune with the concerns of their local communities than government bureaucrats, and the caracoles have already made substantial gains in gender equality, education, and access to food.15 One must remember that development encompasses far more than just material wealth; while Salinas’ economic liberalisation policies undoubtedly increased Mexico’s GDP and stimulated strong private-sector growth, income inequality significantly worsened under his administration, to say nothing of persistent political and social imbalances.16

The Zapatistas certainly provide hope to historically marginalised people, both domestically and abroad, but little has been achieved in Mexico beyond their caracoles. After a 12-year period characterised by lackluster economic growth and widespread electoral fraud, in which the right-wing National Action Party held a plurality in both legislative houses, the PRI has been back in power since 2012. Current president Enrique Peña Nieto publicly promotes more equitable agrarian reforms and greater protection of indigenous rights,17 but in practise, progress on these issues has been virtually nonexistent, overshadowed by the Mexican government’s failed War on Drugs and the kidnapping of 43 university students last September in Iguala. Meanwhile, Chiapas continues to suffer from many of the country’s worst injustices. In areas of the state outside EZLN control, local elites exploit peasants’ labour for personal gain and paramilitaries frequently harass or outright attack indigenous communities accused of supporting the Zapatistas. In the most notable incident, a paramilitary group known as Mascara Roja massacred 47 unarmed people in the small village of Acteal in December 1997,18 triggering international condemnation of the Mexican state’s complicity in paramilitary violence and the near-collapse of a free trade agreement with the European Commission.

These systemic inequalities and institutional examples of oppression must be considered in any honest evaluation of the EZLN’s achievements. Although an extraordinary testament to the potential power of grassroots action against seemingly insurmountable odds, one that has influenced countless other social movements around the world, the Zapatista success story is still fundamentally limited to the local level. This, of course, is part of what makes the Zapatistas so pure and so unique among insurgencies. Their uncompromising commitment to the ideals of direct democracy, mutual aid, and social justice have arguably been made possible by the small-scale nature of their operations and by their leaders’ rational assessment of the group’s capabilities. Nevertheless, just as Emiliano Zapata’s peasant uprising in the 1910s inspired the Zapatistas, one hopes the Zapatista rebellion in Chiapas will ultimately give way to a broader grassroots revolution in Mexico, one that will finally eviscerate the country’s long history of social, economic, and political marginalisation.

4 Homer-Dixon, Thomas, and Philip Howard. “Environmental Scarcity and Violent Conflict: The Case of Chiapas, Mexico.” Project on Environment, Population, and Security. Washington, D.C.: American Association for the Advancement of Science and the University of Toronto, Jan. 1996. Web. 23 Mar. 2015. http://www.homerdixon.com/projects/eps/chiapas/chiapas1.htm

11 Rubin, Jeffrey W. “From Che to Marcos: The Changing Grassroots Left in Latin America.” Dissent Summer 2002. Print. Jeffrey W. Rubin is professor of history and research associate at the Institute for the Study of Economic Culture at Boston University. He is currently in Brazil doing research on democracy and grassroots innovation with a grant from the John D. and Catherine T. MacArthur Foundation.