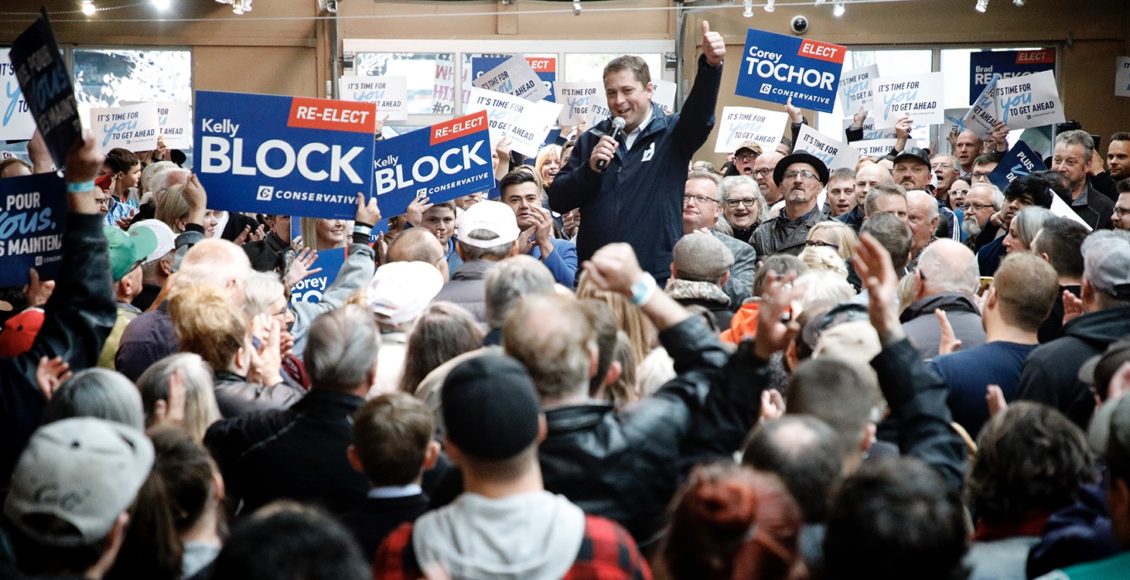 Andrew Scheer at a campaign rally in Saskatoon, where he has widespread support. Licensed under CCO 1.0 https://creativecommons.org/publicdomain/zero/1.0/
Share

On October 21, Justin Trudeau was granted a second term as Prime Minister of Canada, although not without a major hit to his party’s standing in parliament. Dropping from 184 to  157 seats, Trudeau fell short of the 170 Members of Parliament required to form a majority government.

Shrinking support for the Liberals doesn’t come as a surprise. The party’s handling of the SNC-Lavalin scandal earlier this year, along with Trudeau’s various mishaps during the campaign, disappointed some long-time liberal voters. More importantly, a general sense that the Liberal government failed to deliver on its ambitious 2015 promises has caused many voters to shift away from the party.

Perhaps more telling of the Canadian political landscape than Liberal retreat is the Conservative Party’s win of the popular vote. Reaping 34.4% of the vote, the party outperformed the Liberals by a small margin. Much of these votes hailed from Alberta and Saskatchewan—provinces in which every riding, excluding one in urban Edmonton, was claimed by a Conservative candidate. While other provinces largely chose to support progressive parties in general, the Prairies reaffirmed their conservative views.

Roots of the East-West political divide

The political divide between the Prairies and the other Canadian provinces has been a central topic in Canadian politics for some time. When trying to explain this divide, many have focused often too narrowly on the economic tensions stemming from the Prairies’ reliance on a resource extraction industry, particularly fossil fuels. Combined with the increasing attention given to climate change, this reality has created disagreements over policies regarding resource extraction in Canada. Throughout the years, conservative governments have championed this industry, pushing for new pipelines and other fossil fuel-friendly policies, as well as fighting against a nation-wide carbon tax.

Between 2015 and 2019, the Trudeau government tried to strike a balance between stimulating the Prairies’ economy and enforcing better environmental regulation. Ultimately, this has failed to create support for Liberals West of Manitoba – and with reason, some might argue. Economic data shows that Alberta’s economy has faced numerous downturns since 2015, when it entered into a severe recession. As of 2019, the province faces mild recession, with an economic growth rate of -0.8%. Saskatchewan faces a similar economic reality. Individuals losing income and jobs now view continuous economic hardship as going hand in hand with a Liberal government, pushing them further into the conservative base.

An interesting observation can be made about the geography of this divide. Generally speaking, support for progressive parties stems largely from urban, densely populated areas. According to data collected during this past campaign, the opposite is also true: less populated and rural ridings mostly lean blue. Due to their large territory and relatively small population, the Prairies’ ridings tend to be less densely populated, which is coherent with their strong preference towards the Conservative Party. This rule extends well beyond the Prairies, with similar observations ringing true in most provinces across the country. Seen this way, the East-West political divide appears to stem from a more widespread urban-rural divide.

Still, there remains a Prairie-specific sentiment of alienation, which simultaneously fuels and is fuelled by the dissatisfaction surrounding liberal policies. To understand the roots of this feeling, it is useful to look at Alberta’s—and to a lesser extent, Saskatchewan’s—contribution to Canada’s GDP and how it relates to the province’s economic situation. In recent years, although it has suffered from a sluggish economy, Alberta has remained the largest net contributor to Canada’s GDP, thanks to its large oil revenue. To most Albertans, this situation seems unfair, and shows that Alberta has been left behind by the federal government. In addition to this, many view the current equalization payment system as particularly disadvantageous to the Prairies. This federal cash transfer framework, designed to offset provincial differences in fiscal capacity, is unpopular in Western Canada. Although statements like these are widely criticized by experts, sensationalist claims by politicians have engrained them in public opinion, escalating the tensions that support the political divide.

Implications of the current political context

The current political context is very much characterized by an array of competing interests, sometimes cross-cutting at various levels of government. At first glance, a minority liberal government may seem like a small victory for the Prairies’ conservatives. Because a minority prevents liberals from holding the power to pass legislation on their own, they will need to create coalitions with other parties if they hope to get things done. In that case, Liberals would seek the cooperation of MPs belonging to the NDP or the Bloc Québécois—two parties that stand in stark contrast with the Conservatives due to their largely progressive values, and the Bloc’s pro-Quebec bias. For such a coalition to happen and remain viable, the Liberals would need to make concessions and lean to the left, causing its policies to stray further away from conservative ideas. Undoubtedly, this would further deepen the political divide.

The rise of conservative parties at the provincial level is also a factor that has the potential to shape the national political divide. The recent election of two conservative premiers, Scott Moe and Jason Kenney, in Saskatchewan and Alberta, respectively, has cemented the provinces’ conservative allegiance. Both are expected to oppose some national policies, namely regarding climate change, creating a rift between provincial and national politics. Jason Kenney’s outspoken criticism of Trudeau’s federal carbon tax, which he deems as “the perfect illustration of socialist ideology”, is a clear-cut example of tension between both levels of government.

It seems unlikely that this division will subside, at least in the coming years. In Alberta, Peter Downing’s ‘Wexit’ movement—a nod to UK’s Brexit—is gaining momentum. Inspired by the success of the Bloc Québécois, the group applied to become a registered federal party and their application seems to fulfill all necessary requirements. Although an outright referendum on separation seems highly unlikely, the sheer presence of a nationalist party on the mainstream political stage could help advance the Prairie’s agenda.

Tracking the evolution of this political divide over time will be an interesting exercise, given that there is no clear path towards bridging it. Its pervasiveness underscores the need for better cooperation between different levels of government, which is no easy task. At its core, this fracture highlights some fundamental challenges associated with governing a country made of numerous groups with competing interests. Underpinned by strong urban-rural contrasts and fuelled by increasingly polarized political discourse, this divide will likely be a defining feature in Canadian politics for years to come.

Featured Image: Andrew Scheer at a campaign rally in Saskatoon, where he has widespread support. Photo by Andrew Scheer, licensed under CCO 1.0