Weren’t you taught any better? Education and Antisemitism 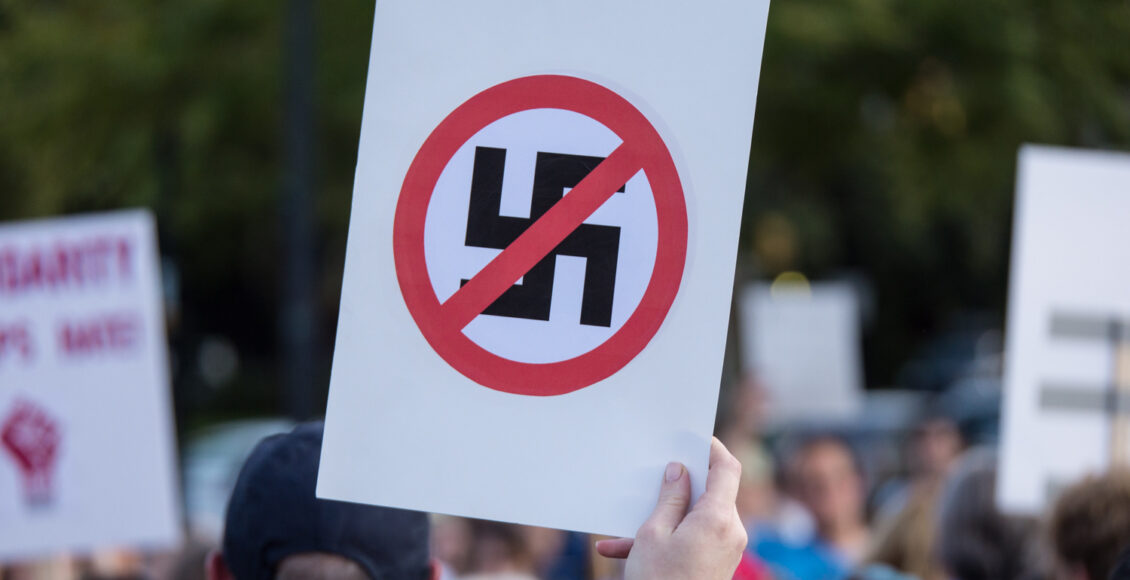 Antisemitic symbols figured prominently amidst the many symbols of hate and intolerance at the Capitol insurrection on January 6. Among the makeshift gallows and Confederate flags appeared such things as hats and patches reading RWDS (Right-Wing Death Squad), a hoodie emblazoned with the words “Camp Auschwitz” and “Staff,” Nationalist Social Club stickers, Fraktur lettering (the font of Nazi propaganda), signs reading “circumcision is the mark of the beast of Satan,” and Crusader Crosses — a symbol appropriated by the far-right to signify the waging of a divine war against Jews and Muslims. Underneath the Capitol Dome, protesters chanted “America First!” Were they aware that the phrase, repopularized by Donald Trump during his 2016 Presidential campaign, was coined in 1940 by American Nazi-sympathizers urging President Roosevelt not to enter WWII?

Antisemitism is the rhetorical and physical manifestation of hatred towards Jews, driven by a poor or misinformed perception of Judaism and the role of Jewish people in the world. The images from the Capitol Riot are particularly hard-hitting, because they reflect the recent rise of antisemitism and extreme right-wing nationalism in the United States and around the world. The Anti-Defamation League describes contemporary levels of antisemitism as the highest in 40 years. 75 years after the Holocaust, the question remains, have we learned nothing from the past?

Antisemitism in the United States today

Antisemitism is a beast of many names, ranging from violent assaults, to damaging rhetoric, to constant trivialization. The alt-right is responsible for much of the virulent hate and conspiracies circulated about Jewish people in modern America. Between 2018 and 2019, violent assaults targeting Jewish persons rose by a staggering 56 per cent. The 2019 Audit of Antisemitic Incidents found that there are, on average, six antisemitic incidents per day in the United States. Groups like the Proud Boys, NSC, Aryan Brotherhood, and QAnon embrace crackpot theories of affluent Jews seated at the head of a world-dominating cabal. Proud Boys, clad in their black and yellow, often feature the slogan 6MWE (Six Million Was Not Enough), referring to the approximately six million Jews murdered in the Holocaust. Alt-right leader Nicholas Fuentes hosts the popular program “America First,” on which he expounds on Holocaust denial and demographic purity. Once even mockingly comparing the Holocaust to a cookie-baking operation, Fuentes has chillingly reported that his audience consists primarily of GenZ-ers.

The US government hasn’t been spared from this spike in antisemitic sentiment. Over the past four years, President Trump and his cronies have given antisemitic elements ample license to say and do what they wish with relative impunity. The President previously excused and even praised the actions of alt-right activists, stating that the 2017 Charlottesville rally had “very fine people on both sides.” Never mind that one side — the side that brutally murdered an Anti-White-Supremacy protester — included Klansmen, Neo-Nazis, and white supremacists in their ranks. At the legislative level, incoming GOP Congresswomen Lauren Boebert, Mary Miller, and Marjorie Taylor Greene have recently made headlines for their far-right leanings. Rep. Miller received backlash after publicly praising Hitler’s indoctrination of youth, declaring, “Hitler was right about one thing,” while Representative Boebert and Greene were widely criticized for their support of conspiracy networks, notably QAnon, which propagates theories of a Jewish deep-state. Greene, in particular, has made damaging statements affiliating the 2018 California wildfires with a space laser tenuously owned by Jewish financiers, and supporting the theory of “Great Replacement.” This conspiracy posits powerful Jews masterminding Muslim immigration into Europe in the hopes of inducing “white genocide.” These infractions have gone largely unpunished by the Republican Party, in which only 11 out of 211 representatives voted to remove Greene from her Committee positions.

However, attributing antisemitism entirely to the far right is a mistake. Antisemitism doesn’t manifest purely through fanatics peddling conspiracy theories about Judaic overlords and hoping for the second coming of Hitler. Recent months have seen a surge of online content comparing COVID-19 lockdowns to Nazi Germany and COVID-19 itself to the Holocaust. Poster campaigns depicting pro-lockdown government officials as modern Hitlers have circulated widely in anti-lockdown circles. California Governor Gavin Newsom has been photoshopped with a Hitler-moustache in front of a Nazi flag, while Kansas Governor Laura Kelly was depicted supervising Jews being loaded onto camp-bound train cars. Some politicians have jumped onto this bandwagon in an effort to capitalize on this sentiment. For example, Idaho Representative Heather Scott compared COVID lockdowns to Nazi Germany, referring to the state’s governor as a “Little Hitler,” and describing non-essential workers being proverbially “put on a train” and carted off, as Jews were during the Shoah.

Why is it this way?

Though such comments need not be deliberately malicious, they reveal a profound misunderstanding and lack of appreciation for the extent of suffering that transpired under Hitlarian rule. There is truly no comparison between a COVID-19 lockdown and the totalitarian rule of a fascist dictator. Nor is there a comparison to be made between an intentional genocide and the scourge of a pandemic. So, to answer my earlier question: perhaps we truly have not learned much from the lessons of the past. In fact, the tide of antisemitism sweeping the country can be traced back to one thing: education, or lack thereof. Combined with the propagation of misinformation and the damaging actions of high-level officials, antisemitism has grown largely unchecked.

The International Holocaust Remembrance Alliance has repeatedly emphasized the need for Holocaust education, and its important role in combatting antisemitism. However, Americans remain widely uneducated with regards to the Holocaust, a trend that seems to be worsening with time. A Claims Conference Survey has reported that 45 per cent of surveyed Americans were unable to identify a single ghetto or concentration camp, and that 66 per cent of Millennials didn’t know what Auschwitz was — compared to 41 per cent of all US adults. In fact, 22 per cent of Millennial respondents had never heard of the Holocaust at all. A Pew Forum Research study found that 55 per cent of surveyed Americans didn’t know how many Jews perished in the Holocaust, with 14 per cent submitting answers between zero and three million. Importantly, the Forum also reported younger Americans are, on average, far less knowledgeable about the Holocaust than their elders.

This startling lack of knowledge is hardly surprising, considering only 16 states mandate Holocaust education as part of the public school curriculum. And even where it is mandated, such schooling has often been reduced to a one-day event on Holocaust Remembrance Day. What was once taught in class is now being learned for many through social media and movies; hardly reliable sources of information — especially with the aforementioned conspiracists and characters running rampant online.

This absence of relevant instruction produces an immense lack of understanding, leaving younger generations prone not only to ignorant trivialization, but also to the abundance of misinformation and hateful rhetoric propagated online. Remembrance and understanding are crucial counters to fear and hate, and far better achieved through comprehensive education than through Hollywood’s many theatrical renditions of WWII and the Shoah. The Claims Conference Survey found that 93 per cent of surveyed adults agreed that “all students should learn about the Holocaust while at school.” So perhaps there’s a ray of hope. Through not an end-all-be-all solution, fighting antisemitism undeniably begins in the classroom.

Featured image: “Charlottesville-1520268” taken by Mark Dixon and licensed under CC BY 2.0