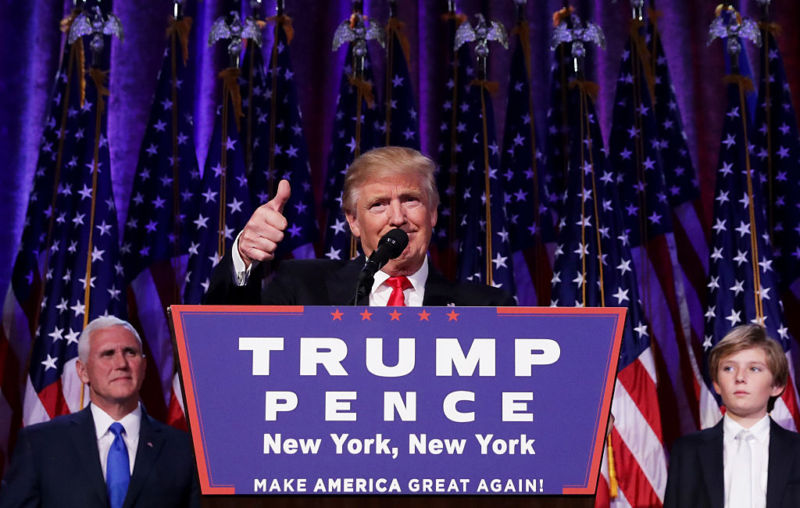 The final portion of Trump’s 100 day plan addresses specific actions that he would like to see undertaken in Congress. While he has a variety of priorities, many of them will result in benefits for the wealthiest Americans. These policies will exacerbate inequality, going against the narrative of the disaffected poor white worker that he campaigned on.

Trump’s first priority is the “Middle Class Tax Relief and Simplification Act,” which he claims will produce 4% growth rate and create millions of jobs. The act involves reducing the number of tax brackets and decreasing corporate and business tax. These policies are packaged as helping the “middle class” but will likely benefit the upper class the most, and could actually raise taxes for some low-income Americans. While he claims these cuts would produce economic growth, their positive effect relies on the disputed concept of trickle-down economics. These policies would certainly decrease government revenue and increase the budget deficit, which will not be good for the economy. He will probably face challenges from members of both parties who hold concerns about increasing the national debt. Trump has marketed himself as a populist leader but this act is just another instance of his limited appeal. He has shown his prioritization of the middle and upper class over people who actually need tax relief.

Trump’s “American Energy and Infrastructure Act” aims to create tax incentives for companies to invest in infrastructure while remaining revenue neutral. Plans like the one Trump suggests are often covers for cronyism and encourage debt. Traditional routes of government-led infrastructure building is what seems best for the US. It is unlikely that Trump’s changes will efficiently and effectively provide the roads, bridges, and public transportation that America desperately needs. This plan will likely benefit many of Trump’s assets and fails to achieve the necessary progress that America is in dire need of.

Next, Trump goes after education reform by ending the common core initiative and changing the way federal money is distributed. He wants to decentralize the curriculum and make education more affordable. While Trump’s plan is not outlined in detail, he will likely favour school choice programs backed by the Republican party, which are likely to pass in Congress. These types of programs revolve around giving federal money to individual states, which can then distribute funding to public, private, and charter schools as they please. Trump wants people to be able to choose between their schools, which often results in people with more opportunity and resources taking their kids elsewhere. This plan may decrease funding to public schools, exacerbating inequality in America’s education system. Trump also wants to make 2 and 4 year programs more affordable, and expand on vocational and technical training, which is a great initiative. However, he does not mention how much doing so would cost, nor does he explain where he will get the funding from. Further, Trump’s plan does not denote specific plans to deal with the student debt crisis. While America’s education is in need of reform, Trump not only does not address inequality in access to education, but actually contributes to it, and where there is an opportunity for positive changes, he provides no details regarding his policy.

Trump wants to institute the “Affordable Childcare and Eldercare Act,” which institutes new tax deductions and incentives employers to provide on-site services. It also creates tax-free savings dependent care accounts for low-income families. While this plan is well-intentioned, it is actually fairly misguided. Not only is he reneging on his promise to simplify the tax code, but the proposed deductions are most beneficial to the wealthy. Expecting employers to take on the program will likely provide further incentive to keep many people employed less than full time so that they do not have to provide these vital services. Furthermore, a savings bank account will only benefit those who have enough spare money to save, and not those that need affordable childcare most. Like many of Trump’s other programs, this will not benefit the most impoverished.

Trump’s “End Illegal Immigration Act” funds a wall on the border with Mexico and establishes prison sentences for illegal immigrants who attempt to re-enter the US. Trump claims that Mexico will pay for the wall, even though the Mexican President has publicly stated that they will not. Consequently, imprisoning thousands of illegal immigrants and building a wall will cost America billions of dollars. Furthermore, it does not make financial or legal sense to spend money and resources imprisoning foreign nationals when their only crime is crossing a border. It is unlikely that this will get through Congress because of its fiscal irresponsibility. Trump’s other  policy stances on immigration will result in the separation and displacement of families and this act ensures the separation will cost the government an exorbitant amount.

In line with Trump’s goal to return security and rule of law, the “Restoring Community Safety Act” creates a task force on violent crime and increases funding to police training programs. It also increases funding for federal law enforcement and prosecution to address gangs and violent crime. This plan is both misguided and potentially dangerous. The violent crime rate in the US is at the lowest point of the last 50 years. Unless training includes teaching police officers how to non-lethally diffuse a situation, these programs will likely increase racial tensions between police and black communities. 895 people have been killed by police this year, which should be a point of concern to  Trump. This act does nothing to address police violence and could end up exacerbating the situation by working against communities rather than with them.

Trump also wants to increase military spending and public programs for Veterans under the “Restoring National Security”. He wants to expand military investment despite the fact that the US spends more on their military than any other country in the world. This seems like a poor allocation of funds, and will increase the budget deficit. On the other hand, he wants to allow veterans to go to public and private doctors. This is a step in the right direction, as many veterans do not have access to healthcare, but does nothing to improve affordability. This plan also includes preparing against potential cyberattacks and the increased screening of immigrants. The benefits of both of these programs are highly dependent on how they are implemented. As Trump mentions previously in his 100 day plan, increased screening will probably target those with links to “terror-prone” countries and will likely stop the acceptance of refugees from certain areas of the world. Cyber security is has been a controversial issue during the last election cycle, and cyber security breaches are something we should look in to. This act is a hodgepodge of policy with the most direct result being an increase in the national debt.

Some of Trump’s plans overlap with things he has already discussed and I have previously written about. His anti-free trade policies are in line with his plan to “End the Offshoring Act,” which I have discussed in a previous article. The “Clean Up Corruption in Washington Act” discusses reducing special interests in Washington and generally reducing political corruption, which I discussed earlier in my anti-corruption article. I also discussed Obamacare under Trumps plan to “restore security.”

Overall, Trump’s plan will cost billions of dollars and provide the most tax breaks to the middle and upper class. He only directly addresses the cost when he can claim it will be revenue neutral or bring in money for the government. He has packaged himself as someone who knows how to run a country because of business experience by glossing over his personal bankruptcies and the actual costs of his proposed policies. Trump’s presidency may not be bad only for immigrants and minorities, but will also be disastrous for the economy and education system.