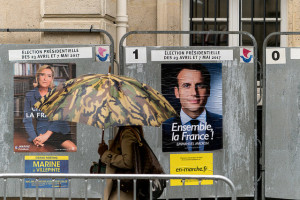 The centre has prevailed in France, having just elected moderate and pro-EU centrist, Emmanuel Macron, as president on May 7, 2017. In the second round of France’s presidential elections, Macron widely beat leader of the National Front (FN), Marine Le Pen, a far-right populist, by a margin of over 30 percentage points. His victory was expected by early polling, with projections predicting a Macron victory despite the rising popularity of Le Pen and the FN in France boosted by the 2015 Charlie Hebdo shooting and the November 2015 Paris attacks. The spike in Islamophobia that emerged in response was very much encouraged by Le Pen’s rhetoric, who promised to close France’s borders to Muslims immigrants. Le Pen’s 21.3% vote share in the first round, though substantial, was not enough to carry her through the runoff, a victory that would have represented a radical shift of power after decades of the centre alternating in power. The result of the French presidential election raises the question of what is next for France.

The implications of Macron’s victory are very much important in the scheme of France’s economic state. France’s economy has long been stagnant, plagued by large poverty and unemployment rates after the 2008 financial crisis. The national rate stood at 10% in 2016, the eighth highest out of the 28 EU member states. Over the course of her campaign, Le Pen’s platform of anti-globalization resonated with citizens in areas hit by deindustrialization. Le Pen’s strongholds were pockets in the North and South, those experiencing well over 10% unemployment. Her populist appeal and promise to revive the French economy fueled her support. Rhetoric about immigrants stealing French jobs and abusing France’s generous welfare state further inflated her popularity amongst such voters. Dissatisfaction can also be attributed to François Hollande’s business-friendly reforms, including his moves to give corporations greater power to increase working hours, reduce pay, and lay off workers.

Voters saw Emmanuel Macron’s credentials as a former investment banker and vision for France’s economy as a bold force of optimism for the nation’s future. His pro-EU, pro-globalization, and pro-business direction attracted working professionals concentrated in urban areas such as Paris and its affluent suburbs, where Macron won by a landslide. This election was largely a question about which candidate could revive jobs, reduce poverty, and allow the French economy to successfully compete on the European and international levels. Macron’s economic plan for gradual economic reform might be met with skepticism and criticism, as many critics argue that far bolder reforms are needed to revive the French economy. His pro-business and pro-EU orientation will surely alienate large swathes of the working-class – many of which voted for Le Pen – who push for protectionism and believe that France’s economic sovereignty is being undermined by EU bureaucrats and business interests. Many hold a legitimate fear that France’s economic course will remain on the exact same path as with previous centrist administrations, further pushing voters towards Le Pen. By failing to address these grievances and continuously moving towards the EU and globalization, Macron could be faced with social unrest, labour strikes, legislative opposition, and an even stronger challenge from Le Pen in five years.

Politically, Emmanuel Macon’s victory does not represent an end for Marine Le Pen and the FN in France; rather, it presents an opportunity to scrutinize the new administration and strengthen the FN’s legitimacy. This election cycle proved that Le Pen not only won the support of over 33% percent of French citizens but was also successful in capturing voters dissatisfied with the current state of politics in France. In her concession speech, Le Pen claimed a “historic, massive result” for her party, solidifying the FN’s role as the main opposition force. It is worthy to note that Le Pen also admitted that the FN needs to be “profoundly transformed,” an attempt to make her party and platform more palatable for voters. One of the most notable takeaways from the whole election cycle was that it redefined French politics in terms of what is next for France’s political future. Rather than a battle between centre-left and centre-right, French politics has turned into a struggle between pro- and anti-EU, pro- and anti-immigration, and globalization and protectionism. Voters were dissatisfied with what they viewed to be an elite circle of insiders making decisions behind closed doors, identified as the “establishment” of French politics. Through her populist appeal as champion of the French people, Le Pen criticized Macron, former Minister of Finance, as being one of these insiders who does not understand the grievances of ordinary French people.

Macron now faces one of his greatest challenges: addressing the grievances of those feeling alienated by the status quo. His Europhilic tendencies and position as a Parisian elite, however, only breed further disillusionment and distrust. Emmanuel Macron must show that he is working for the French people, not for Paris or Brussels, otherwise he faces an even stronger threat from Marine Le Pen and the FN. If she decides to run in 2022, Le Pen may no longer be at the fringe as a distant contender. Macron must also focus on mobilizing his newly founded party, En Marche! (“Onwards”) for the upcoming parliamentary elections in June, where 577 seats are in contention. With En Marche! currently occupying no seats, Macron faces a challenge of enacting his agenda, especially with no parliamentary majority and a growing bloc of radicals in the National Assembly. Finally, Macron must show a departure from François Hollande, his political mentor, who is ending his presidency with a dismal 4% approval rate. This is perhaps his most important challenge of all. France is desperate for change, and a continuation of Hollande’s policies will spell disaster for France’s political and economic future. Without economic reform, France will dive deeper into debt and unemployment, likely experiencing a loss in public confidence and triggering social unrest. A young, inexperienced politician, Macron will find it difficult to pave his own way without help from an inner circle of elites which much of France has vehemently rejected.

Leading up to the 2017 presidential election, two of the most divisive issues for France were, and continue to be, national security and immigration. Marine Le Pen and the FN’s popularity is attributed to her promise to stabilize French national security, starting from curbing Muslim immigration and implementing restrictive, Islamophobic laws. France has been a common target for Islamic State-inspired and -led attacks around the country, including the 2015 Charlie Hebdo shooting, the November 2015 Paris attacks, and the 2016 Bastille Day attack in Nice. The country remains extremely polarized about Muslim immigration and the future of Islam in France, especially as over 230 people have been killed in terrorist attacks within the country since 2015. Hundreds of young, disillusioned Muslims have travelled overseas to Iraq and Syria to fight for ISIS, and many have become radicalized by France’s military actions in the Middle East. Often living in poor ghettos in the suburbs of big cities, young Muslims are becoming more and more radicalized within their communities, fueled by propaganda and unemployment. Le Pen was swiftly and successfully able to tap into the mood of the French people and mobilize it into a campaign fueled by anger, hatred, and fear. She frequently criticized Hollande’s plea for unity in the face of terrorism as empty rhetoric and a danger to France’s security, instead proposing to halt Muslims immigration and cut welfare spending on immigrants. The FN has argued that France’s benefits , such as housing, school, employment, and welfare benefits, should exclusively go toward French nationals instead of “foreigners”.

France’s terrorist threat is a legitimate reality and fear of French citizens should not entirely be discounted as a xenophobic, nationalistic outcry targeted against Muslims. Rather, it is a reaction from fear and a concern for the collective safety of France and its citizens. Emmanuel Macron should address these concerns of French citizens. Number one should be combatting the recurring cycle of poverty and unemployment in Muslim communities around the country. Reforming education and employment is a necessary prerequisite that must be embraced by Macron to welcome alienated Muslims back into French society. This has the potential to curb the threat of homegrown terrorism and unite Muslims as a front in denouncing radicalism. By embracing moderate French Muslims to defeat extremism, Macron can better defend France against terrorism. Admission of refugees from war-torn Iraq and Syria and from destabilized regions of North Africa and the Middle East, while a humanitarian goal worthy of praise, will further push many French citizens towards Le Pen. Many French citizens will view their needs and grievances as being ignored in favour of outsiders. Voters will naturally gravitate towards Le Pen, a rejection of tolerance and multiculturalism in order preserve, what many view, to be a crumbling French national identity. A similar reality has occurred in other EU states such as Germany, where many critics of Chancellor Angela Merkel’s refugee policy have embraced a far right party, Alternative Für Deutschland. A careful balance between accepting refugees and addressing the security concerns of French citizens, is crucial for a Macron presidency. He cannot afford to alienate. Macron will likely continue accepting refugees into France and working with NATO allies to fight Islamic extremism across the globe, continuing NATO cooperation pursued by previous administrations. However, if France is hit by a terrible, destabilizing attack on its borders, an inexperienced Macron will be placed in a tough position by having to deal with its ramifications – a challenge that could further push voters towards Le Pen, as he is left to clean up the mess. A terrorist attack could fundamentally change France’s social and political reality, triggering a move towards the far right that could culminate in a complete shutdown of Muslim immigration, restrictions on the civil liberties of Muslim citizens, and an increasingly isolationist orientation.

What is next for France remains unforeseeable. However, it remains an interesting and important question to ponder as Macron takes office. As shown by results, a vast majority of France chose to stick to the centre, extending their support to a candidate that is unlikely to change the direction France is moving in. Perhaps they were not yet ready to embrace the radical change in course promoted by Marine Le Pen and the FN. Macron’s administration for the next five years will not just have an immediate effect on France’s political, economic, and national security state but will also have a pivotal effect on paving the future of France as we know it. Economically, it is vital that Macron address the concerns of the working poor hit by deindustrialization in the periphery of France, a bloc whose grievances have been greatly exposed with recent waves of populism. Most importantly, Macron must ensure French citizens that he will protect them by fighting Islamic extremism and home-grown radicalization, balancing humanitarian priorities with strong national security measures. A continuation of France’s current path may lead to a Le Pen presidency in 2022, which would undoubtedly change France’s current position, as it likely abandons many aspects of liberal democracy, multiculturalism, and openness. This time, France chose not to be hostage to fear and emotion. This time, France chose common sense. Who knows what it will do next time it is left with a choice.