By Victoria Emanuelle Forest-Briand On Nov 13, 2017 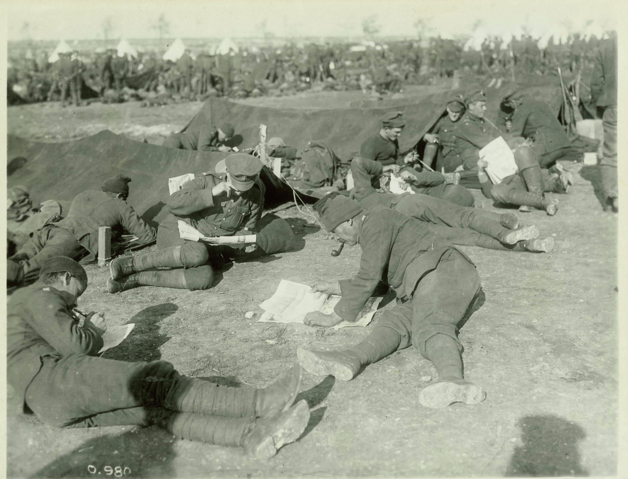 This past Saturday, we honoured our fallen heroes and the service of the men and women who protected our freedom. A hundred years have passed since the Battle of Passchendale (October-November 1917). Canadian victory over this battle left a toll of 15,654 dead and wounded.

During a research project I did over the summer, I stumbled upon a few letters from soldiers that were written in 1917 during World War I. The brave servicemen penned the missive to be read by their loved ones. The letters reveal the timeless truths of war. One soldier recounts his perils in fighting the Fritz and the harshness of the war. Another asks his mother to send him mittens as the temperature in France drops. Although he is now placed in the bombing section of his platoon, he begs his mother to stop worrying about him. A superintendent praises the virtues of his fellow comrade. Lastly, one soldier writes to thank the ladies of St. Stephen for the chocolates he received in the parcels. They brought immense joy to his heart.

Although a century has passed since these letters were written, their genuine emotions remain timeless. By honouring and sharing their stories, we commemorate their services and sacrifices.

Well Mother, I’m still alive. I guess I am a little late in writing this time, but we have never got settled since we came out of the [?] the last trip, and I did not get a chance to write. But if you don’t get letters regularly, why don’t worry, for its pretty hard to get paper here sometimes, for we won’t carry it around, so we just have to take chances on hitting a Y.M.C.A.

I am in the bombing section of our platoon, so I expect I will have a chance to do a little damage. We carry rifles too, so you see we are well armed. They call the bombers the “Suicide Club”, but I don’t know if it is much worse than anything else.

We had a pretty rotten trip in the rain this time. It rained all the time, so of course I got little cold, but it is getting better now. I had socks enough to change every morning, and that was a big thing.

We had a wiring party out one night and it was one of a party of three to go out in front of them and over them. We were about half-way over to Fritzie’s front line, lying flat on our stomachs in the grass. We were out three hours, and I think it rained most of the time. But we have our rubber sheets so we didn’t get very wet, but it was pretty cold. We didn’t get a chance to move around to keep warm, just had to keep as still as a mouse and watch all the time.

Just at present we are billeted in a barn, about thirty-five of us. There’s lots of straw and it’s o.k. as long as it doesn’t rain, but when it rains we sure do get the full of it benefits, for the roof is full of holes. All the buildings here have thatched roofs, and most of them are as old as the hills, so they are pretty well worn out.

I have met a lot of boys out there that I know. Some of them have been there for two years and never had a scratch. Clyde Bamford is in this battalion, but not in the same company. I see him pretty often. He is a runner or something. I guess he has a pretty good job. Cosseboom from the Ledge is here. He is Corporal of the battalion scouts. I haven’t had the chance to speak to him yet, just saw him on parade one day.

Well Mother you asked me if there was anything I wanted. I guess anything you send me will be welcome.

We have no mittens yet, so if you could send me some, they would come in handy. Knit them with one finger, so we can shoot the Fritzie with them. But anything you send me will be fine some eats go good over here too. I was wishing for a piece of lemon pie the other day, but of course that is out of the question. I got the Courier, so you can send them right along. Mr. Buchanan, our platoon officer, is all to the good. He sure is a good scout. The boys can’t say enough for him. He sure look after his men. It’s too bad that there aren’t more officers like him. I think it would be a better army than it is.

I got your parcel on Saturday and it was quite a treat I can tell you. I don’t know, but I don’t think I enjoyed anything more in my life. It sure went to the right spot. It is pretty nice to find a parcel waiting for you when you get back from the line.

I suppose you people are doing some ill worrying, but you don’t need to, because it don’t do any good, and if I am wounded, why you’ll know about it it pretty nearly as soon as I do, anyway. I have got a date on to the eve of Christmas dinner in England.

Well, Mother, I must ring off for its time to get rations,

We were put under segregation for ten days and that was hard on us, as we were not allowed outside of the bounds of our tents. I got all I wanted of guard duty. I thought of home and the food more than once. The meals were small, although we got a good one once in awhile.

When the ten days were up and we were allowed outside it did not seem so bad. About a week ago we were moved into the huts across the roads. It is much better. We have a stove and electric lights, if you furnish the bulbs.

We did not have much drill, but work. We were building roads, cutting down bushes with pick-axes (true) and such work. Last Monday, I got in a draft in the 128th, leaving for Scotland. I couldn’t get to France, as you have to go where they send you.

And I am taking the liberty to write to you and to let you know what a great help and blessing Ern has been to me in my work here as superintendent of the above hall. Indeed at times I do not know what I should do without him. He has been with me practically every night of the week since nearly twelve months ago, and as I say I appreciate most highly his assistance. He has recently told me that he came to me that he might be kept straight and believe me he has not only been doing this and keeping true to his God and yours, but he has been quite a helper of others to my experience and knowledge.

I will tell you of one case which should cheer your hearts. A man who had great difficulty upon the drink question and could not seem to master his failing, came to Canada Hall and I believe over the counter made Ern’s acquaintance and confessed his weakness. Ern quietly took him in hand and brought him night after night to the hall with the happy result that that man is living a sober and straight life. If that were all that your son did in this great tragedy of war, he has won his Heavenly Father’s smile, but I know of others who have been influenced for good through his stability of character, and I am bound to confess that it has again and again been an inspiration to myself.

He has just spent a few days at my home and Mrs. Marlow has just written to say how much she enjoyed this company and the gentlemanly way he conducted himself.

Permit me to say, Mr. and Mrs. Davis, you have a son to be proud of, a manly man and one of God’s gentlemen. I have never known him to do a mean act. I’ve heard him regret such things when displayed by others and personally I am thankful that I ever came in contact with him.

I don’t know whether he has sent you a photo of himself and me, but if not I expect he will do so shortly.

Trusting you are both in good health.

To the Young Ladies’ auxiliary of the Union Street of Baptist Church, St.  Stephen:

I wish to thank you very much for the splendid parcel which I received from you today and to assure you that the contents were very much appreciated. Such things as Ganong’s chocolates are almost unknown in this part of the world except what are sent to us from Canada, and I have enjoyed them more than anything I have eaten for some time, I spared a few treats for some of the boys who were not so fortunate, but you may be sure that I kept the lion’s share for myself. I send my sincere thanks to you all, especially Mrs. Frank Littlefield, and would like to be remembered to all the people I know in St. Stephen.

I hope it may not be very much longer until this war is ended and we may all be back again in Canada.

Wishing you one and all a Merry Christmas and a Happy New Year,

I remain sincerely yours,

The service and sacrifice of the Canadians who fought there will never be forgotten. May we remember Wilfrid A. Boyd, Fred H. Graham and F.B. Watt.

Victoria Emanuelle Forest-Briand is a French-speaking undergraduate student of Political Science and International Development Studies. Her research interests are Canadian history and politics and human rights studies with a special interest in Indigenous Studies.