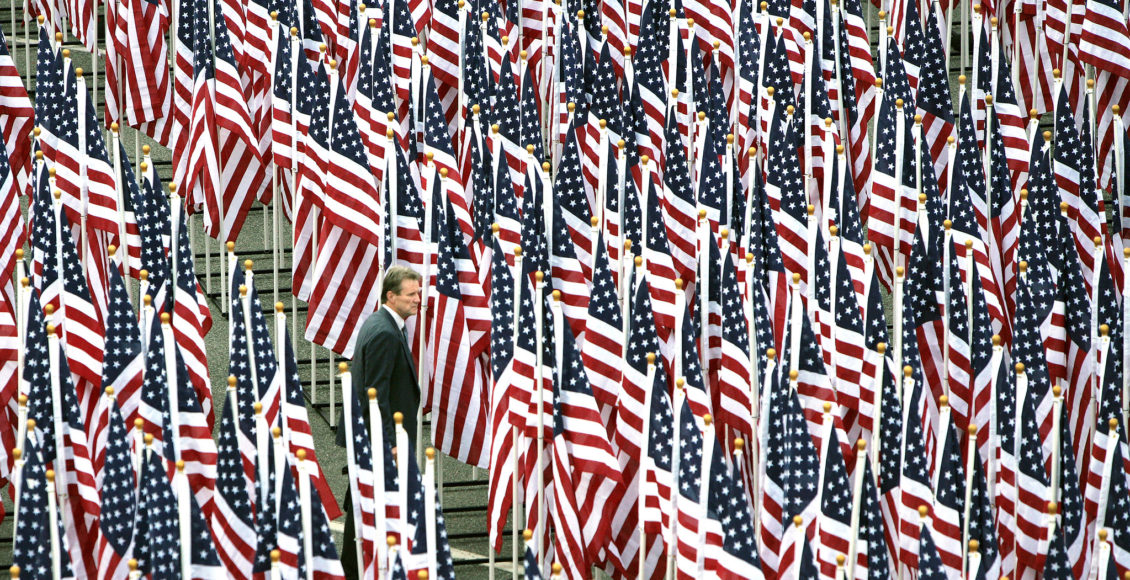 WASHINGTON  A man walks through the Healing Field flag display near the Pentagon Memorial prior to the dedication ceremony Sept. 11. The flag display was sponsored by the nonprofit Healing Field Foundation. Each flag represents someone who lost their lives on Sept. 11, 2001. Photo by Lance Cpl. Bryan Carfrey
Share
Advertisement

The United States Congress recently near-unanimously approved Bill S.2040, or more commonly, The Justice Against Sponsors of Terrorism Act (JASTA). It overrides what is known as sovereign immunity in allowing United States citizens to sue foreign governments for their involvement in terrorist activities. Families of the 9/11 victims now have the green light to pursue legal action against the Saudi Arabian government, who are alleged to have known about and bankrolled the 9/11 attackers and Al-Qaeda. JASTA has ten Republican and nine Democratic party cosponsors exemplifying significant bipartisan cooperation, with Sen. Bernie Sanders and Presidential Candidate Hillary Clinton also voicing support for the bill.

The Senate was the first congressional chamber to unanimously pass the bill on May 17th, 2016 while rumors were still circulating about what is called “The 28 Pages” apparently proving Riyadh’s involvement in the September 11 attacks. During the following summer “The Joint Inquiry into Intelligence Community Activities Before and After the Terrorist Attacks of September 11” was released. The 28 pages investigated and determined possible links between the terrorists behind 9/11, the Saudi Arabian government, and Al-Qaeda. Fifteen of the nineteen assailants were of Saudi descent and affiliated with Al-Qaeda, mysterious financial transactions to Saudi expatriates and to fundamentalist charitable organizations concerned investigators. However the inquiry did not have enough information to directly link the Saudi government to the 9/11 attacks, meaning the 28 pages do not confirm the Saudi Arabian government’s involvement.

Notable naysayers include President Obama, Senate Armed Service Committee Chairman Sen. John McCain, the European Union, and several companies such as General Electric and Dow Chemical Company. Both politicians cited concerns of losing their sole ally in the Middle East as well as the capacity of other countries to draft similar legislation to then sue the United States government for war-time offenses (an important note is that the United States has not officially declared war since World War II, but its preemptive and reactionary campaigns in the Middle East during the Bush administration and beyond have been coined the United States’ “War on Terror”). Despite these concerns, President Obama’s veto was swiftly overridden by both chambers of Congress on September 28, 2016. Meaning, Bill S.2040 is now law.

Before making any snap judgments on the law, it is important to look at statistics. Three thousand lives were lost in the September 11 attacks. The fall of the twin towers and attack on the Pentagon sent a massive ripple effect throughout the country, devastating families, striking fear into the hearts of millions, and sending a very clear message: terrorism is a credible threat to the United States. Following the attacks, President George W. Bush’s administration retaliated by invading Afghanistan in 2001 and Iraq in 2003 as well as sending air strikes into Pakistan and Yemen in 2002.  The US legitimized it’s invasion of Iraq by claiming the invasion was aimed at eradicating terrorism and preventing Iraq, the supposed state perpetrators of 9/11, from developing nuclear weapons. The latter claim was later proved false, leaving a blood-stained mark on the Bush administration’s legacy. Despite spending trillions of dollars on the ‘War on Terror’, Al-Qaeda and the Taliban are as strong as ever.

Since March 2015, fourteen years after the September 11 attacks and four presidential election cycles, “Approximately 210,000 Afghan, Iraqi, and Pakistani civilians have died violent deaths as a direct result of the wars [War in Afghanistan and Iraq War] “. It is estimated between 30,000 and 45,000 Afghans died between 2001 and 2011, as many as 14,600 were civilians. The Iraq war has resulted in an estimated 170,000 casualties between 2003 and 2011. Between 2004 and 2014, over 14,000 people in Pakistan were killed by US air-strikes targeting the Taliban. The US presence in Afghanistan was its strongest in 2011, under the Obama administration, with approximately one hundred thousand American soldiers on the ground.  If you were to include military personnel, security guards, aid workers, and journalists, the toll would be much higher. You would have to imitate the 9/11 attacks seventy times, or attacks with a death toll of at least three thousand civilians, five times a year, for fifteen years, to have the equivalent scale of death and violence against civilians in the United States as has been imposed in the Middle East.

The 28 pages leaves quite a few questions unanswered. Namely, did the Saudi government even know about the attacks prior to September 11th, 2001? Are they legitimate allies of the United States? Is Saudi Arabia a state sponsor of terrorism? As it stands, however, the Joint Investigation has no definitive proof as to whom within the Saudi Kingdom was involved and in what capacity. One hundred thousand soldiers in Afghanistan were affiliated with the United States government who wrongly invaded the country. There is definitive proof that the Bush administration lied about the WMDs. The countries, while unstable to begin with, were completely destabilized, leading Afghanistan to collapse into a failed state, to a rise in extremism, and to what can be argued a vacuum filled by the Islamic State. One does not have to support the Saudi Arabian monarchy to see the flaws in overstepping sovereign immunity and the United States’ vulnerability to parallel legislation.