A Change Has Come: How Student Activism is Changing the National Narrative 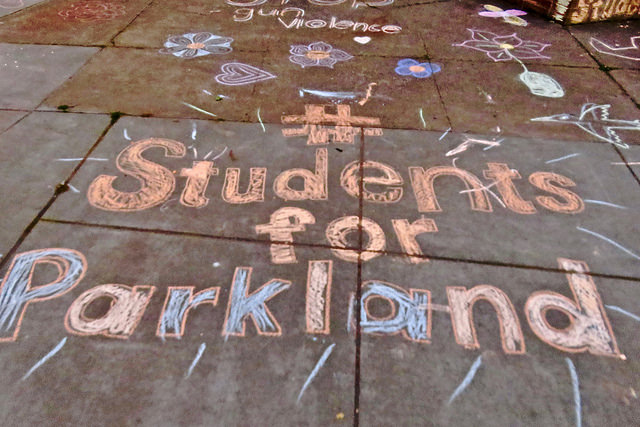 Once again, the United States finds itself in a moment of crisis as the nation struggles to reorient itself following yet another school shooting, this time in Parkland, Florida. Parkland marked the 30th mass shooting of 2018, which is telling seeing as it is only the third month of the year. While each shooting is defined by a unique sense of pain and tragedy amongst victims and observers alike, there is no doubt that the nation has become desensitized to these tragic shootings given their frequency in recent years. Consequently, the nation has developed a systematic, verging on apathetic, response to these gun-related tragedies that is best reflected in the formulaic reaction of the nation’s media outlets. In the days following the initial reports of a tragedy like that of Parkland, media coverage rapidly cycles through four phases, each with a distinct focus: the specifics of the event, the victims and their individual stories, a detailed analysis of the perpetrator, which will inevitably lead to discussions of mental health, and widespread and unresolved debates on gun control. Despite charged rhetoric, emotional outcries, and dramatic pleas from victims and bystanders alike – all of whom have become so frequent to have lost their power – the issue inevitably fades from headlines within a week until the cycle resets with the next gun-related tragedy, which at this point seems to be a question of when not if.

The students of Parkland, however, are breaking this cycle and reshaping the national narrative on gun tragedies within school settings, refusing to let their experiences become another statistic. Days following the events of Parkland, students took to the streets, so to speak, with social media campaigns (#NeverAgain), passionate interviews, and nationally televised debates with the nation’s political leaders, such as Republican Senator Marco Rubio and NRA spokeswoman Dana Loesch. Drawing both national and international attention with their poignant actions, the students of Parkland are confronting the nation’s leaders on their repeated inaction towards gun control despite the growing epidemic. Their response marks a decisive shift to that of previous tragedies, as frustration — not grief — has become the primary response amongst the victims. While the students of Parkland have received an outpour of support at both the national and international level, they have also received an onslaught of criticism for their “insensitivity” and their “politicization” of the tragic events of Parkland. It cannot be forgotten, however, that these students were the victims themselves.

Up until this point, the narrative of tragedy in relation to gun violence has been dominated by citizens distantly removed from the epicentre of these tragedies, debating the issues through general pretences of student safety, second amendment rights and mental health. The actions of these Parkland students, however, represent a mobilization of victims who are breaking their passive silence and taking action. On March 14th 2018, the Parkland students organized a national walkout that encouraged secondary students, as well as students from other levels, to leave their classrooms for 17 minutes to honor the 17 victims of Parkland, as well as to protest the increasing insecurity within educational institutions. Ten days later, on March 24th, students from around the country will take to the streets in the national “March for Our Lives”,  where students will “demand our lives be protected” and ask their leaders “what they are doing to protect us [students]”.

Transcending the circumstances of Parkland, this recent mobilization coincides with a larger growth in student activism in the last 10 years at both the national and international level.  The United States, in particular, has witnessed a dramatic rise in student mobilization at the post-secondary level that has solidified the presence of a national movement created by and for students. In contrast to other movements, the student movement is situated at a unique intersection where complex and bipartisan platforms, while not altogether irrelevant, do not define the movement. Instead, their actions are governed by specific yet large-reaching goals that create a sharp dialectics between the students and the institutions that govern them. This localized and decisive focus, which is an essential element of Social Movement Theory, has not only garnered widespread support from students-allowing for relatively rapid mobilization-but other sectors of society as well.

The efforts of Parkland effort stand out in the U.S. due to their manifestation at the secondary as opposed to the post-secondary level. Many other countries, however, can trace the roots of their national student movements to the secondary level, as seen in Chile’s 2006 Penguino revoloución when secondary students took the street for educational reform. These protests ultimately set the stage for the 2011 post-secondary protests regarding the growing economic disparity affecting educational accessibility. In the United States, student protests have highlighted similar economic tensions with the added element of racial disparity. Following a series of successful demonstrations at the post-secondary level, such as the resignation of the University of Missouri’s president following unaddressed concerns of racial discrimination, and Princeton and Yale’s elimination of the administrative title of master, both the mobilization and likelihood of participation amongst students has risen dramatically. A recent study published by UCLA found that 1 in every 10 incoming freshmen are likely to participate in protests – the highest this ratio has been in 50 years. This number is higher among Black students.

While post-secondary protests tend to deal with localized concerns within the context of their institutions, which are often reflective of larger political trends, the Parkland movement is a highly inclusive national movement that has students and civilians alike rallying behind the basic idea of protecting students’ lives.  While the movement itself is benefiting off a growing momentum in the U.S. amongst frustrated citizens, the velocity of its emergence is none the less noteworthy, as the students have done more in a month than national leaders have done in years. Using the charged emotions surrounding gun violence, students have created a sharp dialectic between the victims of this violence, of whom are not limited to students, and lawmakers who are charged with the protection of these victims.  While student-oriented, the movement itself an intergenerational one, as a majority U.S. citizen of all ages support stricter gun control in some manner. Students have been able to capitalize on national frustrations with politicians who have continually refused to act following a tragedy due to fears of losing support from key financial donors, most notably that of the NRA.

Moving beyond the student movement, Parkland’s efforts also reflect the recent grassroots movements that have taken seed at the national level. From the socialist-driven political campaign of Bernie Sanders to national marches in support of the sciences and female rights, the U.S, along with many other countries, has seen a dramatic rise in citizen mobilization that has not occurred to this extent since the 1960s. While this mobilization correlates to rising trends of international mobilization, the U.S. is one of the few developed nations facing such high levels of discontent. The prevalence of participation is arguably the most astounding aspect, as younger citizens are more likely to engage in political mobilizations as opposed to institutional channels, such as voting. Millennials consistently have the lowest turnout rates in federal, state and local elections.

This recent rise in mobilization warrants reflections on the concept of the crowd and crowd theory more generally. The crowd, as a means of collective action, has not had a significant role in the Western hemisphere as a whole since the interwar period and the rise of fascism. While the concept of the crowd has various connotations and definitions depending on the context, the last ten years have been marked by a resurgence and development of the crowd in the contemporary era. The digital age, through its plethora of platforms for speakers, has added an additional level to the crowd, creating an invisible crowd behind the screen. The physical manifestation of the crowd, however, has also seen a resurgence.  While crowds are typically viewed as manipulatable forces that pose a direct threat to a society’s sense of order, and thus viewed as inherently negative, in the recent years, crowds have been framed as a source of individual action, framing them as means of connecting like-minded individuals and giving them a voice through collective solidarity, much like that of the Civil Rights Movement in the 1960s.

As the movement grows, U.S. intuitions, in particular, are finding themselves increasingly ill-equipped to handle these protests, which Parkland seems to demonstrate. Institutions and businesses alike have no choice but to undertake changes due to the physical mobilization of citizens. While these actions have yet to reach many of the nation’s major government institutions, the shift in various political stances as well as the policies of several major cooperate retailer’s, such as Dick’s Sporting Goods, Walmart and Kroger who have increased the age for gun sales, that have emerged following Parkland are telling signs. Despite the various factors that have contributed to the success of these mobilizations, the most relevant consideration for the nation as a whole is that U.S. citizens clearly feel a higher sense of political efficacy through non-institutional measures that directly confront the foundational integrity of the state, which will no doubt influence the nation’s political future.