A Curious Coalition in Iceland 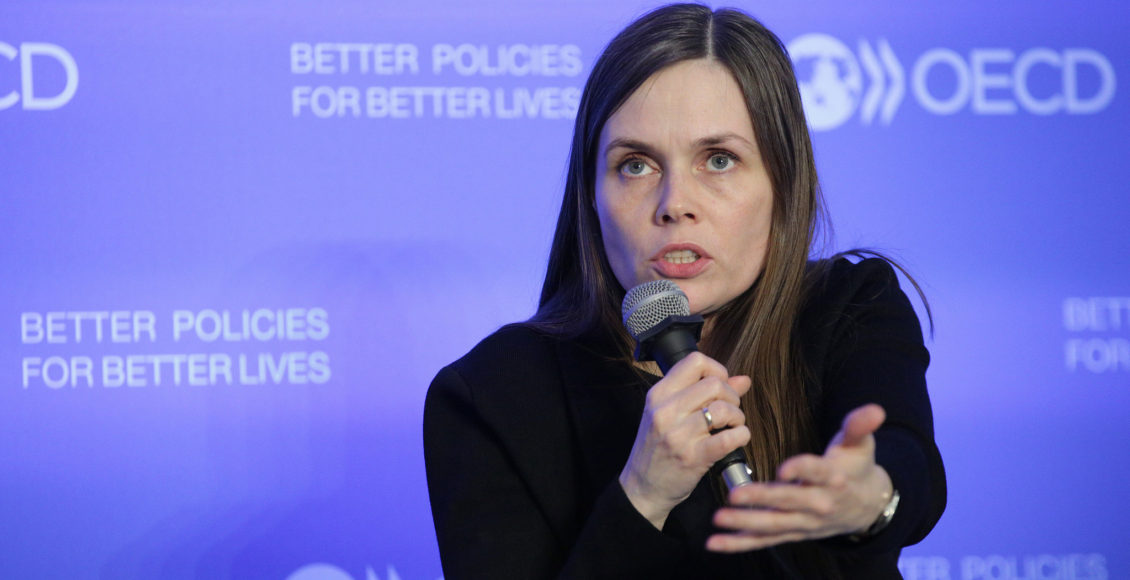 The notion of a grand coalition of center-left and center-right is not a particularly far-fetched one. After a decently long crisis this February, the center-left German Social Democrats agreed to extend their coalition with the center-right Christian Democratic Union, led by Chancellor Angela Merkel. In Austria, a grand coalition between the conservative Austrian People’s Party and the Social Democratic Party lasted from 2006 until 2017.

Especially in post-World War II Europe, where left and right have historically been defined by and parties with a shared commitment to a social welfare-focused economy, this type of coalition sense. With the decline of social democracy across most of the continent, from the Netherlands to Italy to Austria, this kind of grand coalition becomes less tenable. Nonetheless, parliamentary systems with fragmented party structures often require some kind of coalition, and this is how seemingly strange left-wing/right-wing coalition politics emerge.

While left-wing/right-wing coalitions can hold promise in tackling some of the problems of globalization, these coalitions can quickly sink under the populist pull and face their contradictions at the polls.

Greece and Iceland present two of the best examples of strange bedfellows in government. Greece’s government has been made up of left-wing SYRIZA and nationalist right-wing Independent Greeks (ANEL) since January 2015. On the outer reaches of Europe, Iceland’s government, formed after the 2017 election, consists of the leftist, feminist, environmentalist outfit Left-Green Movement, the Euroskeptic conservative Independence Party, and the agrarian conservative P Party.

Greece remains an interesting case to study in light of both parties’ opposition to neoliberal austerity programs forced by the “troika”, a set of international financial institutions who manage the euro’s bailout fund. However, the coalition’s composition, composed of 145 SYRIZA members and just 7 ANEL members, skews heavily left-wing. Therefore, Greece’s government does not represent a balanced coalition where the cross-pressures and contradictions of “wings” in the coalition government are as evident.

Iceland’s 2017 election ended with a fragmented party scene in which no party was close to a majority. Parliament’s 63 seats were divided between the Independence Party (16 seats), the Left-Green Movement (11 seats), the Progressive Party (8 seats), the Social Democrats (7 seats), the Centre Party (7 seats), the Pirate Party (6 seats), the People’s Party (4 seats), and the Reform Party (4 seats). Importantly, the two largest parties won only 27 of 63 seats. These results necessitated a coalition government. Initially, Left-Green party leader Katrín Jakobsdóttir attempted and failed to bring together the center-left Social Democratic Alliance, the anti-establishment Pirate Party, and the center-right agrarian Progressive Party. After this left-leaning (minus the Progressives) coalition plan fell through, the Left-Green Party turned to two unconventional potential partners—the Euroskeptic conservative Independence Party along with the agrarian conservative Progressive Party, Iceland’s two historic governing parties.

Historically, the Progressive Party has been an agrarian classical liberal party in the mold of other Scandinavian parties like the Center parties of Sweden, Norway, and Finland, and the Danish Venstre. Their position in the system is flexible, allowing them to forge various coalitions. Thus, their participation is decidedly less surprising than that of the Independence Party. However, the Progressives have become more nationalist in recent years, provoking some political scientists to classify them as populist conservative, even as they retain a decentralist approach to policy.

The Independence Party is classified by most observers as “liberal conservative” and “Euroskeptic”. Its main goals are lowering taxes and severing ties with Europe. Before the recent elections, it governed alongside technocratic liberal Bright Future and Reform. However, a scandal involving a pardon for a child molester brought down the government when Bright Future felt like they were not informed of the situation by Independence Party leaders. Thus, the Independence Party emerged from the elections as the largest party, but one dragged down by scandal.

The Left-Green Movement stands for democratic socialism, eco-socialism, and feminism. They want to protect the environment and raise taxes, which may seem to contradict their partners’ goals. Compounding the strangeness of this arrangement is the fact that the Left-Green movement isn’t even the largest party in government, but leads the coalition thanks to their leader’s popularity, a relative rarity. PM Katrín Jakobsdóttir appointed as environment minister the head of the country’s most prominent conservationist NGO and plans to create a carbon-free Iceland within the next 20 years, making her a supposed antidote to President Donald Trump and a hero revered by the online left. However, despite international observers calling her the antidote to populism, PM Jakobsdóttir employs quasi-populist rhetoric. She consistently refers to the crisis of trust plaguing Icelandic politics after numerous scandals in previous governments and calls for changing the system.

Unlike in Greece, this coalition has resulted in outcomes both on the left and on the right, likely because the numerical balance of power in Iceland still rests with center-right and conservative parties, despite the government being headed by a leftist. In Greece, as noted, a small number of right-wing nationalists prop up a much larger SYRIZA contingent in Parliament.

The coalition’s glue comes from the parties’ common stance towards European integration and globalization more broadly. Both the Progressive Party and Independence Party have a longstanding decentralist bent that manifests itself in anti-EU sentiment. Unlike other left-leaning outfits, the Left-Green Movement vocally opposes European integration, meaning that one of its main priorities matches that of its otherwise divergent coalition partners. In a late October interview, PM Jakobsdóttir rejected the idea of Iceland joining the EU, citing the Eurozone’s failures, and denounced Iceland’s current NATO membership, blending the government’s shared Euroscepticism with her own party’s leftist anti-militarism.

This nationalist flavour has indeed permeated the coalition’s policy agenda. Iceland recently has attracted a high degree of interest from foreign investors buying up rural land. However, many farmers decry the practice,  seen as unfair to local residents. The government is now looking into strengthening regulations governing foreign land purchases in order to protect local ownership and keep out foreign interests. In fact, PM Jakobsdóttir recently stated, “First and foremost I want to defend the nation’s sovereignty”, a phrase prevalent among both the populist left-wing and the populist right-wing. This sort of stance is bolstered by the nationalist positioning of all three governing parties, showing how consensus can arise even across a clear left-right divide.

In another example, Minister of Tourism Þórdís Kolbrún R. Gylfadóttir recently called for limits on how many tourists can visit certain sites. This may sound ironic, because tourism has brought much prosperity to Iceland, accounting for nearly 10% of GDP. However, issues like overcrowding and infrastructure degradation have caused strain on Icelandic society. Now, the government, guided by shared sentiment, seeks to shield itself from the negative impacts of being a hub on the global tourism market.

Beyond this isolationist approach are aspects of populist right posturing. For example, Iceland’s official July 18th independence day celebration was headlined by the controversial Pia Kjærsgaard, a Danish right-wing politician with a history of anti-Islam statements. Despite the government being led by a supposedly left-wing leader, Kjærsgaard was later invited by the government to speak to parliament, showing some level of ambiguity towards right-wing populists.

Similarly, right-wing symbolism has taken root within Icelandic politics. Recently, members from four political parties introduced a bill to ban ritual circumcision, an element of both the Jewish and Muslim faiths. While receiving support from 1/3rd of Icelandic doctors, the proposal rankled Muslim and Jewish communities who saw anti-religious sentiment behind the bill, which targets a practice that has only occurred 21 times since 2006. Instead of addressing a legitimate concern, this represents more of a prejudiced symbolic measure meant to target practices carried out by non-Christian religions. Seemingly scrapped in spring 2018, the bill is, in fact, still being worked on in parliament. The Left-Green-led government perhaps faces pressure from their right-leaning partners on this issue. The government’s ambivalence here indicates a conflicted position, one which perhaps shows how the Left-Green Movement can likely not emerge from this coalition without right-wing influence affecting their policies.

That said, this strange coalition has also resulted in progressive outcomes in some areas. Iceland recently became the first country in the world to ban paying men and women different salaries for the same job. PM Jakobsdóttir notes that this step reflects a long Icelandic tradition of wielding government power to legislate equality. Legislating pay equality seems like a decidedly left-leaning step, but perhaps it reflects a longer term cultural trend. After all, per the PM, 80% of women are in the workforce, which also outpaces most of the world. Thus, Iceland’s right-left coalition, unique in its leadership, remains progressive in some regards.

Iceland exemplifies both the potential upsides and difficulties of bridging the populist left and elements of the centre and right. On one hand, the Left-Green Movement was able to transcend traditional divisions with a common isolationist-nationalist outlook and forge a surprising coalition. This coalition has proven to be progressive at times and responsive to global pressures straining Iceland. However, PM Jakobsdóttir has also felt the influence of her right-leaning coalition partners, remaining silent on some populist right issues and kowtowing somewhat on others. This has created the ultimate challenge for her government’s long-term persistence. The Left-Green Movement is now polling at an underwhelming 10.7%, less than half of their 2017 election performance. While PM Jakobsdóttir seems to have made this arrangement work thus far, if her slim coalition melts thanks to her party’s collapse, Iceland’s curious arrangement will die an ungraceful death, imperiling prospects for future left-wing/right-wing coalitions.