A Delicate Balancing Act at the Heart of Central Asia

Kazakhstan cannot achieve its foreign policy goals without strong ties to Moscow, Beijing and Washington. Yet, protecting these relationships, adversarial to one another, is no easy task. 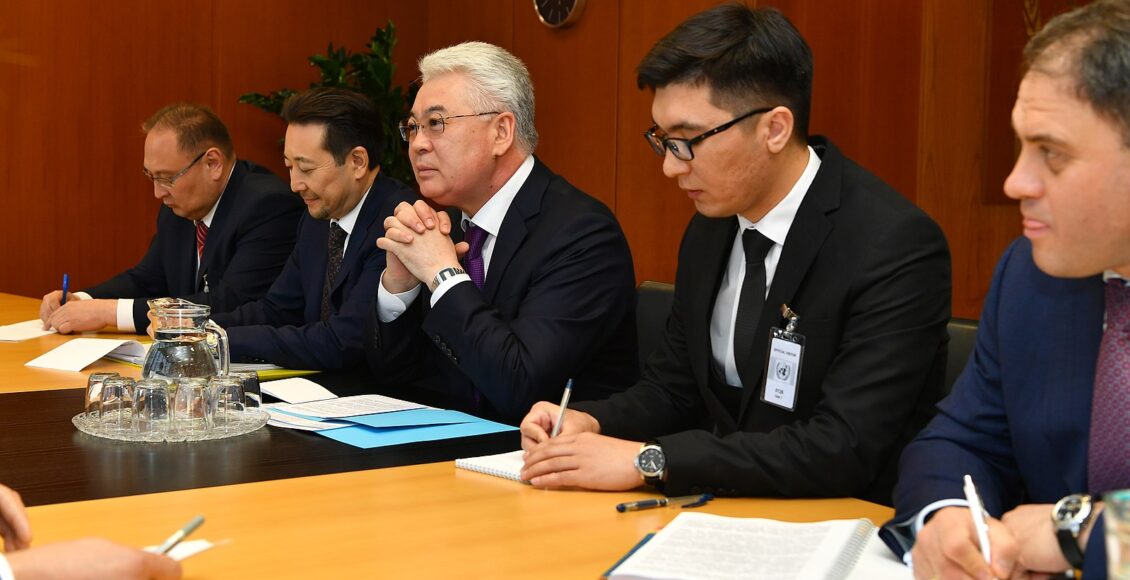 Kazakhstan’s foreign policy is the result of a careful balancing act. As in the cases of other former Soviet states, the dissolution of the USSR posed a challenging dilemma: how to integrate with advanced European and North American economies without severing ties with Russia, on which Kazakhstan relies for military support. Its foreign policy approach is a unique one, seeking to placate the many competing forces in Central Asia in the hopes of benefitting from each of them. To reflect the complex nature of the country’s foreign policy strategy, the term “multi-vector foreign policy” was coined, alluding to Kazakhstan’s choice of dealing with Washington, Moscow and Beijing simultaneously, and without alienating any one of them.

Each of these three vectors — the US, Russia, and China — serves Nur-Sultan’s ultimate goals of protecting its territorial sovereignty and “securing the status of a leading state in the region” in its own way. Indeed, significant Chinese investment is integral to keeping the Kazakh economy afloat. Without a working relationship with the US, Kazakhstan may be unable to improve its standing in transnational bodies like the UN and the North Atlantic Cooperation Council. The Kazakh and Russian governments collaborate on many national security issues, including the training of military troops, and Kazakhstan is a member of the Russia-led Collective Security Treaty Organization (CSTO). In order to fully understand the nuances of Kazakh foreign policy, it is therefore necessary to untangle its relationship with each of these powers.

A key goal of Kazakh foreign policy, expanding the country’s influence in Central Asia, requires the absence of Russian regional hegemony. Thus, it is imperative that Kazakhstan maintains a strong relationship with the United States. Without the support of other global powers, Kazakhstan would only be able to do very little should Moscow decide to more aggressively assert its influence in the region, as it has done previously in Georgia and Ukraine. As such, Kazakhstan has sought a constructive relationship with Washington since gaining independence. Bilateral agreements emerged with the removal of nuclear weapons in the 1990s, and since then the two governments have also signed non-proliferation treaties and cooperated on military exercises in Central Asia. Beyond national security, the US-Kazakhstan Energy Partnership was signed in 2001 with the aim of helping Kazakhstan integrate renewable energy into its economy. Despite such close diplomatic relations, both citizens and government elites are suspicious of intrusive American influence. Kazakhs have been observing the escalation of tensions between Washington and Beijing in recent years, fearing that increased American presence could jeopardize the inflow of Chinese investment that is so crucial to Kazakh economic growth.

Encouraging Chinese investment in Kazakh infrastructure is another central aspect of Kazakhstan’s multi-vector approach. Kazakh authorities deeply respect President Xi’s brand of authoritarianism and look to it as a “reference point” for their own government. Kazakh economists worry about their country’s reliance on raw materials and see an influx of Chinese business and technology as essential to avoiding over-specialisation. In the words of former President Nursultan Nazarbayev, China’s Belt and Road Initiative has “built roads, airports and harbours which have brought great changes to [my] country.” Yet, Chinese presence remains a contentious topic domestically. While wealthy elites have felt the benefits of recent economic growth, this has yet to trickle down to ordinary citizens. The oligarchs who own the country’s oil and natural gas companies, many of whom are also involved in government, embrace the access to new markets afforded by Chinese infrastructure and transportation investments. In the eyes of Kazakh citizens, this is seen as a blurring of the lines between public and private interests in a country already struggling with government corruption, as shown by its poor rating on Transparency International’s Corruption Perceptions Index.

Most recently, these frustrations boiled into a wave of anti-Beijing protests in September 2020. The list of expressed grievances is long: Chinese immigrants “stealing” Kazakh jobs, Chinese businesses polluting heavily, and the persecution of Kazakhs living in China’s Xinjiang region, all of which are deliberately ignored by Nur-Sultan in exchange for bribes, are just a few examples. These protests resulted in a thorough censorship campaign that saw activists jailed in a concerted effort to appease Beijing. In short, Kazakhstan cannot afford to lose China’s support. It seems that, although many worry about the country’s dependence on China, its elites are still willing to bandwagon onto the adjacent power.

No longer the region’s rising power, Moscow’s influence on Kazakh foreign policy is not what it used to be. Even so, Russo-Kazakh cultural ties remain strong. Kazakhstan still relies on its northern neighbour, with which it has negotiated several important diplomatic and economic agreements since independence. In 2011, in an effort to decrease the isolation of ethnic Russians living in Kazakhstan, a customs union was formed with Russia and Belarus. Shortly after, those same countries joined the Eurasian Economic Union, creating a single market that may one day lead to a common currency. Trade with Russia is critically important for the Kazakh economy —  nearly 40 per cent of imports come from Russia and most of Kazakhstan’s exports also transit through the country. Unlike in other former Soviet states like Ukraine, a close connection to Russia is seen as widely favourable by the population. According to recent estimates, 74 per cent of Kazakhs are satisfied with the current level of Russian influence or desire even more. Above all economic and cultural ties, the most important foreign policy bond Russia and Kazakhstan share is a military one; their military defence pact is a powerful diplomatic tool.

However, despite the apparent strength of these connections, Kazakhstan’s chief foreign policy aim is to increase and maintain its sovereignty and influence. This transition requires increasing autonomy from Russia, and in some cases competing with its powerful northern neighbour. For instance, Kazakhstan’s recent “Latinization” of the alphabet was seen as an anti-Russia policy, and at a recent summit of secondary Asian powers, “outside mentors” (i.e. Russia) were publicly denounced as problematic. More importantly, by closing Russia out of Central Asian markets and opening financial relations with Uzbekistan, Nur-Sultan is taking a public stand against Moscow’s economic interests. Russia serves the Kazakh diplomatic agenda, but directly contradicts its economic one, leading to palpable uncertainty about the future of their relationship.

Kazakhstan’s position is a complicated one. The country’s ruling elites are attaching themselves to China’s rising star, effectively exchanging their citizens’ civil liberties for their own private business interests. At the same time, the country is one of the few that require both Russian and American support, forcing it to play a delicate power-balancing game while trying to assert its own presence in Central Asia.