A Milestone for Suppression 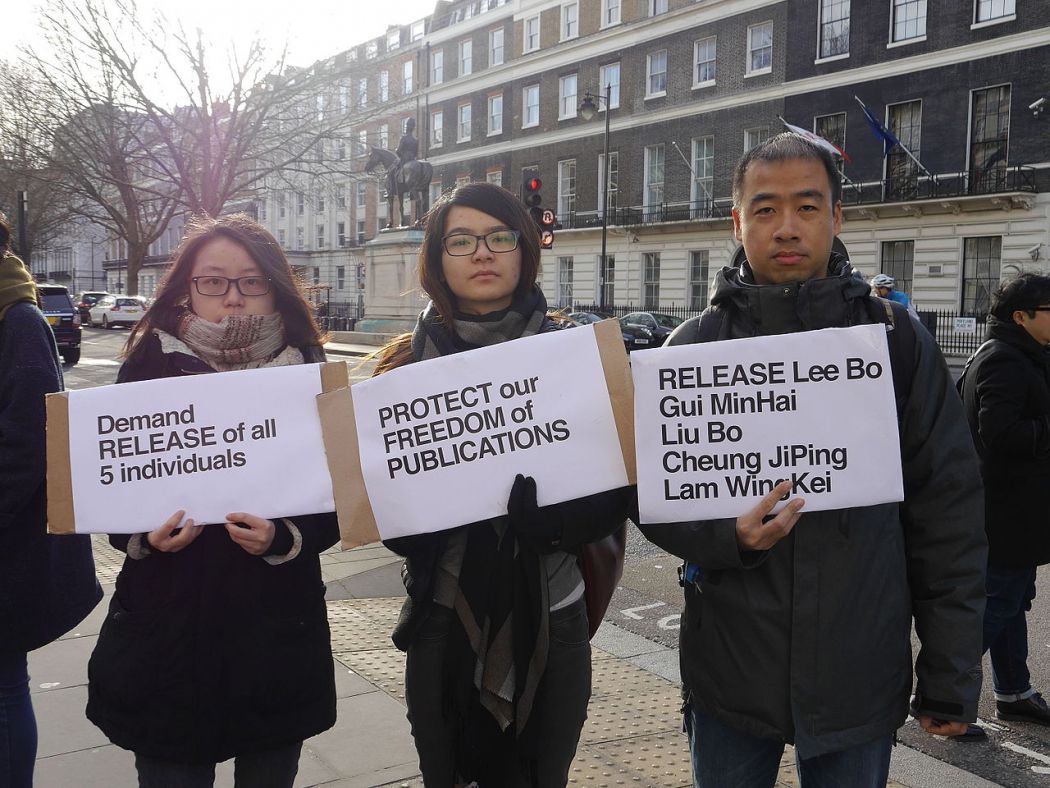 Protesters at Chinese embassy in London. Image from Wikicommons via Chris McKenna.
Share

The disappearance of five book publishers and sellers from a Hong Kong bookstore late last year has reignited suspicions that the Chinese government is overstepping its authority. All five missing persons are associated with Causeway Bay Bookstore and its related publishing house, Mighty Current, which is known for its publications that are critical of the Chinese government. Their books were particularly popular with tourists coming from the mainland where they are banned. Pro-democracy politicians and activists suspect that the recent disappearances are related to Mighty Current’s plan to release a book about the alleged love affairs of Chinese president Xi Jinping.

In October 2015, Zhang Zhiping, retail manager at Mighty Current, was taken by over 20 plain-clothed police officers with guns in their back pockets from his home in Dongguan, a city in southern China. In the same month, Gui Minhai, owner of the publishing house, disappeared from his holiday home in Thailand. A month later, police seized the company’s founder, Lin Rongli, and its general manager, Liu Por in Shenzhen, a city in the southern part of the Dongguan region.

Co-owner Lee Bo alerted the press when his four colleagues went missing in October, and told reporters that he had not visited the mainland for several years out of fear for his safety. However, Mr. Lee subsequently disappeared on December 30th, after last being seen at the company’s warehouse in Hong Kong.

His wife, Sophie Choi, told reporters that she received several short telephone calls from her husband, who informed her that he would not be back soon because he was providing assistance to an investigation. The number from the telephone calls suggests that they came from the mainland city of Shenzhen. Choi later realized that his mainland travel permit, which is required to cross the border, was still at home; thus no official travel records exist to confirm that Lee knowingly or willingly left Hong Kong.

Although Mr. Lee is a British citizen and Mr. Gui is a Swedish citizen, China does not recognize dual nationality and has not responded to international requests for information about their whereabouts.

In response to these disappearances, thousands protested in Hong Kong on January 10, 2016. Protesters chanted, “Say no to political abduction! Defend ‘One Country, Two Systems’! Don’t be the next to disappear!” while marching from government headquarters in Tamar to a liaison office for Beijing’s representative in Sai Wan. While the police say numbers peaked at 3,500, the Hong Kong Alliance in Support of Patriotic Democratic Movements of China reported around 6,000 protesters. In support of this protest, around 50 Londoners and Hong Kongers protested outside the Chinese embassy in London on the same day.

A smaller ‘but vocal’ protest occurred on January 13, 2016, in front of the Liaison Office of the Central People’s Government. It was led by Joshua Wong, the 19-year-old activist who led the 2014 Umbrella Movement, who told TIME reporters  afterwards, “It’s really a battle between Hong Kongers and mainland interference. This is proof that Hong Kong is not Hong Kong anymore. [Lee] is an innocent bookseller — even if his books discussed sensitive topics, what about our freedom of speech?”

Pro-democracy politician Albert Chan attributes the large number of protesters to the fact that, “For Hong Kong, this is the first time there has been such a clear violation of Hong Kong’s law, a clear violation of ‘one country, two systems’ principle, that has taken place in such an open manner.” Fellow pro-democracy politician, Lee Cheuk-yan, called these disappearances a “milestone for suppression.”

The strong concerns emanate from a long history of uncertainty regarding Chinese authority in Hong Kong. Although Hong Kong is supposed to have a large degree of autonomy under its Basic Law, whether this autonomy is respected is widely disputed. The 2014 Umbrella Revolution highlighted this erosion of sovereignty. Although its primary focus aimed to bolster democracy in Hong Kong, its broader perspective criticized the undermining of autonomy. Thus the disappearance of the booksellers and publishers reignited fears that mainland China is violating the separation between Chinese and Hong Kong legal systems that are supposed to be guaranteed by the constitution.

Since these protests, both Mr. Lee and Mr. Gui have publicly announced that they voluntarily went with officials to the mainland. In addition to his phone calls, Mr. Lee sent his wife a letter in his handwriting, which she confirmed belonged to him, affirming that he voluntarily went to assist officials with an investigation. Mr. Gui appeared on television on January 17th to confess that he voluntarily handed himself over to officials for his involvement in a fatal hit-and-run incident that occurred in 2003. However, Gui’s daughter Angela told Guardian reporters that she believes her father to be abducted. She did not comment on whether or not his confession is true, but stated that even if it were, she believes that is not the reason why he is in mainland China. Rather, she attributes the reason for his abduction to a political motivation given that his associates are also missing.

Amnesty International researcher William Nee echos Ms. Gui’s concerns, asking “Why would four other employees of a company need to go missing in order to assist with a regular criminal case? How could other missing or otherwise investigated colleagues of Gui Minhai have any connection to the case? What form of detention is Gui Minhai held under? Has he had access to legal counsel or consular visits, and if [not], why not?”

Furthermore, Ms. Gui discovered that a fellow Swedish citizen and human rights activist has been detained by Chinese officials. She stated, “I’m going to follow up now. This is a game changer.” Such an example would support claims that mainland China is overstepping its jurisdiction in order to censor what it deems threatening to its regime and to maintain its totalitarian suppression of human rights activism.

While this heavy-handed response by the Chinese government fuels the determination of the people of Hong Kong to resist the deterioration of their rights, it is uncertain whether the protests and international pressure will make a real difference. It is possible that by building upon the momentum of the Umbrella Revolution, and given the international attention it has received, these protests will succeed in pressuring the Chinese government to release the five arrested men. However, given China’s crackdown on the Umbrella Revolution and its refusal to yield to their demands, it cannot be ruled out that these recent protests will manage to push back against the gradual erosion of Hong Kong’s constitution and, ultimately, of the two-system structure itself.