A Political Fumble: The NFL’s Opportunistic Change of Tune on Colin Kaepernick and Black Lives Matter 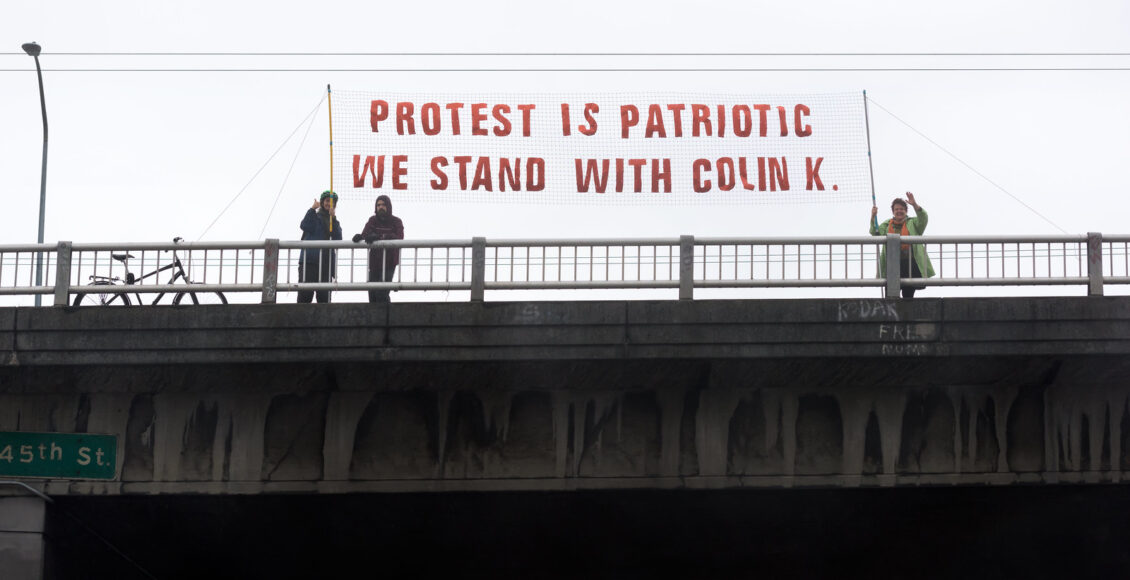 Protestors hold up a banner in support of Colin Kaepernick in 2017.
Share

Sports are inherently intertwined with culture and politics, and the recent efforts of the Black Lives Matter movement have been no exception. In the wake of a series of high-profile murders committed by police against Black people and the ensuing protests against police brutality and systemic racism, most of the major North American sports leagues have decided to take some form of action. Several have issued statements in support of BLM in recent weeks, and various initiatives have been launched either by the leagues themselves or their athletes. For instance, seven current and former Black National Hockey League players recently formed the Hockey Diversity Alliance to promote racial inclusivity and anti-racism in hockey. The response of the National Football League, the largest and most popular sports league in America, has arguably been the most surprising given the league’s history of discouraging and suppressing Black activism. On June 5, NFL commissioner Roger Goodell condemned racism and anti-Black oppression and publicly apologized for not listening to Black players about these issues earlier on. On June 17, he went as far as to admit he should have recognized the efforts of Black players earlier. To put these milestones in context, it is worthwhile to summarize the recent history of racism and protests in the NFL, and there is no better way to accomplish this than by focusing on the very athlete responsible for starting the conversation, Colin Kaepernick.

We, the NFL, condemn racism and the systematic oppression of Black People. We, the NFL, admit we were wrong for not listening to NFL players earlier and encourage all to speak out and peacefully protest. We, the NFL, believe Black Lives Matter. #InspireChange pic.twitter.com/ENWQP8A0sv

Racial divides in the NFL are structural and pronounced: according to a 2017 report, 70 per cent of NFL players were Black, yet there were no Black team owners and only 25 per cent of NFL teams had a Black head coach. Conversely, according to Nielsen ratings from 2016, 70 per cent of NFL viewers were white, while Black viewers represented only 16 per cent of the total. Moreover, political contributions from team owners (almost all of whom are billionaires) have heavily skewed towards Republican candidates, with at least nine owners contributing large sums to President Donald Trump’s campaign and inaugural committee. Lastly, the name of the Washington DC NFL franchise is a slur towards Indigenous peoples and has long been the subject of controversy. It was in this polarized and unequal context that then-San Francisco 49ers quarterback Colin Kaepernick began protesting against police brutality and anti-Black oppression in the 2016 NFL preseason. Kaepernick initially chose to sit on the bench during the anthem alongside teammate Eric Reid, who has continued this protest in the years since, but soon opted to kneel instead after a conversation with a veteran who suggested it would be more powerful and respectful. He was quickly criticized by NFL commissioner Roger Goodell, who emphasized the “patriotism” of the league, and by then-presidential candidate Donald Trump, who stated that athletes protesting the anthem should leave the country. Kaepernick had generated momentum, however, and an increasing number of mainly Black players soon joined in either by kneeling or raising their fists during the anthem. In addition to his anthem protests, Kaepernick announced he would be donating $1 million to Black community organizations, a promise he kept by donating to more than 40 organizations in the ensuing two years. He also founded the “Know Your Rights” camp, which seeks to teach Black youth about their legal and human rights.

By the time the 2016 NFL season had concluded, the NFL’s institutional backlash against Colin Kaepernick began. Despite recording impressive statistics on the season, including 16 touchdowns and a respectable 90.7 quarterback rating in only 12 games, and despite having taken the team to a Super Bowl four seasons prior, Kaepernick opted out of his 49ers contract in March 2017, as he was set to be released by the team anyway. Since then, he has remained unsigned and has not played a single NFL game, losing three full seasons of his athletic prime in the process, even though he has continued to stay in shape and repeatedly expressed a desire to continue playing. The motivations of team owners in keeping him out of the league are evidently political and racial rather than based on merit, as Kaepernick’s career statistics were substantially better than many quarterbacks on NFL rosters. However, NFL ratings had declined by 10 per cent in 2017 mainly due to a loss of white viewers, who accounted for 85 per cent of this total decline in viewership following the anthem protests. Further, in 2018, the NFL had the highest unfavorability rating among Republicans out of any brand surveyed, with 49 per cent of Republicans expressing unfavorable views towards the league, likely as a result of the continuing protests. The NFL’s subsequent silence on racial issues and punitive attitude towards protesting players was undoubtedly an attempt to mitigate the poorer ratings it experienced following the beginning of the protests. In May of 2018, the NFL banned kneeling during the anthem under threat of a team fine, leaving activist athletes the only option of remaining in the locker room during the anthem lest they face sanctions.

In November 2019, nine months after Kaepernick settled with the NFL in a collusion lawsuit alleging a conspiracy on the part of the owners to keep him out of work, the league finally appeared to extend an olive branch when they offered him a private workout in front of representatives from all 32 NFL teams. Promising as the offer may have seemed, it came with an important catch: no media would be allowed to be present at the workout, giving the NFL control over the narrative, and the ability to dismiss Kaepernick as out of form. Kaepernick sagely opted to refuse the NFL’s offer and instead decided to hold his own workout open to the media, which was attended by representatives from only seven teams. Although Kaepernick displayed solid form, he went unsigned through the end of the 2019 season, indicating a continued hesitancy on the part of teams to risk a backlash from white, conservative fans.

Look at this deep bomb. Question answered. Kaepernick still has his arm. pic.twitter.com/EkYO05Uk3C

Colin Kaepernick showcasing his skills to NFL teams for the first time in years. Via: Twitter.

Ultimately, the story of Colin Kaepernick is the story of a talented Black athlete who risked his professional career to challenge the status quo in a league whose executives and owners were largely hostile to his advocacy for a fair and just society. In doing so, he inspired his peers to continue following in his footsteps, even when he was ousted from the sport in retaliation for his efforts. The manner in which he has been treated is symbolic of the NFL’s relationship with Black athletes more broadly; for far too long, the league has expected them to remain silent and play the game in spite of persistent racism and discrimination. His actions lend credence to the old adage, credited to Einstein, that what is right is not always popular, and that what is popular is not always right.

In the aftermath of commissioner Goodell’s apology, the NFL has taken some steps to remedy the injustices in which it has been complicit. The league has committed $250 million over 10 years to combat systemic racism and anti-Black oppression (though it is worth noting that the league earns around $16 billion in revenue per season), and has attempted to center the words and efforts of Black players on its social media pages. It also reversed the 2018 ban on kneeling during the anthem, much to the dismay of the president. On July 3, the Washington NFL team announced that it would conduct a ‘thorough review’ of its team name. FedEx, which holds the naming rights to the team’s stadium, has urged the team to change the name under pressure from their investors. These initiatives were conveniently timed by the league, though, which only chose to take a moral stand when the BLM movement had begun to gain wider societal traction and greater support from white people. The NFL clearly still has a long way to go if it truly wishes to make a difference, from addressing the lack of Black owners and executives to remedying the hypocrisy of attempting to support President Trump and the Black Lives Matter movement at the same time. With regard to Kaepernick’s future, on June 16 commissioner Goodell went as far as to encourage a team to sign the quarterback, who has spent four years speaking out on the same issues the NFL has only acknowledged in the last few weeks. Actions speak louder than words, however, and so long as the originator of anti-racist activism in the modern NFL remains unsigned, any steps the league takes forward will be seen as both reactive and insincere.

The featured image, “Protest is Patriotic Solidarity with Colin K Freeway Overpass Bannering” by Backbone Campaign is licensed under CC BY 2.0.