A Rigged System or the Democratic Party? 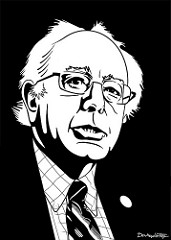 The 2016 Presidential elections cycle is an historical anomaly in American politics. From a record-setting seventeen Republican primary candidates to the most successful campaign led by a self-identified socialist candidate, there are few remaining indications required to demonstrate the ideological polarity and political disillusionment of the United States.

Within the crumbling political landscape on the right, an anti-intellectual, anti-minority, misogynistic, vitriolic businessman has championed the Republican Party, to the dismay of the Republican establishment and politically grounded voters across the nation. The Democratic Party, on the other hand, has stuck ‘to its guns’ with Hillary Clinton as the presumptive nominee over the independent democratic-socialist, Bernie Sanders.

Sanders rose swiftly, from a relatively unknown Vermont Senator who was a political outsider within Washington and a firm believer in the power of socialist and ethical politics, to become the populist leader of self-proclaimed ‘political revolution.’ Sanders’ simple, rational, and ethical platform as well as his plea for political enfranchisement and democratic principles, appealed to millions more voters than any analysts or mainstream politicians imagined.

Despite his favorability and grassroots success, many of his supporters argue that a rigged political system held him back from winning the Democratic nomination. Most Democrats scoff at this excuse, claiming Clinton’s qualifications, success in the Senate and as Secretary of State in combination with Sanders’ status as an independent and his championing of unworkable progressive fantasies led to his loss. Whatever position one chooses to take, it is important to note a severe shift in this year’s primary compared with previous ones, specifically that of 2008.

Starting with an acknowledgement of the current ‘age of information,’ the importance of media coverage in political campaigning becomes blindingly clear. This election cycle has been full of uncritical, sensationalist, and partisan coverage. One thing corporate media can agree on is the profitability of keeping Donald Trump and his controversial campaign in the limelight, as long and as often as possible. The New York Times estimated back in March that Trump received more than $1.8 billion worth of free media, dwarfing Clinton’s $746 million. Little weight is given to the disparity of coverage within the Democratic race, with Sanders receiving just over $320 million in free media. Moreover, the quality of coverage concerning Sanders and his campaign has been surprisingly uncritical and belittling by many reputable outlets, from the Washington Post to the New York Times. 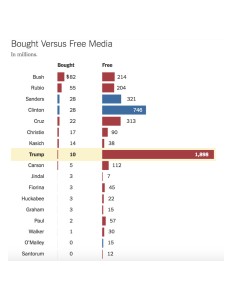 Besides pessimistic commentators positing Sanders’ campaign and ‘political revolution’ as fanciful and unrealistic, a pro-Hillary agenda within the corporate media world is not an absurd notion in the least. Most Americans understand the importance of having a wide range of media sources, perspectives, and a degree of balanced coverage. Likewise, most Americans would question the integrity and impartiality of one individual or one company owning, producing, and distributing the nation’s media. However, this has not stopped media conglomerates known as ‘the big six’ (including Comcast, The Walt Disney Company, 21st Century Fox, Time Warner, CBS Corporation, and Viacom), from dominating the market, as the F.C.C. continues to allow greater ownership of the market. These six companies now own 90% of media consumed by Americans, an unthinkably broad consolidation from 50 companies in 1983. With the rapid increased concentration of media ownership comes heightened wariness in the media, as a record low 40% of Americans have “a fair amount” of trust in news coverage. Nevertheless, awareness of this impartiality does not override the effect of biased coverage. The apparent pro-Hillary, anti-Bernie rhetoric in the news world might be explained by the preference of Time Warner Inc. and Comcast for Hillary Clinton. Time Warner (notable owner of CNN) has contributed over $600 thousand to Clinton throughout her political career while the executive VP of Comcast (notable owner of NBCUniversal) hosted a fundraiser for her campaign in June of 2015.

One might point out that Clinton was a favorite going into the primaries and that her greater and more favorable media coverage can be explained by her popularity and success. This sort of circular logic is something to watch out for: did Clinton get better coverage because she won over four million more votes than Senator Sanders and was thus more popular and newsworthy, or did she win the popular vote due to her favorable coverage relative to Senator Sanders? Predictably, a combination of both is likely the answer. An important actor to consider, in this case, is the one whose goals and intentions are most transparent and comprehensible—the Democratic Party and the Democratic National Committee (DNC).

The Democratic Party is one of the two major parties in the United States that holds power in the government. As an endogenous institution, politicians, activists, office seekers, and office holders shape the party. Its formal organization is incredibly variable and contains informal methods and traditions, which give party leaders a great deal of power. It is not uncommon to see a group of party members lay down party rules, followed by those same actors picking the subsequent outcomes. When all is said and done, “parties produce candidates, platforms, and policies,” while voters consume their party’s products in exchange for votes.¹ Voters are composed completely outside the institution, unless they become volunteers or activists they remain “‘brand name’ loyalists […] targets of partisans’ efforts”² to broaden their voter base. In this setting, politicians and office seekers join the party to gain broad support and funding, in return, supporting other party members and in most cases voting along party lines despite personal qualms. The strength of the party system is maintained by an understanding of rational choice theory and issues concerning social choice theory, as each player attempts to seek his or her goals.³

Within this framework it is clear that the Democratic Party naturally favors Hillary Clinton, a longtime member and supporter, over Bernie Sanders, an independent and relative ‘oddball.’ Sanders doesn’t support the Party above his own principles and views, and he isn’t an insider who is likely to campaign and lobby for less-than progressive Democrats. He isn’t accountable to the Party and thus he is an unsatisfactory candidate in the minds of many establishment actors. Despite his voting record lining up with Clinton’s more than ninety percent of the time and his advocacy for Party principles and goals, arguing for change above and beyond that of Hillary Clinton, he remains a threat to the political elite.

The roles of closed primaries, arcane caucus systems, superdelegates, registration deadlines, and voter purges sum to methods of maintaining party control. These are also the methods by which Sanders supporters argue the political system is rigged. The Democratic establishment contends that the party is responsible for taking into account legitimate party members in their selection of the Democratic candidate for president. More than half of Sanders supporters are independent or unaligned, and therefore the Party has no interest in insuring their votes are counted. Questions of favoritism, however, should not be taken lightly, as members of the DNC are neither permitted to support candidates nor sway voters towards one candidate or the other at the primary/caucus stage. Debbie Shultz, the chairwoman of the DNC, has been accused of favoritism in scheduling debates to strategically reduce viewership, neglecting to reprimand the DNC finance chairman who fundraised for Hillary Clinton, cutting the Sanders campaign access to the entire DNC database, and courting superdelegates resulting in 329 of 713 committing themselves to Clinton before the first Democratic debate in August of 2015. 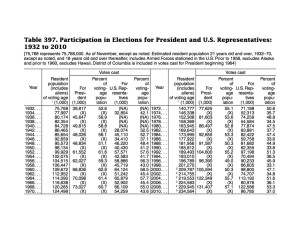 Whether or not one agrees with the policies of the Democratic Party, the process of electing office-holders in the United States is considerably undemocratic. Voter turnouts hover around 55% for presidential election cycles, and usually drop at least ten points for midterm Congressional elections. Moreover, the majority of registered voters are in fact independent, not members of either the Democratic or Republican Party. Despite the breadth of both parties, the existence of factions within each, and the ease of governance through the traditional two-party system, it continues to suffocate and divide political participation. Along with the exclusion of non-members in the primary system, lack of automatic voter registration at the age of eighteen incentivizes abstention and allows a few key players to dominate the political system. As Sanders enters the Democratic National Convention he will attempt to remedy the Party’s exclusivity, whether he is successful and whether it is in the best interest of the Party and its followers remains to be seen.