A Team for a Price: Relocation in the NFL 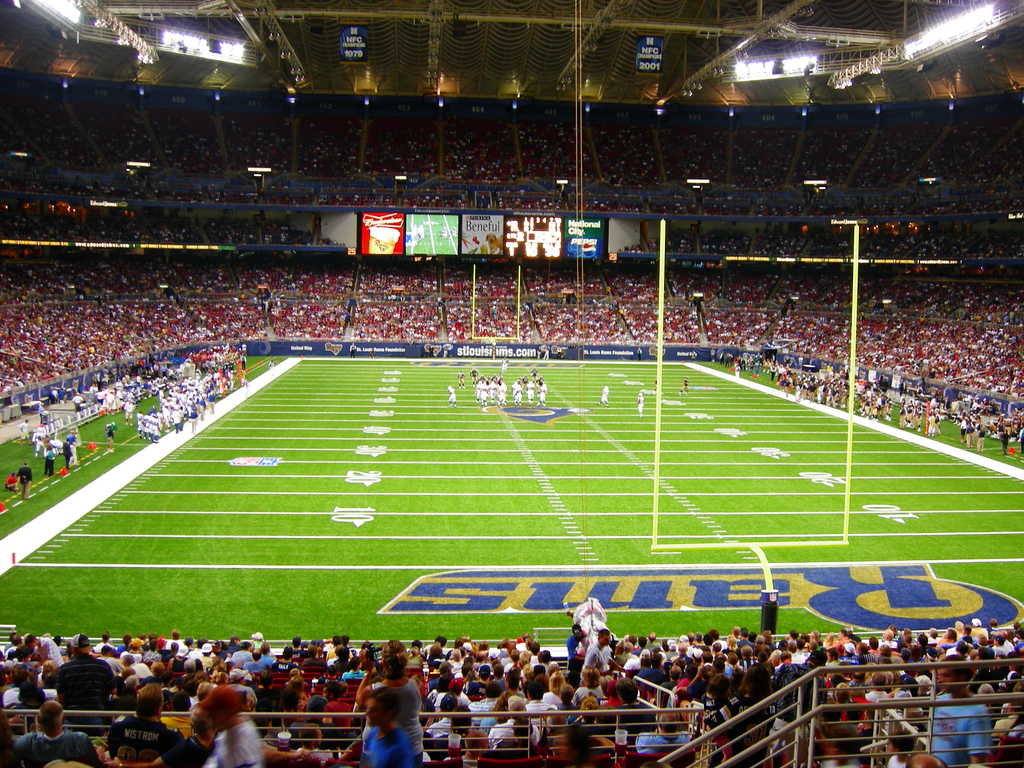 For some decades now, professional sports leagues have been an integral part of the culture of American cities, with teams creating a sense of collective identity among local fans. Since the American Football League and the National Football League merged to become the NFL in 1970, American football has become one of the most popular sports in the country, with Super Bowls accounting for 7 out of the top 8 most-watched television broadcasts in American history. Unfortunately for fans, NFL franchises are private, profit-seeking entities whose loyalty to their city is largely economically rooted. Though teams do seek to engage and grow their fanbases, they have a clear incentive to do so in the form of greater ticket and merchandise sales, as well as broadcasting deals. There is no better indication of the economic mindset of NFL teams than an examination of their relocations and the municipal politics therein, especially as it relates to the financing of new stadiums. In this article, the relocations of the Baltimore Colts, Cleveland Browns, St. Louis Rams, and San Diego Chargers, and the impending relocation of the Oakland Raiders, will each be studied in an attempt to identify common circumstances and strategies.

Given that sports teams aim to maximize profits, relocation is almost always an economic decision. If attendance is persistently low and stadiums are empty, teams may seek out a new, more football-hungry (and usually more populous) city instead. If the stadium infrastructure itself is perceived to be inadequate or outdated, teams almost always expect public funding for a new building. Should the city’s offer come up short or should a team-less city put forward a more compelling offer, relocation may well be a done deal. In the case studies that follow, this economic logic will be applied and its merit assessed.

By the end of the 1983 NFL season, fans of the Baltimore Colts had become frustrated with owner Robert Irsay’s personnel decisions, including his firing of a popular head coach and release of a beloved player, leading to a decline in attendance. Irsay himself had become disenfranchised with Baltimore;  his demands for a $25 million renovation to the stadium some years before had not been well received by the Governor of Maryland. In early 1984, Irsay’s intention to move the team had become increasingly obvious. The city of Indianapolis had offered Irsay a training facility and loan, and agreed to house the Colts in the $77.5 million Hoosier Dome (later known as the RCA Dome). The Dome was slated to be completed later that same year and had been financed with a mix of public and private funds.

As Irsay negotiated with Baltimore city officials on March 27, the Maryland state government began voting on an eminent domain bill that would see the Colts franchise seized by the city. This process, analogous to nationalization in industry, would have made the Colts city property, preventing a move. Having caught wind of this plot, Irsay packed up and dramatically brought the team to Indianapolis the very next day, before the bill could be approved. A legal drama unfolded, eventually being resolved in Irsay’s favour when it was determined that by the time the eminent domain bill had been signed (March 29), the franchise had arrived in Indianapolis and no longer fell under Baltimore’s jurisdiction. Thus, the Colts moved both for reasons of declining fan support and limited public willingness to finance stadium renovations. This, coupled with a substantial offer of financial support from the city of Indianapolis, was more than enough to seal the deal. Despite its best legal efforts, the city could not accomplish what a hefty sum of taxpayer funding seemingly would have in retaining the team.

A little over a decade later in 1995, Baltimore became embroiled in a contentious relocation process once more, except this time it found itself drawing a team away from another city. Amid diminishing revenues and an ageing stadium, Cleveland Browns owner Art Modell requested that the city provide $175 million worth of tax revenues for renovations to the stadium after first gaining the approval of Cleveland voters. The Browns had been in the NFL since 1946 and had long been one of the league’s more storied franchises, but this was not enough to save them from relocation. To the dismay of fans and local politicians, Modell signed a stadium deal with Baltimore, which financed construction using tax revenues.

A short time after, Cleveland voters overwhelmingly approved the tax changes necessary to provide the $175 million Modell had originally requested, but alas, it was too little, too late. The Browns moved to Maryland to compete as the Baltimore Ravens, and have since won two Super Bowl championships, even though a poll conducted in the aftermath of the initial move showed majority disapproval for the stadium deal. Ironically, the Cleveland Browns franchise was resurrected as an expansion team in 1999, but they have had nowhere near the same level of success since. Baltimore football fans have benefited from the presence of a generally successful team in their city, though this does continue to come at a financial cost to taxpayers. The Browns relocation is an interesting case: the desired funding was offered (even if slightly late), yet the team was moved nonetheless. This example would seem to reinforce the notion that if an owner is truly set on moving their team, nothing – not even the money they originally sought – will prevent them from doing so. This sort of attitude is equally observable in the next case study, that of the St. Louis Rams.

The Rams represent an even more complex case than the aforementioned, as their relocation was also a return to their former city. The team spent its first 48 years in Los Angeles before moving to Missouri in 1995 after several seasons of financial troubles. Curiously, NFL owners initially voted down the move (any relocation requires majority approval from the owners of each NFL team), but changed their minds a month later. The deciding factor in the approval was the promise of a taxpayer-funded stadium, the $280 million Edward Jones Dome. Fast forward 20 years and a Super Bowl championship, and an offer of $400 million in tax dollars for another new stadium in St. Louis was deemed insufficient. Rams owner Stan Kroenke decided instead to move the team back to America’s 2nd largest city for the 2016 season, with Los Angeles Stadium at Hollywood Park (still under construction) to be financed privately, a proposal which received near-unanimous approval from other NFL owners. The city of St. Louis has filed a lawsuit against the Rams franchise, claiming it violated league rules, but a decision has not yet been reached. The Rams’ move is comparable to the Browns move, in that the team rejected a massive sum of public funds in favour of relocation, with the major difference resting in the fact that their new stadium is privately funded. The Rams’ decision does become much less puzzling when one considers that Los Angeles has a population ten times larger than that of St. Louis, and thus represents a greater financial opportunity in the long run.

Perhaps the least contested of the relocations which have been discussed, the fate of the San Diego Chargers, was essentially decided at the ballot box. A proposal for a new publicly funded stadium failed by a modest margin in 2016, and Chargers owner Dean Spanos jumped at the opportunity to head north for the 2017 season. The Chargers are slated to share a stadium with their fellow L.A. team once it is finished and will undoubtedly share in the much larger market. Los Angeles has around three times the population of San Diego and is likely attractive to the Chargers for many of the same reasons as it was for the Rams. The fact that a referendum was held in order to decide the fate of the team renders this relocation much less controversial than the others. It is worth noting, however, that there is no guarantee the Chargers would have stayed in San Diego even if the ‘yes’ side had prevailed; as with the Browns’ and Rams’ moves, few forces can temper the will of a determined and wealthy team owner.

Just short of a year ago, the Oakland Raiders’ bid to move to Las Vegas was approved by a 31-1 vote, with the team now slated to be in Nevada within the next few seasons. Raiders owner Mark Davis had in fact been considering a move to L.A. but opted for Vegas after the Rams’ and Chargers’ moves were approved. Davis was given an offer of $750 million in public funding from its city-to-be, a sum which far exceeds any other encountered in the case studies thus far. Upon further analysis of Oakland’s own negotiation efforts, it becomes clear that the Vegas offer alone was not the only attractive factor, though. Oakland itself had offered the Raiders a stadium to be built by 2021, carrying an astonishing $1.3 billion price tag. Population size, while a potential factor, is not as significant as it may have been for the Rams or Chargers, since Oakland and Vegas boast a similar number of residents.  It is rather the reputation of Las Vegas as a world-class entertainment hub and tourist attraction that likely tipped the scales in its favour. In sum, the Raiders move appears to be motivated more by potential tourist revenues than by public funding or population size.

If one trend is evident in the relocation of NFL teams, it is that money is the best persuader. In most of the case studies examined here, when a team was choosing between its home city and a new city, the competitor willing to provide the largest public subsidy tended to win out in most cases.  Taxpayers are expected to put up increasingly large sums for extravagant new stadiums (sometimes, as seen in the St. Louis case, twice in 20 years). Local politicians find themselves stuck in a difficult situation as a result: they are expected to keep the team in town, while simultaneously avoiding excessive tax increases.

As the above examples have shown, this is all but impossible. It is not as if substantial subsidies are strictly necessary, either: the average NFL team brings in revenues to the order of several hundred million dollars each season. That the Los Angeles Stadium at Hollywood Park is being constructed with billions in private dollars is further evidence that the financial burden of new stadiums need not fall on the public tax roll. The economic benefits of a new stadium in a given city are also more modest than one might expect; teams mostly attract local residents rather than out-of-city or out-of-state visitors, and many of the in-stadium revenues (ticket and concession sales) enrich the team itself. In some instances, as with the city of Los Angeles recently, the sheer size of the city can justify the lack of a publicly-funded stadium and draw a team away from a smaller city that is willing to provide such a stadium. In others, it may be the reputation of a city or the size of its tourism industry that draws a team to town. Even the most drastic of legal actions can come up short against a quick-thinking businessperson, as in the case of Baltimore’s failed attempt at eminent domain.

If recent history is any indicator, small-market football teams with ageing stadiums should be wary in the coming years. Though teams are commonly thought to be defined by their cities, their fanbases, and their rosters, when talk of relocation emerges, only one group of individuals seem to hold all the decision-making power: their owners.