A Tribute to Former Congressman Walter Jones Jr: A Voice in the Wilderness 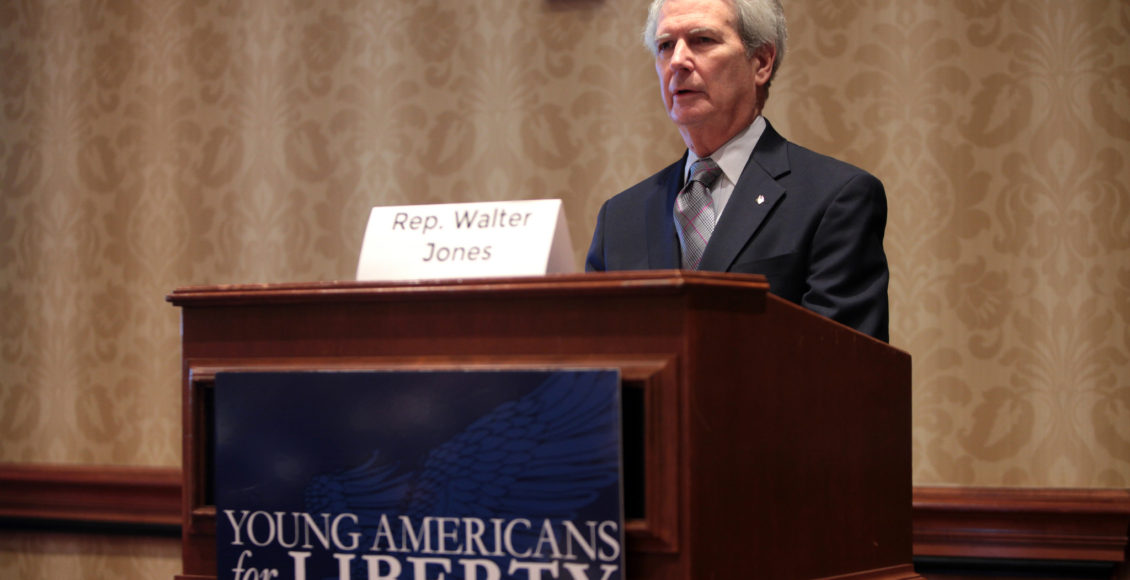 Legendary author Mark Twain once said, “It is curious that physical courage should be so common in the world and moral courage so rare.” The passing of North Carolina Third District Representative Walter Jones Jr reminds us of just how rare moral courage has become in Congress. An in-depth analysis of bill co-sponsorship shows that polarization has only gotten worse since the 1970s, when bill co-sponsorship was first tracked. The government, which just emerged from a shutdown that cost the US economy $11 billion, is on the brink of another one. With every election cycle, fewer and fewer members of Congress are willing to challenge party orthodoxy and vote their conscience. Representative Walter Jones represented one of the most prominent examples of moral courage in Congress, which deserves to be acknowledged and praised.

That’s not to say that Congressman Jones’ record is perfect. He once spoke out against a local community college purchasing educational books about Islam, doesn’t support same-sex marriage, toyed with impeachment of President Obama over immigration, and was the originator of the rather embarrassing “freedom fries” moniker for French fries during the Iraq War after France’s refusal to join the US’ invasion of Iraq. However, focusing on his imperfections only, as some on the left may be apt to do, overlooks the aspects of his career that made Representative Jones such a shining example of political courage.

After a stint in the North Carolina state legislature, Jones first ran for Congress as a Democrat, running against Eva Clayton and losing the primary runoff by a 9.5% margin. By 1994, he had switched to the Republican Party due to his pro-life views and defeated incumbent Democratic Congressman Martin Lancaster by a 5.4% margin, joining the Republican Revolution of 1994 that catapulted Newt Gingrich into the speakership.

Jones was certainly not a doctrinare Republican, especially towards the end of his career. Moved deeply by his adopted Catholic faith, Jones recognized his mistakes and actively sought to atone for them. After joining nearly all of the House of Representatives in supporting the invasion of Iraq in 2003, Jones attended the funeral of a local Marine Sergeant, Michael Bitz, who died in Iraq, which began to change his mind about the conflict. Not long afterwards, Jones began to pen heartfelt letters to every single family who lost a soldier in the Iraq or Afghanistan Wars. Not his staffers. Not his interns. The congressman himself wrote 12,000 letters. As recently as 2015, he declared, “I helped kill 4,000 Americans, and I will go to my grave regretting that.”

This shift precipitated Congressman Jones’ evolution into a principled paleoconservative who opposed foreign interventions of all sorts. Not only did Jones forcefully attack the Iraq War, but he also consistently opposed the Afghanistan war, intervention in Libya, intervention in Syria, and numerous other conflicts, making some controversial statements in the process, including noting that Dick Cheney would “rot in hell.” Jones was one of the few members of Congress who called at all times for Congress to provide authorization for military action, an oft-ignored portion of the US Constitution; this put him in alliance with members like leftist California Democrat Barbara Lee where interests converged. He even went so far as to call for the impeachment of Republican Vice-President Dick Cheney over his conduct of the Iraq War, as well as suing President Barack Obama over intervention in Libya. While perhaps some of his anti-interventionism was not prudent in foreign policy terms, it nonetheless represents a bold stance.

Jones’ unorthodox, but not unparalleled in conservative history, foreign policy represented a politically dangerous move in his Eastern North Carolina district, where Marine Camp Lejeune is a prominent fixture. Such a break from the usually hawkish, neoconservative-dominated Republican Party brought him a number of challenges from establishment Republicans unhappy with his dovish stances. In 2006, 2010, 2012, 2014, 2016, and 2018, Jones faced primary challengers who garnered anywhere from 15.06% of the vote in 2010 to 45.06% in 2014. In 2018, he was even attacked for being insufficiently supportive of President Donald Trump’s agenda, but still dispatched with challenger Scott Dacey by a margin of over 10 points.

Part of what makes Congressman Jones so special is the fact that despite heavy political pressure from back home, he never gave up the fight to stake out a principled position within his party. Jones didn’t just break from his party on foreign policy, he boldly declared his independence on a whole host of issues. Only one Republican voted against the Republican tax bill on the grounds that it would unsustainably increase the deficit—you guessed it, Congressman Walter Jones, walking the walk on an issue where Republicans talk a big game but refuse to act. When it comes to the economy, his populist stances are particularly refreshing. Jones joined Democrats like Bernie Sanders in lambasting the corporate dominance of American politics due to the Citizens United decision, which opened the floodgates for a tide of corporate money through PACs. He also took a seemingly progressive stance in pushing for reinstatement of Glass-Steagall, a financial services provision which forced banks to separate commercial banking activities from consumer savings. This would help prevent excessive Wall Street speculation from endangering consumers.

His concern for the fortune of the American people represents leadership of the highest quality, particularly because it countervailed the broadly held opinions of his own party. Representative Jones was one of very few Republicans to recognize America’s frightening drift towards oligarchy, as banks continue to grow, income inequality soars, and corporations play Congress like puppets. Other Republicans cozied up to corporations, but Jones retained this incredible populist streak that often led him to work alongside Democrats. On the Hill, I heard Jones referred to as the “last true conservative Southern Democrat, despite being a Republican.” Working in the office of a conservative Democrat, I saw this bipartisanship firsthand. On measures where we sought a Republican cosponsor, he would frequently be the only one to join our office, countering partisanship.

For that matter, he proved uncannily willing to take on President Donald Trump when so much of his party fell in line behind the beleaguered businessman-turned-President. No Republican in Congress voted in favor of President Donald Trump’s agenda less than Representative Jones, who voted against him in 50.7% of cases, more than half the time. When discussions arose of President Trump pardoning himself to avoid potential prosecution and impeachment, Representative Jones forcefully spoke out, telling Dan Rather that in his mind, President Trump had no right to do so. Jones called for House Intelligence Committee Chairman Devin Nunes to recuse himself from the Russia probe when it emerged that he sought cover for President Trump. No other Republican was brave enough to do so. He also sought investigations into Supreme Court then-nominee Brett Kavanaugh’s sexual assault allegations and into Trump’s ties to Russia. Not only did he challenge the Republican Party on policy issues, but Jones took them on when President Trump’s administration attempted to skirt the rules and cover up potential misconduct.

No matter the issue, Jones admirably held fast to his core values. He admitted to being wrong sometimes and refused to change his politics on a whim. This thoughtfulness often falls by the wayside in an era of soundbytes and social media. However, our democracy is better for it. Former Congressman Jason Altmire stated in his book, Dead Center, that “one way to get partisans to consider alternative viewpoints is by convincing them that opinion leaders in their own party are doing so”. This is the value of an unorthodox member of Congress. By resisting partisan whipping operations, mold-breakers push against hyper-polarization. With more members like Walter Jones, Congress would be a more representative, productive environment. Political convenience too often manifests itself in dual abandonment of conviction and cooperation. This flawed notion of political convenience was entirely lost on Walter Jones Jr., one of his most admirable qualities.

Beyond his conviction and deep regard for the state of the country, Congressman Jones was a kind soul. He was ranked in 2010 as the nicest member of Congress. Congress today is so often portrayed as a snake pit that personal anecdotes about Representative Jones attest to just how different he was. For example, Sean O’Brien, a former Hill staffer for Rahm Emmanuel, recounted a time when he worked with Representative Jones to honor those who died in combat overseas. Representative Jones even brushed off party leaders to finish his conversation with the young staffer.

It seems like everybody has a story about how the down-to-earth Congressman touched their life, no matter whether they knew him closely, or ran into him in an elevator, as I did. It was a hot July afternoon when, on an errand run in the Rayburn House Office Building, I spotted Rep. Jones carrying a poster urging the defunding of Saudi war efforts in Yemen (in 2017, over a year before mainstream figures began to urge it). As I waited with him for the next elevator, I nervously told him that notwithstanding our ideological differences, I greatly admired his willingness to vote against the Republican caucus when he saw fit. He was gracious in his response, telling me, “Sometimes you’ve got to be the voice in the wilderness and hope somebody hears you”. Congressman Jones’ words stuck with me, guiding how I live my life and practice my politics. At the end of the day, Congress was better for Walter Jones’ moral courage, a true rarity in Washington. Keep being that voice in the wilderness, Congressman. You will be greatly missed.