A War in the Woods: The Division of the Fairy Creek Watershed 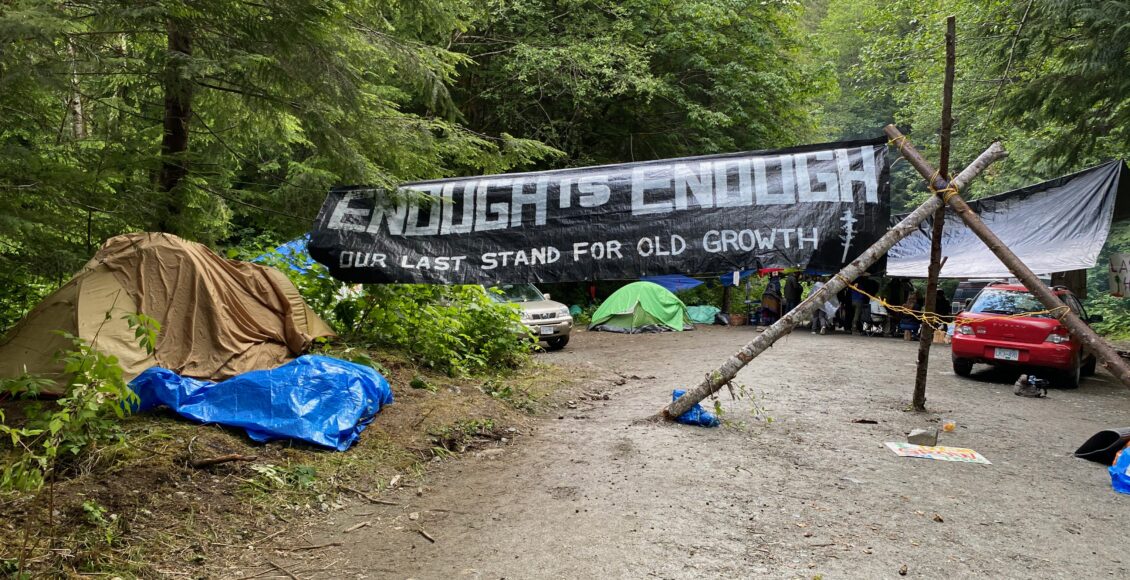 This is the first article of a two-part series on the Fairy Creek protests on Vancouver Island.

When Toad Vine introduced himself to me — four feet away and chained to a sleeping dragon — I laughed and asked if that was his given name. It was, he said, and I thought that maybe I had missed a joke. When his friend sat between us, introducing himself as Trash Bandit, I was immediately endeared by these two odd young men who chained themselves to a fallen log in a chunk of forest that the world had never heard of. Then I met Aladdin, who christened me ‘Buttercup,’ and I began to understand; to stand behind a blockade of stone and fallen wood in the middle of the rainforest of Vancouver Island is to lose your name and to become part of a movement.

Everyone knows a few names, and no one forgets: Teal-Jones, John Horgan, and Bill Jones stand among them. The latter, Pacheedaht Elder Bill Jones, is the man upon whom the movement depends. Bill Jones believes in defence of the land regardless of economic interest. He stands in opposition to the elected Pacheedaht Chief, Jeff Jones, who has stated that the “Pacheedaht do not support unsolicited involvement or interference by others” in their territory, “including third-party activism.” In short, the elected leadership of the Indigenous people upon whose unceded land the Fairy Creek watershed stands rejects protester interference. The protesters — hereafter referred to as the Rainforest Flying Squad (RFS) — are primarily white. Their interference can appear as an extension of colonial interference in the lives of the First Nations, specifically for the Pacheedaht and Dididaht. The Hereditary Pacheedaht Chief Frank Queesto-Jones has sided with the elected leadership. Bill Jones, however, posits that Victor Peter, who stands behind the RFS, should instead be recognized as the Hereditary Chief.

The distinction between elected and hereditary leadership is important and one upon which (to a degree) the legitimacy of the RFS stands. Jeff Jones, the elected chief, receives authority through the band system imposed by the government of Canada. Some, like Bill Jones, consider elected leadership to be an extension of colonial authority through a system that undermines traditional forms of leadership in diverse Indigenous communities. In contrast, Hereditary leaders are traditionally recognized as the legitimate leaders of Indigenous communities by many. In a conversation with The Narwhal, Huu-ay-aht Chief Robert Dennis emphasized the negative similarities between the actions of colonial governments and the land defenders. According to him, they are trying to stop Old Growth logging and, by extension,” [infringing] on…Treaty Rights” in a way that is paternalistic and upholding systemic racism in Canada.

Opposing this outside interference, Jeff Jones, as elected chief of the Pacheedaht, asserts his peoples’ right to land and economic activity. A moratorium on Old Growth logging would have a negative impact on the Pacheedaht’sPacheedaht’s yellow cedar sawmill, which employs 30 people and mills about 10,000 cubic metres of old-growth annually. It is a difficult relationship. The leadership of the RFS makes a point to emphasize that the protestors are in Fairy Creek on the invitation of Bill Jones and that the elected chief is not necessarily speaking for the whole of the Pacheedaht on the issue. Moreover, among the land defenders, the consensus seems to be that the defence of the living history of Vancouver Island is worth a possible overstep. The protestors make a distinction between Indigenous autonomy and the right to the land and a ‘veil of tradition’ that allows for the proliferation of exploitative capitalist practices in areas that should be preserved. The living history of Vancouver Island is in the last of BC’s old-growth forests: trees more than 250 years old which used to populate the entire Pacific coast but have been logged to oblivion during the colonial history of the region.

Despite the perception that the RFS is willfully ignoring the wishes of the First Nations groups involved, many land defenders don’t see themselves as infringing on the autonomy of the First Nations. Their quarrel is with the government of BC and the logging industry’s exploitative practices that control the province and the fate of the West Coast. According to a 2021 report by the Sierra Club, preserving the old-growth forests of British Columbia is an indispensable part of the province’s fight against climate change. The report argues that industrial logging increases the severity and frequency of climate-related disasters, including flooding and wildfires, which disproportionately harm marginalized groups in the province.

The NDP’s protection of BC’s forests has, in all meaningful ways, fallen immensely short. In the wake of a 2019 report that set out recommendations for the future of BC’s forestry sector, John Horgan and his government committed to 14 recommendations, including the protection of old-growth. During the most recent election, Horgan and the NDP election platform committed to protecting old-growth forests. Despite that, the NDP government has taken few steps — if any — to protect sensitive old-growth areas like Fairy Creek. This is why the protests didn’t end with the two-year moratorium on old-growth logging in Fairy Creek: to Pinto, a defender I interviewed, the “moratorium doesn’t protect enough. It is a little bit for a meaningless amount of time.” The moratorium also bears the unmistakable characteristics of the BC government’s “talk and log” policy: constructing a façade of environmental, conservatory action while allowing clear-cutting to continue essentially undeterred. Instead, the defenders want an end to old-growth logging as a practice, even though Nations like the Pacheedaht depend on it economically. All defenders I spoke to declined to comment on the future of the economic activity of the First Nations. As settlers, they conceded it isn’t their place to prescribe the economic future of the territory. However, they want old-growth logging to be absent from it.

It is undeniable that forestry is a central part of BC’s economy, employing more than 50,000 people and creating 1.3 billion dollars in revenue. The industry defends Old Growth logging because old-growth trees command a higher price and produce more than second growth. Despite the environmental harm of old-growth logging, the forestry industry insists that the loss of approximately one percent of BC’s forests annually is a necessary cost for thousands of jobs. As such, it seems unthinkable and financially irresponsible to prioritize the environment of the province. The Rainforest Flying Squad, evidently, disagrees with industry priorities.

Nonetheless, the Fairy Creek defenders are neither fools nor idealists: there is no pretence or wishful thinking in camp, and no one chains themselves to a tripod in the hope of ending the logging industry. We know that Old-Growth Logging is detrimental to the delicate and disappearing ecosystems of BC’s rainforests and that an end to the practice is both possible and necessary. This fact alone does not necessitate a defence of the logging industry. Rather, it opens the door to cooperation between environmentalists, indigenous groups, and industry in navigating resource extraction without transgressing the boundary to resource exploitation.