A Woman’s Place is In the House (of Commons)

A firsthand account of the April 3rd Daughters of the Vote protests in the House of Commons. 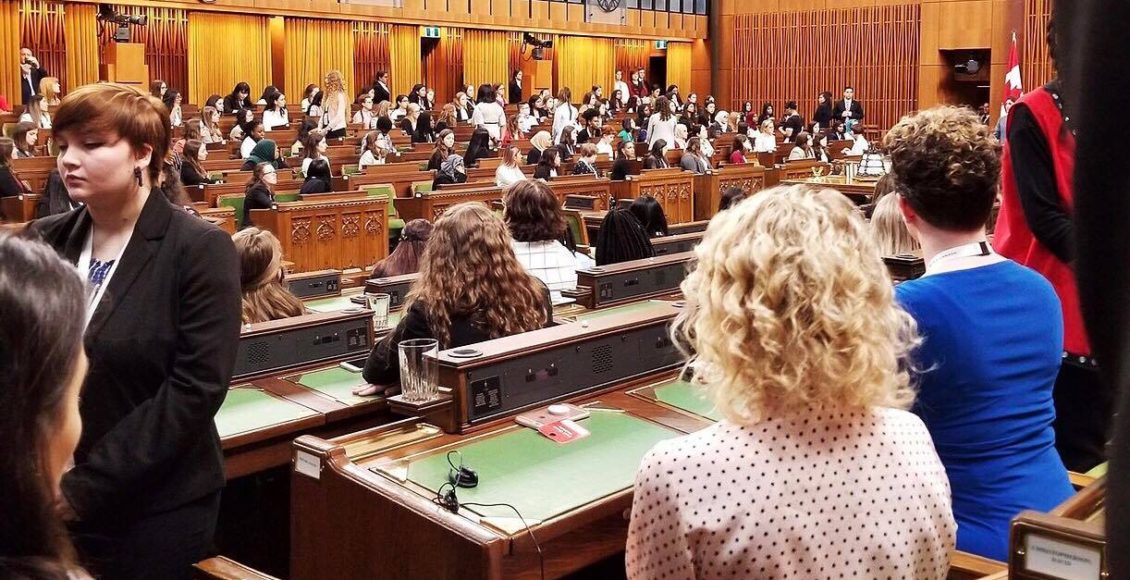 On Wednesday, April 3rd, as I sat in the House of Commons representing my voice and women across the country through the Daughters of the Vote Program, I witnessed firsthand an act of bravery by my fellow delegates. Hosted by Equal Voice Canada, the Daughters of the Vote Program was held in Ottawa and is aimed at engaging more young women from all over the country in Canadian Politics. The conference, which hosts 338 women of different backgrounds and representing different communities, gives these women the opportunity to sit in the House of Commons in a Member of Parliament’s seat. Sitting in the seat of Member of Parliament Kim Rudd from my home riding of Northumberland Peterborough South, I was able to take part in history as the House of Commons was filled with female delegates for only the second time in Parliament’s history.

While sitting in the House on Wednesday, April 3rd, delegates engaged in their constitutional right to peacefully protest. Once we were seated in the House of Commons, the floor was opened to some delegates in order for them to be able to give speeches they had prepared regarding issues that concerned them; the topics included everything from indigenous rights to the protection of farmers. After the testimonies from the delegates, many speakers were invited, including the leaders of the 5 main political parties who came to present. We were in Ottawa at a time of political tension stemming from the upcoming election and the continuation of the SNC Lavalin controversy, and thus as delegates, we were acutely aware of the conditions surrounding our program. With Jody Wilson-Raybould and Jane Philpott being removed from the Liberal caucus the day before, many delegates were outraged and hurt by the actions of the government. During the speeches of both Conservative party leader Andrew Scheer and Prime Minister Justin Trudeau, young women took the opportunity to raise awareness through protest for issues they were passionate about.

During Andrew Scheer’s remarks addressing the need for women in politics, numerous delegates rose from their seats to walk out. Throughout the speech which lasted around 10 minutes, Andrew Scheer made a series of remarks in which he recalled the women’s rights movement, and stated that Canada is a society in which women are truly free. As a delegate in the room, I was very frustrated to see the leader of the Conservative party claim to care about women in politics, especially when his own party voted against the Daughters of the Vote program itself, and then in addition, claim that women are truly free in society when Conservative policies continue to place barriers for women. Furthermore, the declaration that the Conservative party cares about all women in politics, particularly in the face of its treatment of marginalized communities such as people of colour and indigenous peoples, is one that showed a lack of respect for many of the people in the room. This is not the first time Scheer has been held accountable for his party’s policies on indigenous rights, with First Nations Chiefs booing him during a Question Period in December when he failed to concretely outline how his policies differ from those of Stephen Harper. A continued failure by Scheer to note specific ways to change the Conservative Party policies that Stephen Harper enacted has led to doubt in Scheer’s will to change them. During the 2015 election, the Conservative Party came under fire from many indigenous advocates after their failure to launch an inquiry into the 1,200 murdered and missing indigenous women in Canada. These lack of policies regarding indigenous rights from the Conservative party indicates to some a lack of will to fulfill promises of reconciliation with First Nations peoples in the country.

While an exact number of delegates is unavailable, an estimation of those who took part in the walkout during Scheer’s speech was around a third of the 338 delegates in the room. To best explain why some young women partook in the protest, I asked one delegate who took part, Areej Hashmi, to speak on her involvement: “I protested by walking out because of what Andrew Scheer and the Conservative party represent: intolerance, division, and selfishness. I am tired of the dirty political games the Conservatives indulge in closer to any elections taking place. The environment of hostility and fear mongering the Conservatives create make me fear for the safety of my loved ones, minority groups, and myself. I am tired of it. I am done with it. I wanted to show him that I am united with my sisters in our fight for our rights.” Another delegate, Kaitlin Bird, explained that she “walked out for Scheer because my family couldn’t walk out from residential school. They couldn’t walk out but I could. Scheer’s politics  aren’t for people like me as an indigenous woman.”

This momentum continued during the remarks of Prime Minister Justin Trudeau. In recent months, Trudeau’s policies have come under fire, especially concerning indigenous women. The day prior to our visit to the House of Commons, news broke that Jody Wilson-Raybould and Jane Philpott were removed from the Liberal caucus. Delegates and other indigenous activists at large have cited this as reason for concern of the intentions of the Prime Minister, with some claiming that these actions are a sign of him turning his back on his promise of reconciliation. While Trudeau spoke to the Daughters of the Vote delegates, around 40 young women stood and turned their backs to the Prime Minister for the duration of his speech. This protest has been highly publicized, but what has often been excluded from the conversation are the voices of those who stood. To elaborate on why they stood, delegate Hope Tuff-Berg stated: “I stood up and turned my back to continue the movement that Jody Wilson-Raybould and Jane Philpott started: to stand up for justice, government accountability, and ultimately, democracy. I’m thankful for our Indigenous delegates for leading the way and empowering me to follow them in this movement.” Another delegate, Kailey Arthurson, cited similar reasoning: “I turned my back on Trudeau because he removed Jody Wilson-Raybould & Jane Philpott from the Liberal Caucus. We wanted to make a statement of resistance to the Prime Minister. Like I said in my speech, ‘I stand with the women who are excluded & forcibly removed from colonial spaces.’”

In the days following the walkout, delegates who participated in the protests have routinely faced criticism and harassment. The delegates who protested have noted attacks from Members of Parliament, delegates, and the media, and described feeling unsafe at the conference. Directly after the sitting in the House of Commons, Minister of Women and Gender Equality, Maryam Monsef, who has largely been a supporter of the Daughters of the Vote Program, stated how she was “disappointed” in the “lack of respect” shown by delegates who had walked out during Scheer’s speeches. From a person at the level of authority that she is in, and considering she was a speaker at the conference and met many of the delegates, her disappointment over an act of protest indicates a lack of sympathy towards the causes that many women were advocating for. In addition to criticism, some delegates have been attacked by far-right groups online who have used photos of the delegates to promote islamophobic ideologies and hate speech. The photos and the Facebook page have since been taken down, yet not before receiving thousands of likes and inciting more hateful comments.

When considering these protests, I urge people to remember why we were there on Parliament Hill in the first place and to show compassion to those who peacefully demonstrated that day. As young women, we were given the rare opportunity to represent our communities and make our voices heard in a political culture that, for far too long, has excluded us; the women who stood and walked out that day did exactly that. The Daughters of the Vote program was aimed at engaging more women in politics, yet when women were engaged and used their platform to advocate for issues they cared about, they were ridiculed by many. This is demonstrative of the continued use of tokenism in politics, where women are used for photo opportunities, yet their opinions are discounted and ignored. If we want young women to truly be engaged in politics, we must support their right in this country to make their voices heard through peaceful means. The events of last week have proved in a variety of ways, from a variety of communities, that the voices of young women in Canada will no longer be ignored.

Follow this link to view footage of the event.

Catherine is a second year student currently pursuing a Joint Honours degree in Political Science and Gender, Sexuality, Feminist and Social Justice Studies. She specializes in human rights, feminism, and global activism. In her free time, Catherine enjoys listening to ABBA on repeat and complaining about the weather in Montreal.