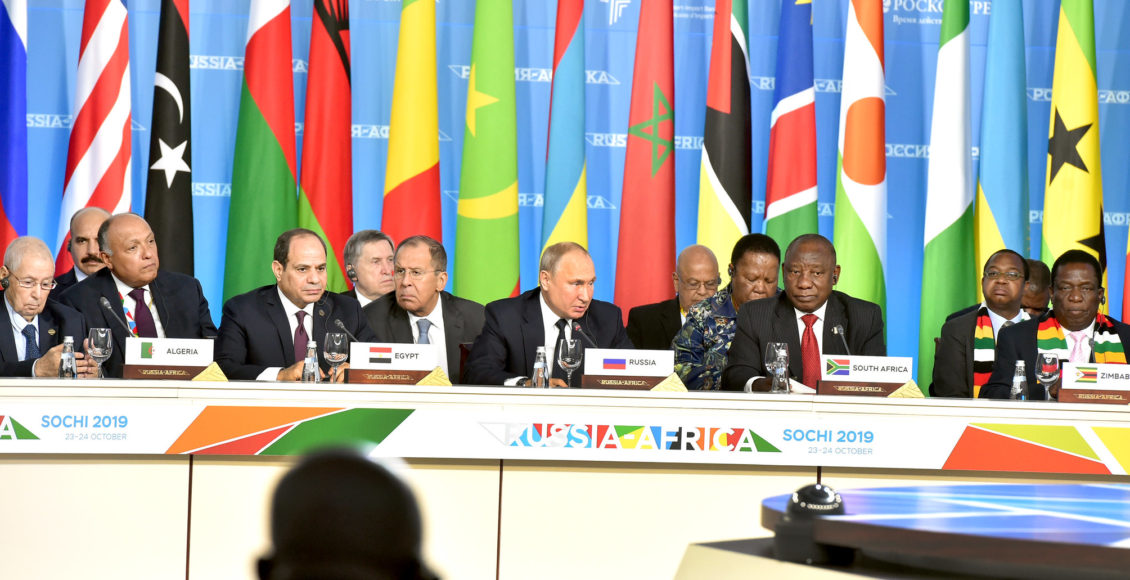 The international community is bearing witness to a battle for political dominance between Russia, China, and the United States. Russia has seemingly chosen Africa as its latest arena to expand its political influence and strengthen ties lost following the collapse of the Soviet Union at the end of the Cold War.

The most pertinent manifestation of Moscow’s efforts is the recent Russia–Africa summit that took place in Sochi from the 23-24 of October, where representatives from 43 states discussed diplomatic, military, and economic relations. Regarding the summit, Russian President Vladimir Putin stated that it had “opened up a new page in the history of Russia’s relations with African countries”.

Among Russia’s many offers to Africa, political and diplomatic support, increased defence and security funding, disease control advice, humanitarian relief assistance, and educational and vocational training are at the forefront. The Sochi summit is reported to have spawned up to $12.5 billion USD in deals, mostly consisting of defense and security arms orders. However, no guarantee of investment was contracted – they have instead been viewed as “memorandums of understanding” and, as such, are largely symbolic.

Why is the Cold War Important?

The historical context of the Cold War and the Soviet Union’s previous involvement with the  continent largely informs the current political dynamic in Africa. The Cold War marked the beginning of substantive Russian-African relations, as Nikita Khrushchev grew eager to exploit the instability arising from early decolonization efforts in the 1950s and 60s. The USSR saw the newly decolonized countries of Africa, Asia, and Latin America as future satellite states of socialism and bulwarks in the war against the West, and these perceptions have continued to influence Russia’s current relations with African nations.

During the Cold War, Southern and Central Africa were popular locations for proxy wars between the US and the Soviet Union as colonial influence from nations such as England and Belgium began to decline. The most prominent proxy conflict was the Angolan Civil War, which lasted from 1975 to 2002. This conflict, involving military and political intervention from not only the US and USSR, but also China, Cuba, and South Africa, eventually spilled into surrounding regions and destabilized the region, eventually culminating in the 1998 Second Congo War.

During the Cold War, the USSR backed various independence movements by way of large-scale military, cultural, and educational exchanges, as well as infrastructure development; these exchanges led to the cultivation of a long–term legacy of Soviet influence in Africa, and it is this very legacy upon which Russia hopes to build in their current diplomacy.

Putin is evidently striving to establish strategic alliances – it is notable that African nations are the largest voting bloc at the United Nations and that they frequently vote together on various committees. A strong diplomatic, economic, and militant relationship with Africa would ensure that African nations vote in favour of pro-Russian policies, which would dilute the influence of Western nations. For example, Russia has numerous “strategic partnership agreements” signed with African countries that involve debt relief, a diplomatic tool used to leverage African votes when the 2014 UN General Assembly criticized the Russian annexation of Crimea.

The Kremlin is guided by a certain philosophy, known in Russian as “russkiy mir“, meaning “Russian world”, a political and governmental concept that can be traced back to the Soviet Era. It seems as though Russia is seeking to re-establish its place on the international stage and restore its former superpower glory by invoking a modified version of the principle of “russkiy mir”. Evidently, this philosophy catalyzed the illegal annexation of Ukraine in 2014, the political decision that provided the foundation for Russia’s future foreign policy plans. In 2015, Russia’s decisive military intervention in Syria changed not only the course of its civil war, but increased Russia’s influence across the entire Middle East. Russia’s growing economic and military capabilities have allowed it to expand beyond the traditional bounds of “russkiy mir” and, quite literally, broaden its horizons in pursuit of global power.

Why Africa is Moving Away from American Development Aid

The discussion of a shifting global hegemony inherently involves the understanding that there is an emerging, divergent philosophy that seeks to spread its influence across the globe, a pursuit that competes with Western influence.

“With Western aid, there are all these conditions,” Albert Kofi Owusu, head of Ghana’s state-run agency, explained. “They say: if you want this money, you have to do this about LGBTQ, for example – even if it goes against your country’s values. China and Russia say, ‘here’s the money,’ and that’s it.” Africa’s attitude towards Western aid highlights the tension between sovereignty and universal human rights.

In this dialogue, it is particularly important that Putin stated that he will uphold the principle of “African solutions to African problems” and refrain from imposing Russian rationale to the African context. Putin was reported to have later said to a Moscow-based news agency that “we see how an array of Western countries are resorting to pressure, intimidation and blackmail of sovereign African governments”. Bakery Sambe, the director of the Timbuktu Institute African Centre for Peace Studies in Dakar shared the insight that Russia’s offer to collaborate instead of simply providing aid is preferred by certain national leaders who view Western outreach as patronizing. He went on to say “we [Africa] want equal exchanges, as opposed to colonial power relations”.

In order to effectively make inroads into Africa, Russia will need to compete with other great powers, who are also vying for influence in the continent. Globally, the fact remains that the US continues to be the top foreign aid donor, and one-third of that money goes to Africa. The US’ trade with Africa came to $39 billion USD in 2017, more or less eclipsing Russia. Furthermore, Russia’s current bilateral trade revenue of $20 billion USD is just an eighth of China’s and half of the US’, putting them significantly behind their two greatest competitors.

Russia’s strength, particularly in its relations with African countries, lies in its arms exports and military support. It has signed over 20 bilateral military agreements with African nations since 2015. According to the Stockholm Peace Institute analysis conducted between 2012 and 2016, Russia had become the largest supplier of arms to Africa, supplying 35% of exports to the continent while China followed at 17% and the US at 9.6%. This export amounts to 4.6 billion USD annually. While the US and China continue to dominate in the economic sector, Russia seems to be eagerly playing a game of catch-up focusing its exports in countries and regions where the USSR formerly held significant influence, such as Angola and Algeria.

Despite the ongoing efforts to cultivate economic growth through arms exports, Paul Stronski, senior fellow at the Carnegie Endowment for International Peace’s Russia and Eurasia Program, shared his opinion with the BBC that “Russia is nowhere near restoring the status that the Soviet Union once enjoyed on the continent”, elaborating further to state that “Russia’s clout in Africa remains tied to a handful of client states with limited strategic significance.” In terms of economic relations, Russia’s most notable partner states in 2015, many of whom continue to be close allies today, were Algeria, Egypt, Morocco, Guinea, Cote d’Ivoire, and South Africa – these countries accounted for 80 percent of Africa’s exports to Russia.

Russia’s push for influence in Africa has been criticized in that the various economic opportunities it focuses on have already been thoroughly explored, and exploited, by competitors such as the US and China. While there is some form of cooperation between China and Russia in their shared goals, it is limited to the nations taking similar positions during voting on UN peacekeeping missions. China continues to be one of Africa’s top investors and trade partners while Russia struggles to catch up after a 25 year absence after the fall of the USSR. Meanwhile, China is also gradually involving itself in local conflict resolution as well as maintaining regional stability, creating little opportunity for Russia to lend military support in areas not already supported by either the U.S. or China.

It is evident that Russia has a long way to go before it can re-establish itself as a major player in Africa. It remains unclear as to whether African countries can provide Russia with the partnerships they need to assert economic and military domination. The African continent will surely remain a region to observe in the coming years as the world waits to see if Russia’s goals come to fruition. Since the African continent is not a homogenous group of identical nations, but rather a deeply diverse region with different international goals, it will be interesting to see how the targeted countries cope with the competing influences of Russia, China, and the West.

The feature image, “Russia-Africa Summit”  from GovernmentZA is licensed under CC BY-ND 2.0.