All Quiet in the ‘West’ Wing

Americans have been ‘toasting to scumbags’ for years 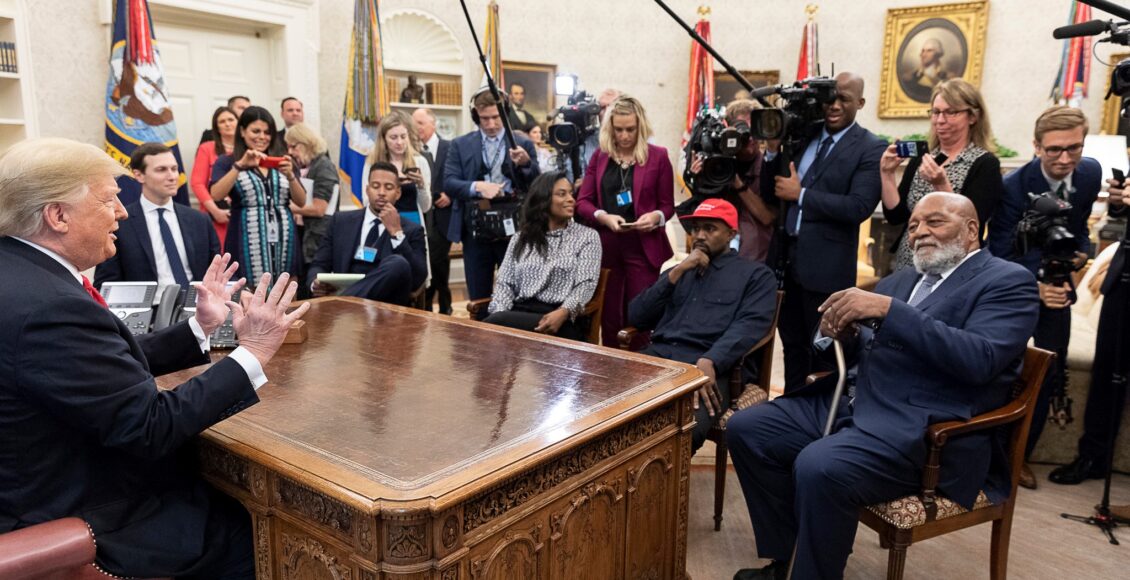 July 4, 2020, struck a somber note for many Americans. Some decided to forgo the annual barbecue amid COVID-19-related anxieties, while others recognized the irony of revelling in superficial patriotism against the backdrop of uprisings over systemic racism and police brutality. A lot of Americans broke with tradition this fourth-of-July, but Kanye West — who announced his presidential candidacy via twitter that same evening — was not one of them. Although he attracted outrage and disbelief, recent history suggests that Kanye’s 2020 “presidential bid” is not as outlandish as it seems. Instead, it sheds light on the disturbing priorities and requirements for American presidential candidates.

At the time of writing, Kanye’s intentions are still unknown, and predicting what will become of his candidacy is impossible. Given his proclivity for outrage marketing, Kanye’s “2020 Vision” could be the latest publicity stunt in his outlandish and ever-changing media persona. Conversely, if he is serious, Kanye’s delusions of grandeur would certainly explain his decision to join the presidential race with less than two months until the Republican and Democratic national conventions. Likewise, his friendships with President Donald Trump and his daughter Ivanka have made him a fixture of the Oval Office since 2017. When commenting on their unexpected relationship, West even noted, “He [Trump] is actually a nice guy, I hope to run against him someday.” But whatever his intentions may be, the announcement was remarkably on-brand for Kanye. What is unsettling is that Kanye’s “2020 Vision” is also on-brand for the White House.

We must now realize the promise of America by trusting God, unifying our vision and building our future. I am running for president of the United States 🇺🇸! #2020VISION

Kanye’s ability to turn national attention towards himself — and away from COVID-19 and ongoing protests  — is exactly the type of presidential behaviour Americans have come to expect under Trump. However, the impulse to claim unwarranted titles, accolades, or platforms is not unique to the current administration. This attitude underpins the psychology of the American Dream and Manifest Destiny, and it was Ronald Reagan’s skillful orchestration of public relations during the 1980s that first translated these ideals into the contemporary phenomenon of the media presidency.

The media presidency under Reagan

The legitimacy of independent news media or the fourth estate, as a precondition for liberal democratic governance, is enshrined in the Federalist Papers and the Constitution of the United States. While the free press is a constant aspiration for American democracy, its role was modernized by Theodore Roosevelt, who utilized the media to promote policies and, perhaps more significantly, himself. By establishing a permanent space for the White House Press Corps in the West Wing of the building and creating the position of the Press Secretary, Roosevelt secured control over the news stories emerging from the Oval Office. Likewise, Franklin D. Roosevelt and John F. Kennedy capitalized on the ability to manage public relations through the respective media of radio and television.

Following his victory against incumbent President Jimmy Carter in 1980, Ronald Reagan laid the foundations for the modern media presidency. Like FDR and JFK, Reagan cemented his status as a great American president by using mass media as a platform to project his rhetoric into the minds and hearts of Americans. Although Reagan’s glowing legacy is primarily the result of good press, his relationship with the fourth estate was not as progressive as it may have looked.

Like the many First Amendment rollbacks that occurred between 1981 and 1989, Reagan’s treatment of journalists during the final stage of the Cold War set a damning precedent for democratic freedoms in the United States. For example, immediately following the US invasion of Grenada on October 25, 1983, Reagan ordered a media blackout, barring reporters from the Caribbean island until circumstances were “consistent with safety requirements” of the Defence Department. The Federal Communications Commission (FCC) further stymied coverage of  “Operation Urgent Fury” by preventing ham radio correspondence with American medical students living in Grenada. As a result, journalists were forced to rely on White House officials’ statements, which grossly misrepresented events taking place on the ground as well as Reagan’s motivations for the attack.

Despite backlash from prominent news organizations like The New York Times and The Washington Post, Reagan’s reassuring confidence in the attack was a welcomed shift from coverage of Vietnam during the 1970s. Although his administration exaggerated the significance of the operation in Grenada, Reagan capitalized on his prior acting experience to reinvigorate a crumbling narrative about the triumph of American values abroad. His ability to do so, with limited public outcry, prompted Timothy Raphael’s observation that “Ronald Reagan had indeed become, in Michael Rogin’s apt phrase, ‘the image that has fixed our gaze.’” In many ways, Reagan’s popularity was a product of this fixed media gaze, suggesting that the greatest presidential asset is not shrewdness or transparency, but unwavering self-confidence that perpetually demands attention — the lack of which comes across as unpatriotic, unamerican, and ultimately, unviable.

The media presidency under Trump

Unlike Reagan, who was largely forgiven for his stance on First Amendment rights, Donald Trump’s efforts to undermine press freedoms have not fallen on deaf ears. His crusade against independent media, namely his desire to expand libel laws or his assertion that CNN is “fake news,” elicits appropriate criticism from news outlets and audiences alike. Still, Donald Trump engages in much of the same behaviour that Ronald Reagan did, albeit without his predecessor’s pretty face.

While both presidents created hostile environments for journalists, the most striking similarity between Reagan and Trump comes from their ability to be “the image that has fixed our gaze.” Just as Reagan centred White House press coverage around himself in lieu of meaningful policy discussions, Trump commands the bully pulpit with the provocative and ill-mannered stage presence of a reality TV star. Trump’s conduct in the White House, particularly when it comes to the rapid turnover of his senior officials, is reminiscent of his tenure as host of The Apprentice from 2004 to 2017. However, parallels between reality TV and the current administration are neither accidental nor idiosyncratic. More accurately, Trump’s leadership embodies the same guiding principle as reality TV and professional wrestling: kayfabe.

Kayfabe refers to the implicit contract between World Wrestling Entertainment (WWE) athletes and the audience, wherein the fighting is obviously staged, but its emotional impact is authentic. Compared to the performances of Dwayne “The Rock” Johnson and Hulk Hogan, Trump supporters make a similar concession — they do not necessarily believe his claims are accurate, but they are nonetheless galvanized by his rhetoric. The effects of Trump’s political kayfabe are twofold. First, by subordinating facts to emotion, Trump insulates himself from reality, lending to rationalizations that he is not as racist or misogynistic as his words suggest. Second, by monopolizing news coverage — with the help of profit-maximizing media executives — he has greater leeway to erode Constitutional freedoms.

Kayfabe, Kanye, and the West Wing

Because information gaps are unavoidable, presidents employ emotional appeals to link voters and policymakers. But without the fourth estate, the ability to recreate reality through kayfabe has ominous implications both in the ring and the West Wing. Just as WWE’s glorification of violence endangers uninformed viewers, Trump’s performances have shifted the bounds of what is acceptable in public discourse and the marketplace of ideas. Be that as it may, the tendency to invoke emotional authority through unlimited media attention is not Trump’s invention. Rather, this innovation dates back to Ronald Reagan and the other “great American presidents” who reimagined the role of reporters vis-à-vis the president as something akin to a reality TV camera crew.

The role of the President of the United States has outgrown its Constitutional foundations to include both executive and ceremonial duties. Whereas some countries call upon monarchs or religious figureheads to symbolize national pride and inspire the public, America does not have kings and queens to perform these tasks from outside the policy-making arena. But it does have movie stars, reality TV show hosts, and Kanyes who are more than willing to fill the gap, even by way of the Oval Office. Until the presidency and the free press are returned to their original intentions, the United States will continue to operate more like an authoritarian fracas and less like a functional democracy. At least it is good for ratings.