#alllivesmatter – Including the Canadian Aboriginals 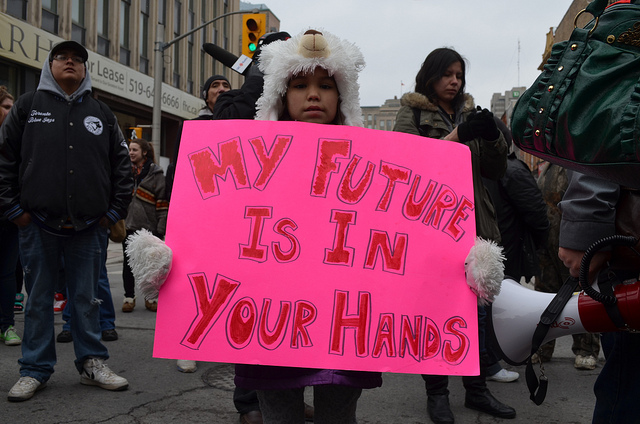 “The greatest resource we have in this country… is the children… We will have this journey together for as long as the rivers run, as long as the grass grows, and as long as the sun shines. That is our commitment to each other, and I am asking everyone tonight to follow through and make it true.”
–Charlie Angus, Timmins-James Bay MP

Attawapiskat First Nation community declared its 6th state of emergency in the past decade, with 39 attempted suicides in the months of March and April and 11 in the last weekend alone; this number does not take into account the 13 youth members – including a 9-year-old – who made a suicide pact on Monday but were overhead by residents and taken to the hospital immediately. As health Minister Jane Philpott stated, suicide rates among aboriginal youths are at least 10 times higher than for the non-aboriginal youths, when aboriginals only make up 4% of Canada’s total population. This appalling rate of suicide is a multicausal phenomenon that has existed since the residential school era, and frankly, the unfortunate deaths in Attawapiskat should not be a shock to the Canadian government or its citizens.

The first empirical study was done in 2012 on the effects of residential school on suicide, and it concluded that the history of abuse and cultural loss are strongly associated with suicidal thoughts and attempts. Residential schools, which ran from 1876 to 1996, took away 150,000 aboriginal children from their families and caused the death of 6000. These numbers are also extremely underestimated, because the government stopped collected accurate stats in 1920 with the sharp increase of death and illnesses. The effects still linger, as many of the survivors continue to commit suicide, from post-traumatic stress disorder, mood disorders, or substance abuse because drugs and alcohol are the only available resources to at least temporarily escape from those memories. Most importantly, the wounds are being passed down through multiple generations and giving rise to “trans-generational grief” and youth suicides. (Details of their mental health status are discussed in a previous article).

“Any ideas can pass from person to person… so the behavior can be transmitted… consciously or unconsciously”, described Laurence Kirmayer, the founder and director of Network for Aboriginal Mental Health research. This is particularly a concern for small, tight-knit aboriginal reserves. Most residents are close or distant relatives of each other, and children often move from house to house, getting exposed to the ideas and emotions of parents and grandparents. Although there are  children raised with love and care (especially as family and collectivism are highly valued in aboriginal culture), the current reality is that it is much more common to find homes with alcoholics, drug addicts and an overall sense of pessimism. Additionally, with the popular use of social networking among aboriginal youths, these negative ideas quickly spread and the power of groupthink becomes strengthened: such example includes a 13-year-old girl who attempted suicide because she was challenged to kill herself on social media. Key to preventing this suicide chain is to first understand social and child psychology, then to quickly identify a method of terminating these ideas.

Attawapiskat is a small town of 2000 residents, 956km north of Ottawa and only accessible by plane or ice road in the winter. This geographic distance aggravates issues such as unemployment and lack of resources. The multiple healing centers throughout Attawapiskat and other reserves are unstaffed, empty buildings. The 13 youths had to fly out to be taken to an adequate hospital, and not all of them were even seen immediately because of the overflow of patients who were there from recent suicide attempts. Half of them had to wait in jail, the only other safe place available, and even after short counselling sessions, some of them re-attempt suicide the day they come home. Jean Chretien, the former prime minister who happened to be on Parliament Hill on the day of the emergency debate, is currently being resented by the aboriginal community for suggesting that “there is no economic base there for having jobs and so on, and sometimes they have to move, like anybody else.” When a place is affected by disasters, human or nature-origin, the residents are usually not asked to “move.” And in cases that the region is a developing country, the international community rolls up their sleeves to aid with rebuilding and resettlement. Especially to First Nations people who are physically and spiritually connected to the land, moving into cities is extremely difficult. This is also ridiculous idea when the reserve is located beside the Victor Lake mine, which produced $392M worth of diamonds that should be under the ownership of aboriginals but was taken by De Beers mining company and the Canadian government through an extension of Treaty 9 in 1930.

“The news from Attawapiskat is heartbreaking. We’ll continue to work to improve living conditions for all Indigenous peoples” is what Prime Minister Trudeau tweeted on Sunday. This contradicts with his absence at the emergency debate that took place while he was attending a book launch. Very few people doubt his sympathy  towards this tragedy; but how is he to transform the relationship between the Canadian government and the First Nations people if he is not showing actions or commitments “work to improve” their lives? As Georgina Jolibois, NDP for Churchill River criticized at the debate, “communities… require help, not band-aid solutions.”

The 6-hour emergency debate did not conclude any tangible solutions. The process can start, however, by respecting the ideas of those who represent the aboriginal population. Jody Wilson-Rayould, the first aboriginal Minister of Justice, suggested getting rid of the Indian Act, which is robbing agency and self-government from the aboriginals. Angus also declared that the first step to take is to “close the gap on child welfare.” This includes initiating youth activities modelled after the Seabird Island Band’s “weekly walks in the wood… to bring our youth back to the land – to find their identity” and funding bands and artists to visit the reserves on a long-term basis, building relationships and empowering children.

The Supreme Court of Canada took decades to amend its laws on assisted suicide after being challenged with Carter v Canada, which claimed that every person has the right to die with dignity. Ironically, the same country that so strongly believes in the worthiness of life over anything is letting an entire group of population die. It will not be easy or simple to heal centuries of painful history, but hopefully this crisis will be a wake up call to everyone. Hopefully the sacrificed lives will not go to waste and Canada can eventually become a country where all lives equally matter.