An American Alliance in Confusion 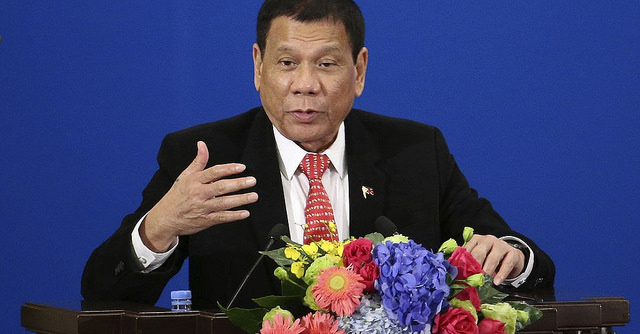 Duterte speaking in Beijing on October 20, announcing the separation of the United States and the Philippines. https://flic.kr/p/MtTrf8
Share

This past week Rodrigo Duterte, the new president of the Philippines, made a state visit to Beijing where he gave a public speech, the rhetoric and policy of which would indicate a drastic change from the sixty-year-long status quo.

“In this venue, your honors, in this venue, I announce my separation from the United States.” With these words Duterte began a half-hour-long speech in which he made explicit the Philippines’ separation from the United States in nearly every aspect: economic, trade and military. His speech could be described as at certain moments vaguely and politically salient, while being by-and-large highly irregular, and ultimately very bizarre. At times the audience seemed to barely know how to react. The Chinese Vice Premier, Zhang Gaoli, sitting next to Duterte was of course extremely pleased, evident from his broad smile. While the audience of assembled businessmen, Chinese officials, and media met Duterte’s remarks with unified applause at some moments and a deafeningly-clear, and awkward single applause for others, which seemed to remind the other audience members of their job.

Duterte bases his pivot to China on the weakness of the U.S and its failures in accommodation and policy towards the Philippines. According to Duterte, “both in military, not maybe social, but economics also, America has lost.” He then went on to state that the Philippines will be looking for allies in new places: “I’ve realigned myself in your ideological flow and maybe I will also go to Russia to talk to Putin and tell him that there are three of us against the world—China, Philippines, and Russia. It’s the only way.” His rant continued with criticisms of the United States ranging from their foreign investment/loan model, to Americans’ rude and loud manner, to a visa requirement inequality, to an incident at the Los Angeles Airport where a black guy in all black approached him and questioned him on a travel paper complication. He cited the US’s public and political mourning for fallen soldiers abroad as an evidence of American weakness. It really might be one of the more bizarre break-up messages.

The seriousness of Duterte’s remarks, despite them being made while on a state visit abroad, should be taken with a block of salt. Chinese officials have been pleased but restrained in their comments, with some Chinese scholars wondering just how long this phase will last. Since being elected Duterte has stated that the Philippine military will no longer be doing exercises with the U.S military and that U.S special forces, who have been working with the Philippine military on terrorism issues, would be booted out of the Philippines. On both occasions senior ministers later stated that he had been misinformed and that U.S troops will only leave once the Philippine military is capable of handling the issue on their own. True to form, on Saturday, October 22, the back-pedalling began in Manila as Finance Secretary Carlos Dominguez and Economic Planning Secretary Ernesto Pernia made a joint statement declaring, “We will maintain relations with the West but we desire stronger integration with our neighbours.” Duterte himself clarified his half-hour speech by saying he didn’t really mean a complete separation.

Duterte is no stranger to politically controversial remarks. When commenting on his plan to kill the drug-dealers in the Philippines involving extra-judicial killings, he compared his methodology and its future success to that of Hitler’s killing of the Jews, saying he “would be happy” to kill three million drug dealers. The United States has been strong in its criticism of Duterte’s acts, to which Duterte responded by calling Barak Obama “the son of a whore”.

Recent tensions between China and the Philippines came to a head in 2012, when China seized the contested strategically important Scarborough Shoal. As China did not respond to Philippine demands that they leave, the Philippines brought a suit to an international tribune at the Hague. Throughout the process China did not send any representative, and refused to participate or recognize the ruling. The Chinese government has failed to honour the July, 2016 ruling which was decisively in the Philippines’ favour, and they still occupy the shoal. However, China remains the primary export (24%) and import (17%) partner for the Philippines. In the wake of the South China Sea controversy, China had imposed a fruit ban on the Philippines. In the couple of days leading up to Duterte’s arrival, the fruit ban was lifted as a “gift”. Additionally, whereas the United States has been highly critical of the deaths of over 3,000 Filipinos, many of whom were extrajudicially killed as part of the drug war, China has been very encouraging of Duterte’s anti-drug campaign and its results.

With the United States, the Philippines secures a military partnership and protection at a very little cost to itself. The 1951 Mutual Defense Treaty requires the United States to protect the Filipino territory and sovereignty in the Pacific region and vice-versa. Duterte has said that he will pursue Philippine access to the Chinese-controlled shoal for fishing purposes. However, it would seem to be a strategic mistake to try to gain a concession from China after casting aside their most powerful ally.

This naturally leads to the questions, what is going on in the Philippines and how far it will go. Reports and analyses from journalists, officials, and think tank researchers yield a full gamut of possibilities. Some hail Duterte as a great realist thinker, while others say he should not be taken seriously, and there are others who see him as a thin-skinned and stubborn man mixing politics with personal feelings. Advisors close to Duterte have said that his view of the United States is heavily influenced by personal feelings and experiences. Before taking office Duterte had said that he hated the United States for the Meiring bombing. It could very well be that Duterte’s comments will be further retracted and contradicted in order to maintain their U.S relations.

Moving towards a more positive relationship with China is nothing new. With the exception of the last Philippine president, Benino Aquino III, recent leaders of the Philippines have reached out to China to diversify their relations and improve local communication. The colour to Duterte’s comments may just be the result of personal feelings and umbrage over the U.S.’s criticism. This could also be an attempt to gain additional resources and aid from the United States. During his speech, Duterte said directly to the Vice Premier Zhang Gaoli that as the Philippines no longer has relations with the United States they would be financially dependent on China for the coming years.

The Philippines is an important diplomatic and military tie for the United States. In Obama administration’s Pivot to Asia, the Philippines adds an additional regional legitimacy to the United States’ support for freedom of navigation in opposition to the Chinese attempt to claim and limit access to the South China Sea. In January 2016, the U.S. and the Philippines signed the Enhanced Defence Cooperation Agreement (EDCA) which would allow for a more regular and diversified U.S. presence, including permitting U.S. naval access to uniquely important ports.

Following Duterte’s speech, the U.S. State Department sent the Assistant Secretary of State for East Asian and Pacific Affairs, Daniel Russel, to Manilla to consult with the Philippine Foreign Secretary, Perfecto Yasay. His comments after the meeting touched upon the continued U.S.’s respect for the law in the Philippines and the value of their continued relationship. He also attempted to curtail the zero-sum tone taken by Duterte, “This should be additional not subtraction. We don’t want countries to choose between the U.S. and China.” Since then the U.S. Secretary of State John Kerry has said that he believes the U.S. and Philippines will be able to “work through” the issues. In his most recent statement, Duterte has stated that the Philippines will not form any other military alliance, and that the bilateral defence treaty with the U.S may not last. The future prospects for the United States’s positive working relations with the Philippines over the next five years and eight months may depend on the Philippine bureaucrats, specialists, and advisors who will have a busy job ensuring Duterte’s comments, remarks and policies are not overly offensive. Duterte won’t make it easy though.