After a major H5N1 (Bird Flu) outbreak, the Democratic People’s Republic of Korea fell into disrepair with Kim Jung Un’s execution and the rise of civil war. This was compounded by a widespread famine caused by the H5N1 epidemic which left North Korea in shambles economically, socially, and politically. The World Health Organization, which oddly enough provided military aid along with provisions, maintained some – albeit minimal – measure of order in the disheveled country. Six months later, in August 2018, in order to stabilize the country and ameliorate conditions for North Koreans, key members of the international community gathered together to establish a plan of action for the unification of North and South Korea. During the meeting, however, a historical event occurred: a nuclear weapon detonated in Aoji, a town close to the Chinese and Russian border, killing 5,000 people and destroying all or most land and plant matter in its close vicinity.

As a result, North Koreans fled across the unmanned borders into China and Russia, sparking a regional refugee crisis. North Korea became an even more ailing state and took center stage in international inquiries. Shocked and upset, members at the meeting had to address the consequences of the nuclear disaster without neglecting their original intention of unifying the two Koreas. The information first released indicated that the e 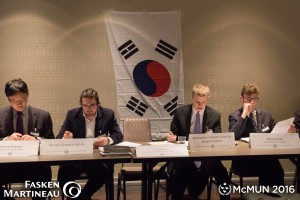 xplosion was a result of mishandling on the behalf of the Chinese, who were overlooking North Korea’s nuclear plants. Yet, as expected, members wanted to understand the specifics of the nuclear explosion and investigations, started by China, commenced. Many individuals at the meeting noted that even if this was not an accident, pointing fingers would not help the situation at hand. Instead of focusing on blame, members urged the committee to answer the question of how to help North Koreans.

With new information coming in on state responses to the crisis, some members became submerged in the events and were struggling not to lose sight of the original intention of the meeting: to unify the region in order to help the North Korean people, who had suffered for a very long time under a harsh dictatorship. Addressing all of these issues at once posed to be a difficult venture, especially considering the different geopolitical interests in the room. The distrust and rivalry between China and the United States was very much present in the meeting. Fortunately, some key members pushed forth strong policy ideas to help North Korea on every front. One such initiative proposed a multi-state effort to dismantle all nuclear weapons in North Korea.

Not only would this insure that nuclear accidents would not occur in North Korea again, but it would also demonstrate that these states can indeed collaborate and look past their mistrust and rivalries when called for. The efforts of several states to reunify Korea also demonstrated the states’ abilities to join together regardless of past. Although it may be surprising that states like the US and China were working together to pursue a common goal, with such an altruistic goal it seemed conceivable that states, in spite of their tumultuous histories, could come together. At least for this period of unfortunate events in North Korea, there was much hope that the states might continue to progress by working together to create a unified and stable country.