An Immigration System Worthy of WWII: How a Nation Built by Immigrants Goes Against the Values Portrayed in the ‘American Dream’ 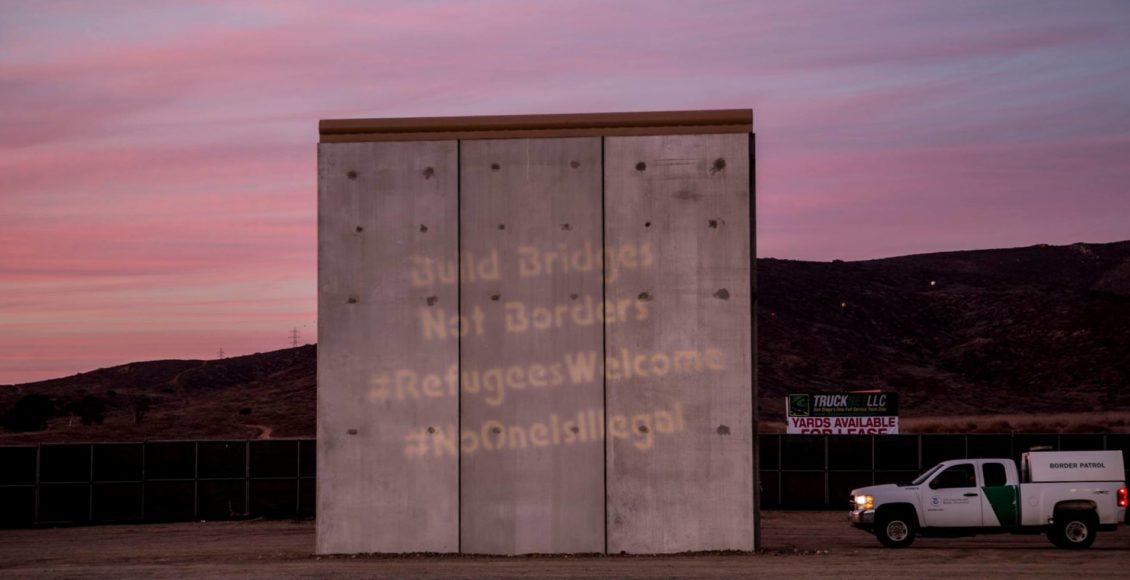 One of Trump's 2017 border wall prototypes used as a background to project activists' message of support to migrants at the U.S.-Mexico border. "Build Bridges Not Borders" by Jill Marie Holslin is licensed under CC BY 2.0.
Share

“When Mexico sends its people, they’re not sending their best…They’re sending people that have lots of problems, and they’re bringing those problems with us.” This undoubtedly infamous quote by United States President Donald Trump at the time of his presidential announcement speech on June 16, 2015 would come to reflect his administration’s immigration policies: confusing, ambiguous, and xenophobic. Trump’s policies have thus far differed from those of President Barack Obama in that they failed to set clear priorities as to who should be deported first, and who should even be deported at all. Although when looking solely at statistics, in its first three years the Obama administration deported nearly 400,000 more immigrants than Trump’s presidency, the vital aspect of this situation is the context in which these deportations are occuring.

In 2014, Obama established that certain groups would take precedence in deportations, the main ones being convicted criminals or people who had only recently arrived in the country, as it was considered “more humane” to send them packing than to uproot families that had already been settled for years. By contrast, Trump has failed on numerous occasions to take into account the particular circumstances of refugees, such as the reasons why they left their country, how long they had been in the country, or whether they had family there.

During his campaign, Trump even promised that he would work hard to remove the “unconstitutional” programs that had been put in place by his predecessors, challenging DACA, or the Deferred Action for Childhood Arrivals program, which was established in 2012 to allow migrants between the ages of 16 and 30 to defer their deportation for two years and live as legal residents enrolled in school or the military. This particular program was set to welcome one million people. As of now, it continues to protect approximately 700,000 young immigrants, despite Trump’s attempt to terminate the program in September 2017. Lower judicial courts prevented Trump’s abuse of power and appeals have since been made to the Supreme Court, whose decision will be announced by mid-2020.

Not only did the Trump administration increase the number of deportation cases lacking consideration for particular contexts, it also made it one of their main goals to prevent the entrance of new migrants from Central and Southern America by increasing border security. As part of his discourse since the very beginning of his election, Trump continued talks about a border wall between the southern states and Mexico, a border wall which, he announced in May 2019, was already under way. This physical barrier between the two countries is only a small part of the much bigger issue that revolves around the camps at the border and the number of detainees they hold.

Since Trump’s inauguration in January 2017, the detention system has increased its amount of occupants by more than 40%. As of September 10th, 2019, 52,722 people have been kept in these facilities. The rise of border camps at the southern entrances has made it easier to detain refugees for much longer than before and for the government to escape media coverage under the pretense of “increasing security.” This increase has made it harder and more dangerous for journalists and photographers to report on the situation. In January 2019, multiple photojournalists were stopped and asked for their identification by Mexican law enforcement forces, working on behalf of the American government. A few weeks later, some of them had been barred from re-entry into Tijuana. Upon further research, it was discovered that the United States had increased its investigative procedures regarding anyone who had been reporting on the migrant caravans. With the public not being fully or truly updated on what was occurring down south, the US government has not been held accountable for its actions regarding immigrants.

However, although Trump’s controversial immigration policies were only truly discussed in the media towards the second half of his presidency, they first began months before the deportation numbers increased exponentially and the detention camps appeared. Back in October 2017, the Trump administration started to separate families crossing the border, with as many as 700 children separated from their families by February 2018. Top advisors in Trump’s government had previously made public statements stating that they had considered taking migrant children away from their parents as a way to deter immigration into the US. Although this reason was officially denied by the administration, lawsuits were filed against this policy of family separation by organizations such as the American Civil Liberties Union, showing that groups believed this to be the reason enough to denounce it publicly.

Two months later, in April 2018, then-US Attorney General Jeff Sessions announced that the country was adopting a new policy regarding undocumented immigrants, which came to be known as the “zero tolerance” policy. Under such a doctrine, people who had not followed legal admission procedures when entering the country were prosecuted as criminals, with their families being split apart and children as young as 4 months being sent to detention centers alone. Two-and-a-half months later, Trump signed an executive order supposedly ending the separation of migrant families, although the Attorney General’s policy stayed active, which simply meant that while family separation was officially over, it would continue as it was still a consequence of the “zero tolerance” policy.

The latest in this string of immigration prevention policies was passed in January 2019, under the name ‘Migrant Protection Protocols’ (MPP). This new policy, better known as “Remain in Mexico” by the general public, is named exactly after what it does — asylum seekers will be sent back to the Mexican cities of Juarez, Nuevo Laredo, and Tijuana to await the US administration’s decision regarding their application for entry into the country. MPP, unlike what its name suggests, is not actually beneficial for the protection of migrants, as most are seeking asylum to escape war-torn nations or persecution in their home countries and sending them back into unsafe and unknown cities defeats the purpose of acquiring help in the United States. In multiple cases, asylum-seekers that have told their stories to journalists have reported that they were running from drug cartels and other criminal organizations that had threatened to kill them or their children. One family, since having been told to wait in the “tent-city” of Juarez, says that they “were fleeing violence, but it’s worse here”, thus demonstrating how the Trump administration’s policy of awaiting decisions outside the United States is a harmful one for many immigrants.

The result of these policies is that thousands of migrants are being detained in higher numbers at the border in comparison to past presidencies, and due to the overcrowding present in most southern facilities, the conditions are atrocious. Officials outside of Trump’s administration were finally allowed visits mid-2019, and some people, in particular Congresswoman Alexandria Ocasio-Cortez, referred to the centers as “concentration camps”, significantly alluding to World War II. The comparison to these camps has been warranted, as accounts of people who visited or were held there talk of inhumane conditions — people are not allowed to shower for weeks at a time, their only source of drinking water is out of toilets, abandoned children are taking care of each other without supervision or support from any adults, people are sleeping on concrete floors, most lack clothing, and detainees are kept in rooms that are way over capacity. This is a violation of human rights and the current United States administration has faced few consequences in comparison to the severity of the situation.

In the summer of 2019, protests were led all over the country in response to the horrendous measures taken by the government, and while the marches and activism died down, this immigration crisis is ongoing and still impacts thousands of South Americans seeking asylum. Studies regarding the psychological impact that the family separation policies have on both parents and children have shown that these traumatic events are akin to torture. The majority of those interviewed and tested showed symptoms of post-traumatic stress disorder, which, especially in children, will impact them for the rest of their lives. However, this is likely to be of little matter to Trump and his advisors as they have finally started to accomplish what he set out to do: immigration has dropped by more than 11 percent as of February 2020 and is still decreasing.

Discourse regarding immigration is a vital one in major European countries as well, considering the significant number of immigrants arriving from the war-torn Middle East and North Africa. This has been something that Trump commented on in the past, using “what is happening with immigration in Europe” as a basis to justify his belief that immigrants bring more violence and are the cause of an increased crime rate. Considering the United States is a major ally to mainland European nations, the position that has been taken by American conservatives has undoubtedly influenced the rise of far-right parties in Europe as well. This could explain why so many of them are gaining momentum in countries like France, Italy, and Spain, truly showing that this immigration crisis and forever-present question has grown past national borders and is having international repercussions. Besides the political impact of these policies, there is also a deeply personal one regarding separated families in the Americas currently. As of today, more than 1,500 cases of separated families remain, with many dating back to 2017, meaning they have been apart for more than two years. Young children are growing up without their parents by their side due to the Trump administration’s inhumane policies and controversial beliefs regarding South American migrants.