Antarctica in the International Political Sphere 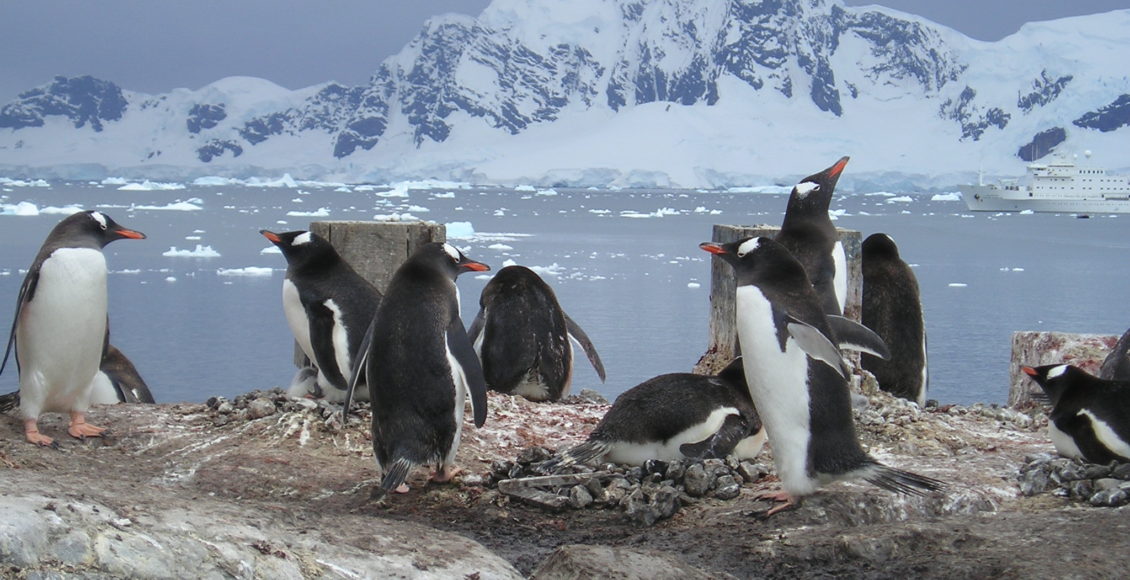 Antarctica—the “cold desert,” an international science hub and home to over five million penguins—is under threat. The continent is renowned for its ability to uphold global scientific research and cooperation, with several research stations established across the territory from eighteen different countries and in operation by over 10,000 scientists and staffers. The 1959 Antarctic Treaty, Antarctica’s regulatory agreement, denotes the continent as a land of peace, with a commitment to the preservation of its natural resources. However, in an ever-changing geopolitical world, coupled with a growing global concern on the future effects of climate change, Antarctica’s politics are becoming increasingly disharmonious.

What is the Antarctic Treaty?

In order to understand how the continent operates in the international context, it is crucial to explore the role the Antarctic Treaty has played in the territory’s governance. Signed in Washington on December 1, 1959, the treaty initially had twelve signatories, including France and the United Kingdom. Since the treaty’s inception, several other parties have joined, bring the total to over 54 signatories, including the United States and China. The treaty stipulates that Antarctica “be used for peaceful purposes only” (Article I), to support and enforce the “freedom of scientific investigation” across its land (Article II), and for such scientific inquiries to “be exchanged and made freely available” (Article III). 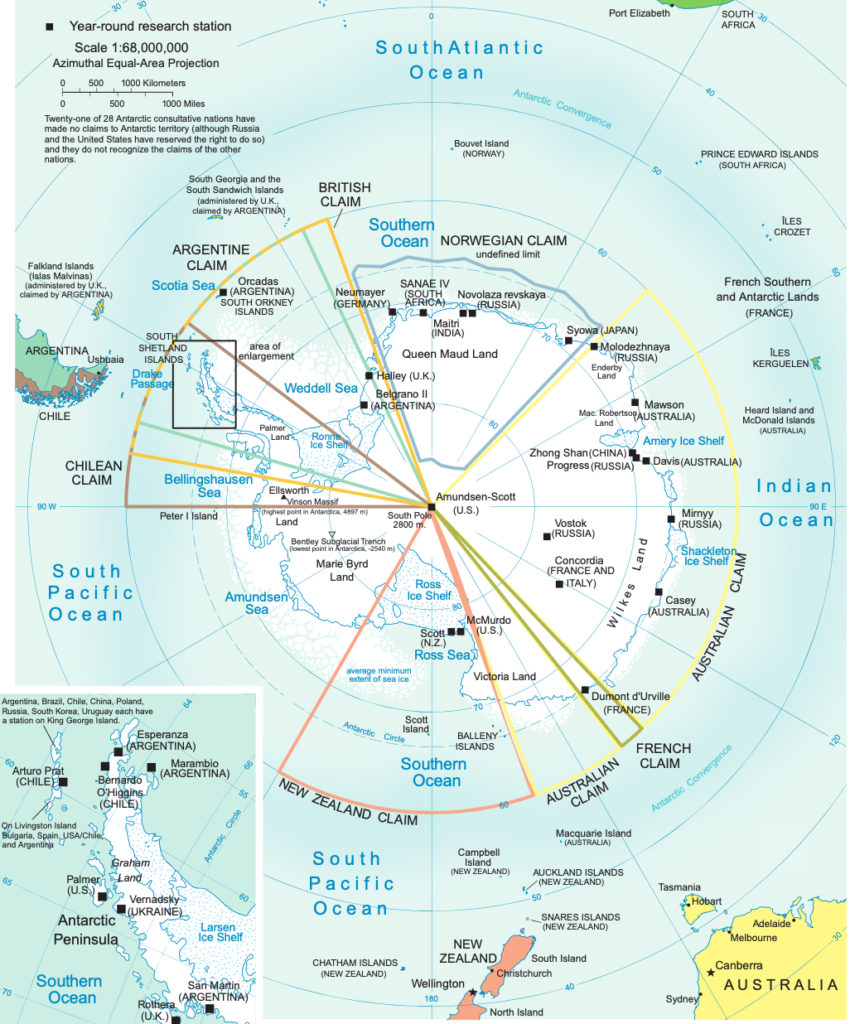 In order to foster cooperation between all parties, all states with research bases on the continent must disclose their scientific activities to other countries, as well as help conduct inspections on the activities of respective parties’ research bases. Evidently, the structure and operations of the Antarctic continent are an anomaly: countries must cooperate with each other. This sense of collaboration is especially surprising in an international community where nations increasingly forego collective action efforts in pursuit of their own interests. However, under the Antarctic Treaty, a lack of cooperation is punishable and forces signatories to cease any sort of research activity within the continent’s borders. Indeed, the Antarctic system seems to work well, with limited episodes of non-compliance by its parties.

The Sovereignty and Territorial Claims of Antarctica

It is especially important to note the unique sovereignty and nationality status of the continent. With no founding people in the traditional sense of the term, Antarctica is not a nation-state. As such, there is no concept of an “Antarctic nationality,” citizenship, or claim to the land of any sort. As a space where science is meant to flourish, the Antarctic Treaty enforces the notion that regardless of any country-based scientific research being conducted on the continent, a country’s endeavours alone will not constitute a basis to any sort of sovereignty over Antarctica. In fact, the Antarctic Treaty maintains that signatories cannot assert, support, or deny a country’s territorial or sovereignty rights claims over the continent. Furthermore, new claims and the expansion of existing territorial claims over Antarctica are prohibited under the Treaty. Antarctica’s sovereignty provisions are indeed perplexing—while the Antarctic Treaty stipulates that conducting research on its land does not guarantee any sort of territorial right over parts of the continent, it simultaneously does not outwardly deny claims to the sovereignty of Antarctica. As such, this system could potentially lead to territorial land claim disputes in the future as signatories vie to expand their influence.

The rights over Antarctic land ownership date back decades prior to the formation of the Antarctic Treaty, and since no other country or people have ever officially inhabited the continent, certain countries have employed a variety of unique schemes to boost their land claims over the region. Some of these schemes include the publication of ‘official’ histories to claim discovery of Antarctica or even atlases with a country’s so-called territorial land name claim over a part of the continent. Perhaps the most interesting case of all, beginning well after the signing of the treaty, are Argentina’s efforts to increase their ties to the land by sending women to give birth on the country’s Antarctic research bases. However, despite any of these seemingly comical efforts to claim Antarctic territories, the land remains—at least for the time being—as a scientific zone to promote international cooperation.

The Changing Nature of Antarctica

In 2048, several provisions under the Antarctic Treaty will be up for re-evaluation. One such provision is the Protocol on Environmental Protection to the Atlantic Treaty, which entered into force in 1998. Officially, it is under this provision where the continent of Antarctica is declared as a “natural reserve, devoted to peace and science.” Human activities are regulated under the environmental protection protocol: mining and natural resource exploitation are explicitly prohibited in an effort to preserve the environmental sanctity of Antarctica. With the Protocol on Environmental Protection up for re-evaluation in 2048, there is the potential for its provisions to be modified under unanimous agreement by the Antarctic Treaty’s Consultative Parties.

With 2048 approaching in a mere twenty-eight years, the future of Antarctica could ultimately change. While the continent’s natural resources currently remain preserved and untouched, they face the potential for exploitation. Major powers such as the United States and China could very well turn to Antarctica for their resource needs in an age of growing climate concerns and general uncertainty regarding the Earth’s future environmental status.

During the Cold War, the Antarctic Treaty became the world’s first successful arms treaty agreement. However, amidst rising sea levels and geopolitical tensions in the Antarctic region, the continent’s reputation as a land of peace threatens to turn into a land of conflict and disruption. Antarctica’s potential exploitation come 2048 arises from telling signs of emerging great-power competition on the territory as a means to influence the future of the continent. One example is the growing influence of Chinese operations in Antarctica, reportedly already having breached certain development and military provisions indicated in the Treaty. Leading Antarctic scholar Anne-Marie Brady has argued that China views the continent as a “treasure of resources.” These developments point to a potential shift in the nature of Antarctica’s status and resource utilization post-2048.

Unresolved power grab concerns are not the only factors that currently threaten Antarctica. Perhaps more inevitable are the growing climate change concerns facing the continent, given Antarctica’s record-high temperatures in 2015 and reduction in ice mass. The changing surface of the continent has therefore rendered resource extraction more easily accessible and may be mobilized in a political climate where countries wish to gain control in resource and commercial rich territories. 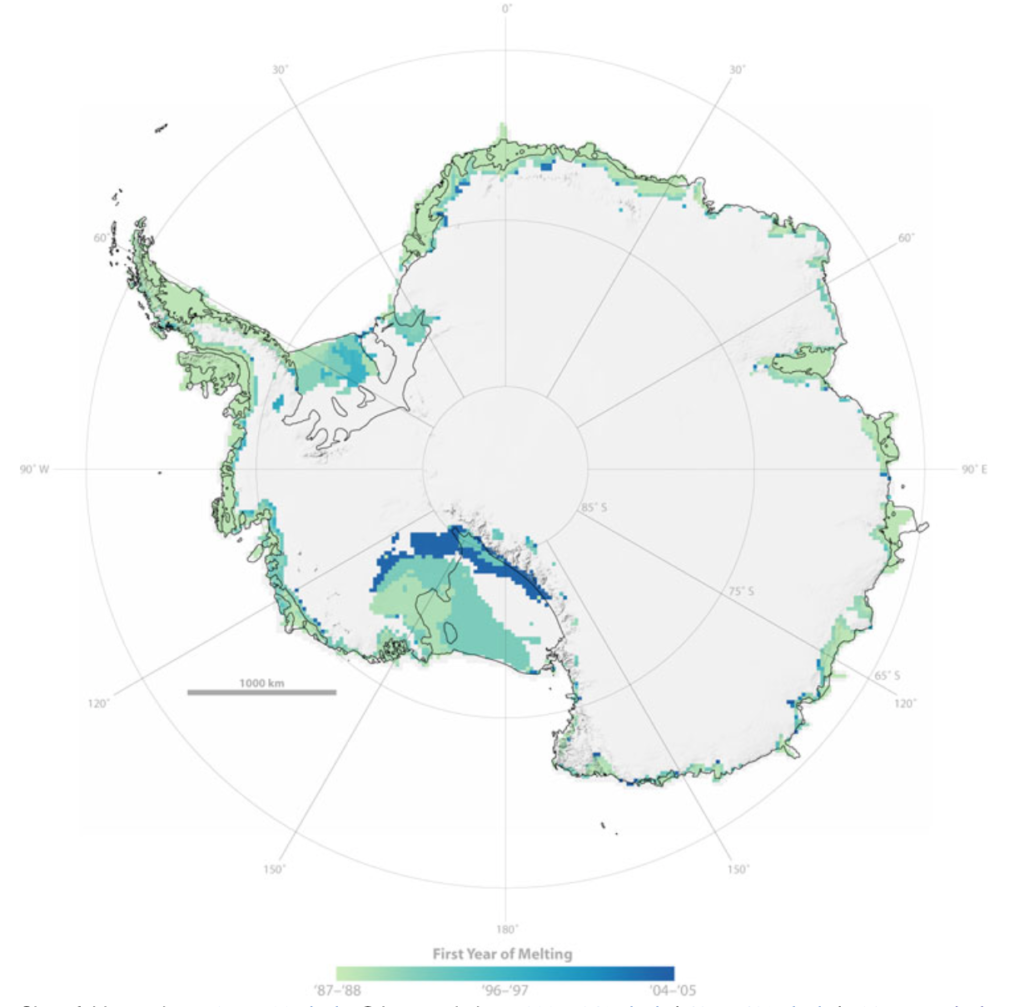 Map picturing previously un-melted snow in Antarctica (2007). This image is but one example of the effects of climate change on the continent. “Antarctic Ice Melt First Year” by NASA is in the public domain.

Where much of geopolitics is a space for power competitions to thrive, Antarctica currently exists as space of collaboration and calmness—a “Switzerland” of global politics, if you will. Antarctica is the quiet in a never-ending storm, and we must therefore pay attention to and exert the effort necessary to protect the continent and preserve its peaceful status.

The feature image, “Posing Penguins“, by Barry Thomas is licensed under CC BY-2.0.