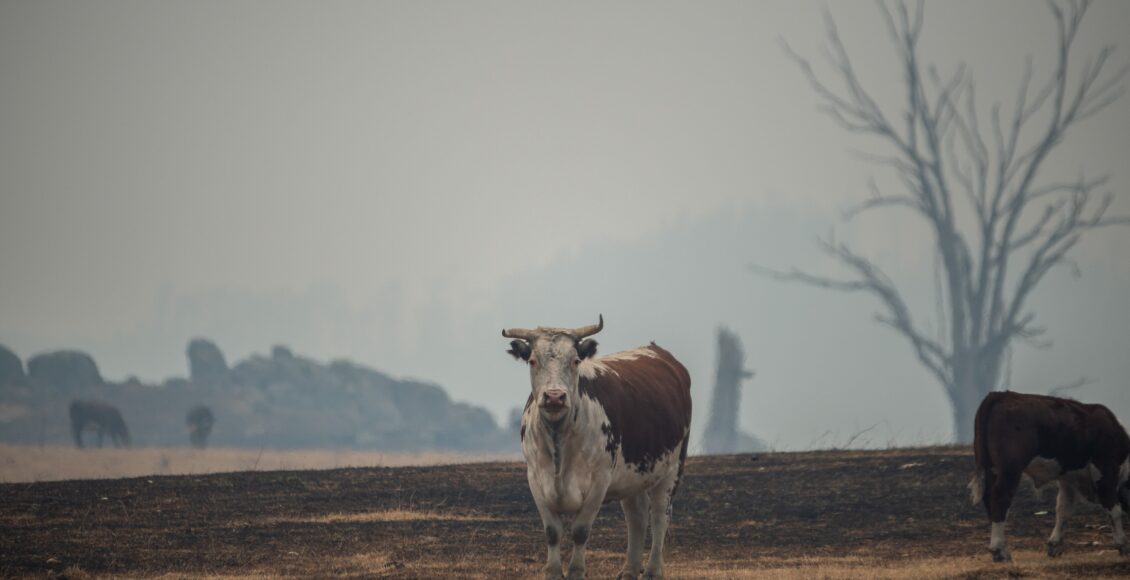 Featured Image "Cattle on dry, smokey landscapes in the Corryong area, Australia” by Jo-Anne McArthur is licensed under the Unsplash License
Share

Almost every day, we read another news article about the effects of climate change. While action is being taken to combat its inevitable consequences, scientists think that it may be too little too late as we reach and experience the threshold where the Earth will continue to grow hotter no matter what. In June 2021, the west coasts of Canada and the United States reached record high temperatures and broken on a nearly daily basis. While experiencing high temperatures is not entirely out of the norm, it should spark concern when proven to be the direct result of human activity warming the climate.

Humans have lived in between a narrow range of temperatures for most of history, which is optimal for abundant food production. As the planet begins to warm, however, people are fleeing North, where the most drastic effects of climate change are yet to be experienced, beginning an ever-expanding mass migration due to climate change. By analyzing past migration patterns of humans, we can see that people typically first migrate to cities from rural areas. As climate change is projected to displace over 150 million people, it is estimated that 68 percent of the world’s population will reside in cities by 2050. Consequently, the infrastructure and food supply of cities worldwide will be stressed and put to the test. While infrastructure can be modernized, the same cannot be said for agriculture and its supply chain. To adapt to the increase in urbanization, the agricultural supply chain of cities must change.

The effects of climate change on rural areas are apparent and abundant. From wildfires causing mass deforestation, extreme heat destroying crops, and unpredictable weather patterns reducing water availability, these ongoing phenomena are destroying what was once an abundance of arable land. This alone will cause a severe decline in crop yields. Livestock production and factory farming face similar fates as previously fertile lands used as pastures dry up. It is evident that current agricultural practices are not sustainable in an increasingly heated world. Combined with a sharp increase in population in urban areas, food supply in those areas will be at risk globally.

Thankfully, there are technologies, some already readily available and some still in development, that aim to remedy this inevitable problem. Vertical farming and meat alternatives both offer cutting-edge solutions to the aforementioned areas of traditional agriculture currently hurt the most by climate change. With the sharp decrease in arable lands, vertical farming promises to yield more output per acre while using less water. By adding a new dimension, crop production can be taken indoors, unaffected by the weather outside and allowing crops to be grown year-round. Likewise, meat alternatives offer a stable and reliable food supply that can be produced anywhere. With meat production accounting for more than 70 percent of global water use and 38 percent of land use, it is vital to use resources as efficiently as possible. Shifting agricultural and livestock production away from traditional methods will allow for a more efficient and sustainable supply chain around the world.

Seeing how climate change moves people and agriculture production into new areas, the two clearly go hand-in-hand. Along the same lines as vertical farming and meat alternatives, urbanization functions on the principle of using density as a measure of efficiency. In cities, energy and water use decline. With the number of people projected to be inhabiting cities by 2050, efficiency is key. Moving meat and crop production near cities through new methods benefits the shift to urbanization. Bringing the food supply chain closer to where people are will help reduce land pressure, inspiring the end of deforestation. This is critical, as giving land back to nature will actively help slow down the climate crisis.

It is hard to see how traditional farming can feed the world until 2050 using current agricultural practices. In the past year, the COVID-19 pandemic stressed other crucial supply chains. After the first few months of the pandemic, these chains quickly recovered as governments slowly lifted precautions and people returned to work. Moving forward, this will not be the case as farmlands continue to be decimated. Knowing that change is happening to agriculture now brings hope to an otherwise grim subject. Suppose we take the proper precautions and prepare now. In that case, we can ensure a certain level of well-being for the global population by using sustainable farming practices in conjunction with urbanization.

Climate change knows no bounds. It is set to affect everyone from all walks of life and in all areas worldwide. Every decision of inaction contributes to the worsening climate crisis and perpetuates the vicious cycle of environmental degradation. The ongoing COVID-19 pandemic serves as a test to see if humanity can avoid a predictable catastrophe. Now, in the latter half of 2021, we have shown that we have failed in most of the world.

The problems that plague COVID-19 and climate change action share the same fundamental trait: failed collective action. With the information available at the beginning of the pandemic, many ignored guidelines given by health professionals as both masks and vaccinations turned into political statements. Similarly, for years, scientists have warned about climate change and its effects on agriculture production. Again, we have failed to respond appropriately despite ample warnings in a timely fashion, but there is still time to act. Making preparations now to adapt agricultural techniques to urbanization can save time, allowing us to focus on more pressing climate issues in the future. Ensuring good food security for all is a must if humanity is to survive.

Featured Image: “Cattle on dry, smokey landscapes in the Corryong area, Australia” by Jo-Anne McArthur is licensed under the Unsplash License.