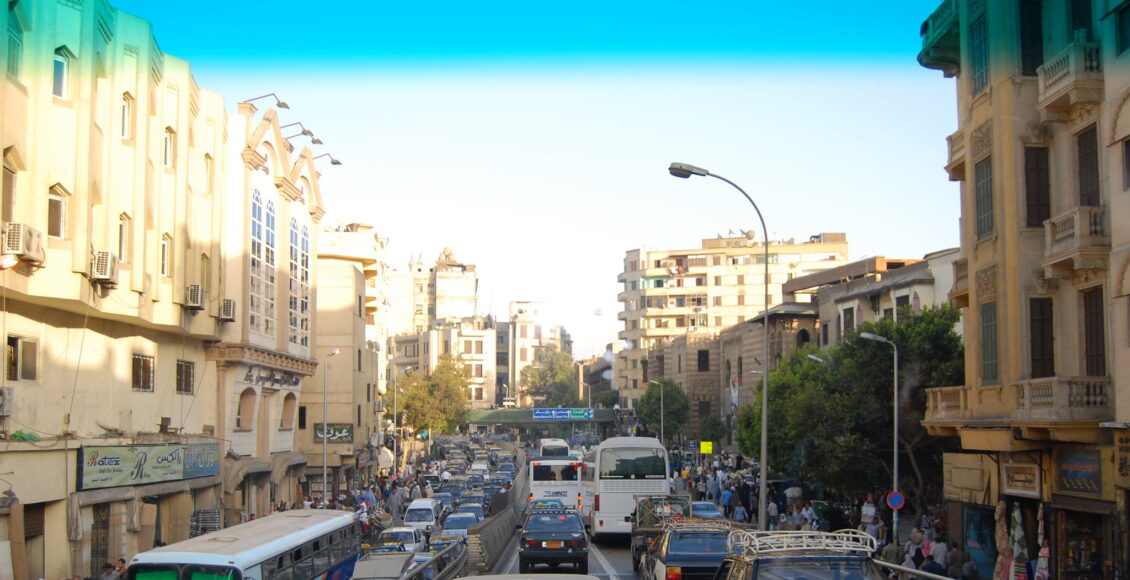 In one strip of Cairo’s Giza district, the usual whir of pedestrians and motorists is no more. What was once a typical scene in the bustling metropolis was replaced last spring by a 5-story, 6-lane monolith of black asphalt. The Teraat Al-Zomor bridge, the district’s newest addition, has left many neighbours agape; some parts of the overpass stand just a few inches away from adjacent apartment buildings. At least one resident has joked about inviting future motorists in for tea from his balcony.

When pictures of the overpass became the object of ridicule on social media last summer, Egypt’s Transport Minister Kamel El-Wazir berated the faultfinders, suggesting that people were misdirecting blame; it was not the highway that was built too close to the apartment buildings, he claimed, but the apartment buildings that were too close to the highway. His ministry alleges these residential buildings did not respect the city’s building codes — but most buildings in Cairo do not. Cairo’s bureaucratic quagmire of strict and burdensome zoning laws leaves most of the city’s lower-middle-class housing unregulated, or “informal” — a type of housing known as ashwai’iyyat by locals, meaning “disorder” or “randomness.” Nevertheless, the government has slated a handful of these ashwai’iyyat for demolition, allocating 250 million Egyptian pounds for compensation to residents who will lose their homes.

The Teraat Al-Zomor bridge is a small part of the National Roads Project, an ambitious $895 million plan started by President Abdel Fattah El-Sisi in 2014 to decongest Egypt’s roads and modernize its infrastructure. The project has been advancing at breakneck speed — more than 4500km of the 7000km of roads pledged under the plan have already been built — promising relief for Cairenes frustrated by their city’s notoriously bad traffic. Yet, it is the government’s ability to pummel through projects, ignoring the usual regulatory and consultative phases along the way, that has led to infrastructural nightmares like Giza’s new overpass.

A city of gridlocks

Cairo’s urban layout today is a tangle of streets and buildings resulting from municipal governments’ decades-long failure to adapt the city’s official masterplans to Cairo’s unexpectedly rapid population growth, leaving much of the city unregulated. Filling the city’s regulatory void was an administrative network willing, for a few petty bribes, to turn a blind eye to the conversion of nearby agricultural land into improvised ashwai’iyyat housing, which between 1996 and 2006, made up 79 per cent of the Greater Cairo Region’s new urban space.

This combination of laissez-faire government policy, fractured national and municipal power, and the proliferation of unregulated housing, set the stage for successive national regimes that were unwilling and unable to push through large-scale transportation projects. Thus, there was little incentive to build coherent roads if it meant bulldozing an existing, albeit highly dysfunctional, urban landscape.

Two of El-Sisi’s predecessors, Anwar Sadat and Hosni Mubarak, depended on parliamentary coalitions to enact their agendas, restricting their ability to govern without compromise. Moreover, Sadat’s Infitah policies reduced the government’s size and granted some participatory powers to locals during planning processes for major infrastructure projects. But, as Elena Piffero points out, such an emphasis on participatory planning in the 1980s and 1990s let micro-level concerns overshadow the wider social benefits of large-scale projects: residents tended to oppose a decongestion project if it risked adversely affecting their own neighbourhood. This decentralized approach to planning, and the government’s reluctance to spend large sums under Infitah, effectively thwarted any attempt to undertake major urban renewal plans. Simultaneously, Cairo’s transportation infrastructure was left sorely underdeveloped, even as its population more than quadrupled since 1970 and its need for proper arterial roads became ever direr.

El-Sisi in the driver’s seat

However, with El-Sisi at the wheel, the administrative and participatory roadblocks with which his predecessors dealt have been flattened out. On January 14-15, 2014, a mere seven months after he orchestrated a military coup that ousted the democratically-elected president, Mohammed Morsi, El-Sisi passed a new Egyptian constitution by referendum. Although boycotted by major opposition parties and a meek turnout of 38.6 per cent, a new constitution passed with 98 per cent support. Among the new reforms, civil society (including most grassroots organizations) was decimated, and parliament’s power was reduced to a dull pageant. El-Sisi argued that such measures were needed to put an end to the dysfunction and instability of Morsi’s Muslim Brotherhood, which had left millions of Egyptians disillusioned by the country’s experiment with democracy and had sent citizens to the polls five times in a little over a year. With his new, far-reaching constitutional powers, El-Sisi has been able to do what even his predecessors could not: unilaterally pass legislation and rule by executive order, allowing him to rule Egypt untethered from political opposition or public sentiment.

El-Sisi has gone ahead with a plan to build a stretch of highway across the City of the Dead, an ancient necropolis protected by UNESCO — a plan abandoned by Mubarak’s government in the 1990s after public outcry. El-Sisi, however, has successfully curbed any form of public opposition to the state thanks to counterterrorism legislation like Law 95, which defines terrorism as any form of dissent that might “harm national unity” or “hinder public authority.” Despite criticisms from conservationists, who fear the project will destroy ancient ruins, the project is proceeding with little political friction. Similarly, the planning and construction of the Teraat Al-Zomor overpass went on unopposed, as residents were unable to protest against it.

Cairo and cars: a toxic relationship

Cairo could certainly forego more cars on its streets. Private cars in the Cairo and Giza directorates represent over half of all vehicles on the roads and significantly contribute to the city’s chronic deadlocks. New inner-city expressways like the Teraat Al-Zomor bridge, however, will inevitably bring more traffic in the long term, not less: these effects have been felt in highway-dependent cities like Los Angeles and Sao Paulo, wherein 2017, the average commuter spent more than 80 hours per year on congested roads. Cairo’s new expressways also risk entrenching inequalities by benefiting wealthier Cairenes who can afford a private car — a luxury in Cairo that costs between 20 000 – 40 000 Egyptian pounds, roughly half the average household income in Egypt — at the expense of its large lower-middle class population.

Had El-Sisi’s government been open to public consultation, wiser alternatives would likely have been brought up, as there is a strong preference among locals for a more car-free Cairo. His government could have focused on expanding and improving the city’s bus and metro systems, cheap alternatives used daily by millions in the city. Or Egypt could have followed Algeria’s example and rebuild its tramway systems: Cairo’s network has been severely truncated since the 1970s to make way for more cars, but there have been no plans to revitalize it, despite recent successes in Algiers and Constantine to install comprehensive and accessible tram lines.

El-Sisi’s unchecked power has clearly allowed poorly planned expressways to proliferate. Only, unlike earlier top-down, Robert Moses-esque approaches to urban renewal, El-Sisi has the luxury of half a century of history to show that inner-city highways and good planning do not mix. But until Egypt’s president is jolted out of his delusions, Cairenes will have to contend with such short-sighted projects – expressways that promote more cars, noise, and pollution. And perhaps a few more 6-lane overpasses.