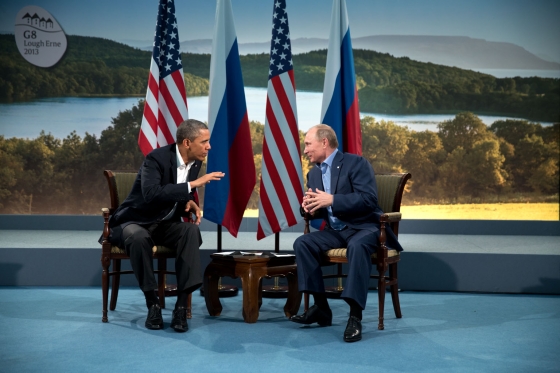 Obama and Putin meet at the G8 summit in 2013
Share

On Monday, Russian president Vladimir Putin announced that Russia would begin withdrawing select parts of its forces from Syria. This announcement, which comes in tangent with the news of closer Russian-American cooperation in Syria to combat the presence of ISIS, presents an optimistic perspective for future international cooperation between the two strong countries. Indeed, in recent years, actions and comments from the leadership of both states – particularly after the Russian annexation of Crimea – would have some suggest that the world is facing the emergence of renewed cold tensions between the United States and Russian. This notion, however, would not seem to be as appropriate of a term to apply to the current situation as there are clear differences between the present Russo-American relationship and that of 30-40 years ago. Nevertheless, questions surrounding the recent escalation of tensions does highlight the particularity of the relationship between the two.

Since the end of the Cold War and the collapse of the Soviet Union, Russia has been applying itself with vigour to regain that position of prominence on the world stage that it once held. The quick economic growth following the chaos of the 90’s and the rich natural wealth of the country have let it accomplish precisely that. Internal economic stability and consolidated domestic rule have allowed Russia to focus more on pursuing its interests in the surrounding neighbourhood. This concern with maintaining the Russian sphere of influence is greatly credited with exacerbating if not directly causing the Ukrainian crisis. Domestic unrest in Ukraine and the overthrow of the government allowed Moscow to tactically assume control over Crimea. This concern of Russian imperialist expansion of its sphere of influence in Ukraine, however, quickly became overshadowed with the collapse of the Syrian state and the emergence of ISIS. American efforts to resolve the situation by confronting and attempting to remove Bashar al-Assad faced imitations as Russian involvement in the conflict lent support to Assad’s position.

Of course, the picture painted thus far has only been from one perspective. From the Russian point of view, the West has largely treated Russia dismissively since the end of the Cold War. Russians felt pushed to the background as losers in some grander battle over ideals and felt that their recovery and return to strength has been rejected. From Moscow’s perspective, continued Western expansion of NATO is a great cause for concern as the alliance directly threatens Russian security via strategic placement of missiles mere kilometres from Russia’s borders. With Syria, the infamous American instigation of the Iraq war is often credited with causing the power vacuum in the Middle East that allowed ISIS to gain strength. As such, the ready willingness of the United States to oust authoritarian leadership without seemingly considering the consequences of removing said rulers is a great cause for concern for Russia, who uses this case to defend its position in backing the Assad regime.

The result of these conflicting views can be seen clearly in how both countries interact with each other. Following the December attack in San Bernardino, for instance, Obama not-so-subtly excluded Russia from America’s list of allies by saying that “[establishing an international effort to pursue a resolution to the Syrian war] will allow the Syrian people and every country, including our allies, but also countries like Russia, to focus on the common goal of destroying ISIL — a group that threatens us all.” On the other side, Putin has criticized the United States for her involvement in Syria saying, “It is impossible to achieve success in the fight against terror if you use groups of them [terrorists] as a battering ram to take down inconvenient regimes.” The sentiments of Washington and Moscow appear to be mirrored in the general populations of both respective countries. Globally, perceptions of Russia have increasingly become negative, particularly in Europe and the United States. Conversely, popular Russian opinion of the United States is in decline with many placing the United States as one of Russia’s top enemies.

This coldness (for animosity would seem to be too harsh of a word) between the two countries is unproductive. As idealistic as it may be to suggest, cooperation between the two countries should be a target for future relations. Of course, in order for serious cooperation to occur, some attitudes need to change and the onus of action, admittedly, does not lie equally on both parties. Domestic political issues concerning the protection of civil liberties (or lack of thereof) in Russia continue to be a thorn in the side from the perspective of the United States. America cannot unreservedly embrace Russia without receiving some indication of serious intent to improve the domestic situation. At the same time, America needs to offer some indication that past sentiments treating Russia as an enemy are ready to be discarded. Russia’s continual concern that this understanding will not go away anytime soon is only confirmed by efforts to expand NATO. The idea of Russia joining NATO was entertained in the past (both by Russia and by Western countries) but was always rejected. At present, given Moscow’s continuous rhetoric decrying NATO expansion, it is clear that that ship has long since sailed.

Is there a solution to make Russo-American relations more tranquil and ensure a peaceful and mutually-beneficial relationship between the two countries? Unfortunately, the problem is self-perpetuating. Russia needs to stop seeing the West as a major threat, however, this would involve greater Russian involvement in NATO or a reduction of NATO’s scope (a point that the West would be unwilling to compromise) as NATO expansion remains the driving force for Russian sentiments of insecurity. Conversely the West needs to take a charitable perspective of Russia’s position as being less that of an egregious imperialist power hungry to take over the world and more as that of a strengthened nation concerned with real threats to its security. To that extent, Russia needs to show that it is committed to international democratic norms and that it is willing to pursue mutual security in tangent with Western powers. Unfortunately, none of these seem like realizable goals in the remotest sense. The alternative, however, is absolutely undesirable. The Cold War largely ended thanks to open discussion (not only internally, but internationally as well) and excellent diplomacy. Let us hope that open discussion and diplomacy will prevent a second Cold War from becoming a true reality.

John is a U2 student from Montreal doing a double major in Political Science and Philosophy with a minor in Russian Language. He is interested in Central & Eastern European and Post-Soviet Politics, American Politics, and the structure and functionality of democracies and their electoral systems.