Back in Session: Canada’s Progress on Policies and the First Minister’s Meeting 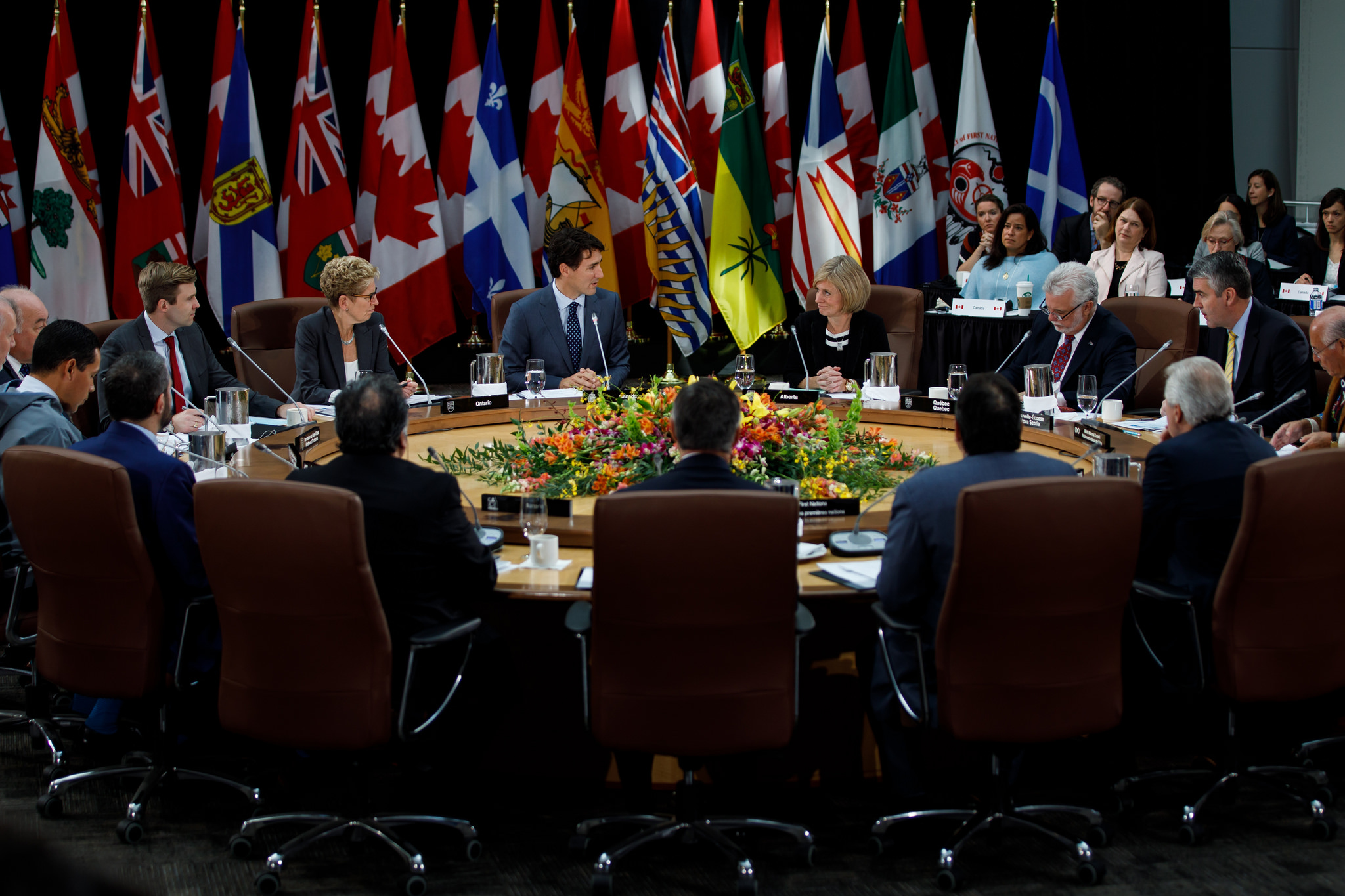 Since Parliament entered summer recess, Prime Minister Justin Trudeau has been busy attending the G7, walking in Pride Parades and going on a European tour. There was truly no shortage of photo opportunities this summer, but the sparkle of Canada’s 150th is long gone and now Parliament is now back in session. The House of Commons resumed September 18th with a handful of changes. The most notable change was from the Liberal government’s cabinet shuffle on August 28th which saw the division of the Ministry of Indigenous and Northern Affairs portfolio into two separate departments.

Minister Carolyn Bennett who held the position before is now the Minister of Crown-Indigenous relations and Northern affairs. The other portfolio, Indigenous services, has been handed to Minister Jane Philpott who leaves the Health portfolio in the hands of Ginette Petitpas Taylor. Another major change that will undoubtedly affect the dynamics of the House are the newly elected party leaders. The Conservatives elected their new leader Andrew Scheer on May 27th. Scheer unveiled his shadow Cabinet on August 30th with the controversial appointment of MP Rachel Harder, who is known to be pro-life to the Committee of the Status of Women. In response, both Liberal and NDP MP’s walked out of the scheduled meeting of the committee, preventing a vote for Harder’s nomination to take place. The committee’s vice chair Liberal MP Pam Damoff asked Scheer to explain and to reconsider his pick. In response, Scheer stated that Harder was chosen as she supported his positive vision of Canada.

Additionally, on October 1st, Jagmeet Singh was elected by the New Democratic Party, taking more than 50% of the votes in the first ballot. The former deputy leader of the Ontario New Democratic Party will be the first person of colour to lead a party in Canada. With 35,266 votes out of the total 65,782 votes cast, he beat out poll favourite Charlie Angus and second-time candidate Niki Ashton. Singh will inherit the party that is 5.5 million in debt. With big shoes to fill and a seat to win in the House of Commons, Singh has a lot of work cut out for him, but it will be exciting to see the change that he will bring to the party and to the House.

Lastly, on October 2nd the 28th Governor General David Johnston was be replaced by Julie Payette after holding the position for five years. Julie Payette will be the fourth female governor general but the first one who has ever been to space. While most Canadians are taught in classes that the role of governor general is to be a “rubber stamp”, prorogation attempts and occurrences from Harper’s Conservative government remind us that the role is still very much relevant. With all these changes in mind we look forward to three policy topics in the context of the First Minister’s Meeting and future legislation in parliamentary session.

The First Ministers Meeting (FMM) was held on October 3rd. The FMM is an annual meeting of provincial and territorial premiers and the Prime Minister. The meeting is a constitutional convention that typically occurs behind closed doors. This year, the FMM’s main focus was on sustainable economic development. The International Monetary Fund is expecting Canada to lead the G7 for economic growth. They expect the rate to rise from 1.9% to 2.5%, their original projection in April. In addition to this, the Bank of Canada interest rates rose twice this year, first in July when the rate was set to 0.75%, followed by the second time in September where rates were raised to 1%. Considering our current decent economic position, a new liberal tax plan was the main thing discussed during the First Minister’s Meeting. The new Liberal-proposed changes to the tax system have come with a lot of backlash. They want to close what have been identified as tax loopholes which include passive investments, capital gains rules around the payment on dividends, and income sprinkling.

The biggest concern that MPs and constituents have over the plan is that closing the loopholes may restrict small business owners and farmers. Conservative Leader Scheer believes that government elimination of the tax loopholes that used to exist for small businesses and individuals are a threat to economic and job creation. The Liberals seek the elimination of tax incentives to uphold their promise to help the middle class out, which was one of their main election promises. While true that the rich should be taxed more in order to benefit the middle class, the Liberals have decided to change their plan after their 75 day consultation period and hope to ensure that their changes make sure that the “system is fair and encourages investment”.

The federal government set up a timeline to achieve marijuana legalization and regulation by next July. It was a main topic of discussion at the FMM as there was a need to coordinate the police training and taxation plans of provinces. Currently provinces and territories are fairly uncoordinated, for example Alberta has the most permissive legislation in regards to marijuana and British Columbia has retail infrastructures in place due to the current number of active dispensaries. The Premiers working group report is due November 1st and at that point they can ask for a formal extension to the ottawa deadline of July 1st. Trudeau proposed a federal excise tax to the FMM stipulating that each gram of marijuana would be subject to a tax of $1 on sales and up to 10% of tax on sales over $10. But Premiers have pushed back on this proposal as the proposed revenue would be divided 50/50 between federal and provinces. Though provinces would be permitted to adjust their own levels of taxation on marijuana, the provinces would still be the ones responsible for regulation and all the work and thus they deemed it unfair that the federal government would still get half the tax revenue. On the topic of pricing, Quebec Premier Philippe Couillard  stated that “if it’s priced too low it will encourage use; if it’s priced too high, it will keep the black market thriving.” Bill C-45, the amendment to the Criminal Code to legalize marijuana, returns to the House of Commons for its third reading scheduled October 23rd.

On September 21st Trudeau spoke at the United Nations General Assembly and acknowledged Canada’s colonial history and current failures of the government to address water advisories and neglect of missing and murdered Indigenous women. It seemed that this speech was directed towards a domestic audience rather than the world stage and offered a positive outlook on federal attempts at reconciliation. At the FMM, Indigenous leaders had a session with Trudeau prior to his meeting with Premiers. Leaders from the Assembly of First Nations (AFN), the Inuit Tapiriit Kanatami, and the Metis National Council were invited. They were the same three indigenous groups that boycotted the annual summer meeting of premiers as they were not invited to be a part of the discussions. The main topic of discussion for the meeting was economic development in Indigenous reserves. Isadore Day, the Ontario regional chief for the AFN stated that “The first ministers meeting is just nothing but words.”

While leaders were hoping to talk about tangible plans, in a Globe and Mail article, Perry Bellegarde, the AFN’s National Chief, said the meeting provided little time to make significant process, showing that the attempts from the government to reconcile seem surface level. Though the announcement on October 5th of a $800 million dollar settlement between the federal government with Indigenous survivors of the 60s scoop has been a long time coming, the government must come through to show that they truly do want to reconcile and that this decision isn’t just performatory reconciliation from the government. Natan Obed, the leader of the Inuit Tapiriit Kanatami said that “I don’t think that, in this time of reconciliation, we have had enough time with premiers and the Prime Minister in a shared space to work through some of the big challenges that we do have.”

At the half way point in their mandate, the Liberal government has not started 65/226 of their election promises and have broken 35 of them, which includes their promise to balance the budget by 2019 and electoral reform. Current NDP leader Thomas Mulcair commented that “You could be forgiven for thinking that because they only got 40 per cent of the vote, the Liberals figure it’s okay if they only respect 40 per cent of their promises,”. Currently 144 Indigenous communities still have water advisories, there has been an increase in migrants crossing Canadian borders, and the opioid crisis is spreading across the country. There is a lot for the Canadian government to do and a lot of promises for the Liberal government to come through on now that Parliament is back in session.