Scotland is a country of just 5 million inhabitants and part of the United Kingdom. Québec is the sole French-speaking territory in North America. The Scots and the Québécois, while different and separated by the Atlantic Ocean, have to deal with the same cleavage, caused by those who dream of sovereignty. Quebec sovereigntists tried twice, led first by René Lévesque, then by Jacques Parizeau and Lucien Bouchard. Failure was the result each time. In 2014, it was Scotland’s turn. The outcome? Exactly like in Quebec. Now Scotland must take a « beau risque » (“beautiful risk”) and try to do what the Québécois tried many times: reconcile its differences with its sovereign state. While the road ahead may be long and unpredictable, a look at La Belle Province can be an interesting way of predicting Scotland’s near future.

May 20th 1980. 34 years go, Quebec Premier René Lévesque stood in front of a crowd at Paul Sauvé Arena, with tears to his eyes, and uttered the words: “If I heard you right, you are telling me: until next time![1]” The Québécois people had spoken: 60% of them had decided to remain a part of Canada. Fifteen years later was the “next time.” The result? 51% NO versus 49% YES. Then-Premier Jacques Parizeau said: “we spit in the palms of our hands and we start over.” And in fact, the Parti Québécois did just that. After electing a minority in 2012, it is fair to assume that, if Pauline Marois’ Péquistes had won a majority in the 2014 election, a referendum would surely be looming. Parizeau said the night of the 1995 referendum that the Québécois would not have to wait another 15 years, as was the case between the first two polls. However, next year will be the twentieth since the last defeat. These days, the Québécois seem to be over sovereignty. Last spring, they elected a Liberal majority, effectively settling the question for at least four years. The PQ suffered its worst defeat in years and is currently rebuilding. Last May, a poll placed it fourth in voter intentions with 19%[2]. Needless to say, the situation looks bleak for sovereignty in Quebec…at least for the time being.

Meanwhile, Scotland held its own referendum. This past September 18th, Scots answered the following question: “Should Scotland be an independent country?[3]” That question is very simple and only six words. In Québec, the questions were 108 and 43 words long in 1980 and 1995 respectively. However, the campaign surrounding Scotland’s question was not as simple as its wording might make it seem. It was long and arduous for both sides. Like the Quebec 1995 campaign, the sovereignist side gained considerably more credibility and support, as the day of the vote got closer. On the eve of both Quebec referendums, the federalist side, because it was afraid of losing, made important promises to the entity seeking separation. In the Scottish case, the United Kingdom’s Prime Minister, David Cameron, made promises to the Scots (and also to Wales, England, Northern Ireland), talking of devolution and “a modern form of Scottish home rule.[4]” Effectively, the UK would, if it follows through with devolution, delegate new powers and grant more autonomy to its territories of Wales, Scotland, Northern Ireland and possibly even England, thus adopting a more federal system, not unlike the one in Canada. While this all seems very promising, not all experts are certain of the outcome. This didn’t prevent ex-Quebec Premier Jean Charest from offering some fairly straight, confident predictions. While on Evan Solomon’s podcast The House on CBC Radio, the man who earned himself the nickname “Captain Canada[5]” for his impassioned pleas for the federalist cause in 1995 made two predictions about the future of Scotland by drawing parallels with the situation his natal province went through some twenty years ago. 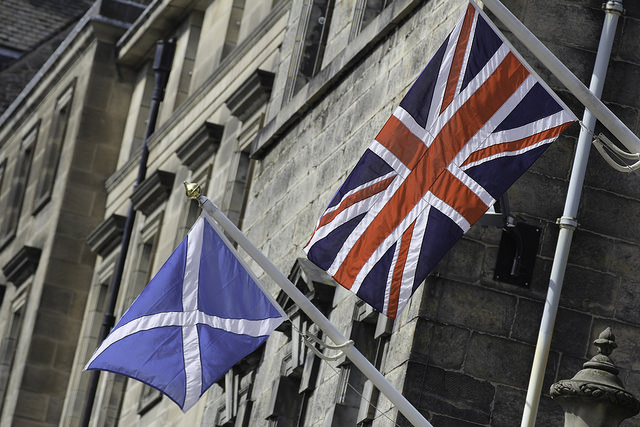 Jean Charest’s first prediction is that another Scottish referendum will be held in about 10 years time. Simply put, he is “totally convinced[6]” that there will be a “next time”, just like René Lévesque and Parizeau did. His prediction is definitely not far-fetched. The referendum result in Scotland, while seen as an easy victory for the No side, still ended with 45% of the population of Scotland voting in favor of sovereignty. What does this mean? It shows that there is a non-negligible minority of the population that would in fact support sovereignty, just like in Quebec back in 1995. That referendum ended with 49% in favor of Yes and 51% voting for No. While the gap was a little wider in Scotland, the fact remains that if the UK government were to fail to fulfill its promises adequately, that 45% could be a powerful base to build towards another referendum. Not only that, it is a safe bet that some voters were hesitant until the last second. It is also likely that they decided to vote “no” in light of the promises made by the “Better Together” campaign. Usually, the last-minute undecided voters “tend to break disproportionately toward the status quo, opting at the last moment not to take a step into the unknown[7]”, explains Éric Grenier in an article on CBC.ca. Alex Salmond, the First Minister of Scotland and leader of the independence movement, targeted the older Scottish voters as being those who preempted the separatist loss. Mr. Salmond said the Scottish voters of his generation were responsible for the “no” side’s victory. Due to their higher age, some of those older generation voters will soon be gone, making sovereignty inevitable. When that happens, they won’t be there to “[impede] progress for the next generation.[8]” Furthermore, in the event of broken promises, some “no” voters (including a part of the older ones who voted “no” in 2014) might eventually decide they’ve had enough of the UK and take the leap of faith in supporting the sovereignist movement. Thus, unlike in Quebec where sovereignty seems to be a fading idea, the movement in Scotland is far from dead.

Charest then goes on to say that, like in Quebec after both referendums, the advocates of the “no” side will be accused of cheating and stealing the referendum win[9]. Alex Salmond did not blame the loss on “money and ethnic votes[10]”, like his Québécois counterpart Jacques Parizeau did in 1995. He did nevertheless sing a very familiar song when he said: “No voters had been “misled” by Westminster.[11]” This shows some bitterness on the side of the current SNP leadership. However, Salmond’s likely successor seems to be willing to work with Westminster officials to get them to fulfill their promises during constitutional and devolution negotiations. Nicola Sturgeon, who is Alex’s Salmond Deputy First Minister, is seen as the front-runner in the race to take over as SNP leader. She gave a warning to the responsible parties in the UK that they will face severe consequences if they do not live up to their promises[12]. One of the contentious issues seems to be the vote to remain in or opt out of the European Union, scheduled for next year in the UK. Scotland is known for favoring membership in the EU. However, the question has been long debated in the UK. If  Scotland was to vote to remain in the EU, but still be forced out of the Union by the rest of the UK population’s votes, the sovereignty movement could be sparked again, leading to another referendum[13]. The European Union question is just one of many issues that will be seminal in shaping the future of Scotland and in determining if and when a second referendum would happen. The Scots also seek “control over income tax, national insurance, corporation tax, capital gains tax, fuel duty, air passenger duty and inheritance tax[14]”, as well as welfare, employment, broadcasting and energy[15]. Needless to say that Mrs. Sturgeon has a hard task to fulfill if she becomes SNP leader.

Finally, the former Quebec Liberal leader said that whatever is offered by the UK’s main parties will be rejected by the Scots, described as a gesture of “betrayal, lying and disloyalty[16]”. It is impossible to deny that negotiations with the UK won’t be easy. In fact, they could go wrong. A look at Québec can show us how. Following the 1980 referendum, Prime Minister Pierre Trudeau repatriated the constitution. The negotiations that followed did little to satisfy the Québécois. Premier René Lévesque had decided to take a “beau risque” and try to bargain with the Canadian government. Him and eight other Premiers (known as the “group of eight[17]”) did not want a Charter of Rights and Freedoms in the new constitution, which was favored by Trudeau. The Charter was to give the Supreme Court the power to nullify provincial legislation that would be judged unconstitutional. They also requested a veto on constitutional amendments. On the night from November 4th to November 5th 1981, then-Minister of Justice Jean Chrétien managed to convince all of the provinces that were part of the group of eight to give up their veto and gave them a “non-withstanding clause[18]” instead, which allows provinces to opt out of some Acts of Canada’s Parliament and articles of the Charter. This was all done behind Lévesque’s back, as he was not present at the meeting. Ever since that day, the Québécois have named that event the “Night of Long Knives”, hinting at betrayal from the other Canadian provinces and the federal government. The frustration caused by that event, followed by the failure of the Meech Lake and Charlottetown Accords, was what paved the way to a second referendum in 1995. Thus, while it might be a little pessimistic of Charest to declare that there is no way Scotland would accept anything that will be offered by the UK, there is in fact a chance that the negotiations will take a wrong turn and reignite the independence movement.

With all that said, Scotland’s  sovereignty movement is still very much alive and the next couple of months/years will be of capital importance. Whether or not Mr. Charest’s predictions become true depends on which of two possible paths Scotland takes. The first is what I would call the Quebec path: constitutional talks are initiated, but fail to satisfy the Scottish nationalists. They feel betrayed and neglected by the UK, which leads to another referendum for sovereignty. The other path is what I call the “beautiful risk” path, which implies that the risk of negotiating with the UK actually pays off and powers are devolved enough to satisfy and calm the sovereignty movement. Based on Sturgeon’s declarations, it seems Scotland might be willing to go down the latter path. The ball is now in Westminster’s court.

[6] CBC Radio,. 2014. ‘Chrétien And Charest Reflect On The Results Of Scottish Referendum’. Podcast. The House.