Bernie – A Better Candidate in Hindsight 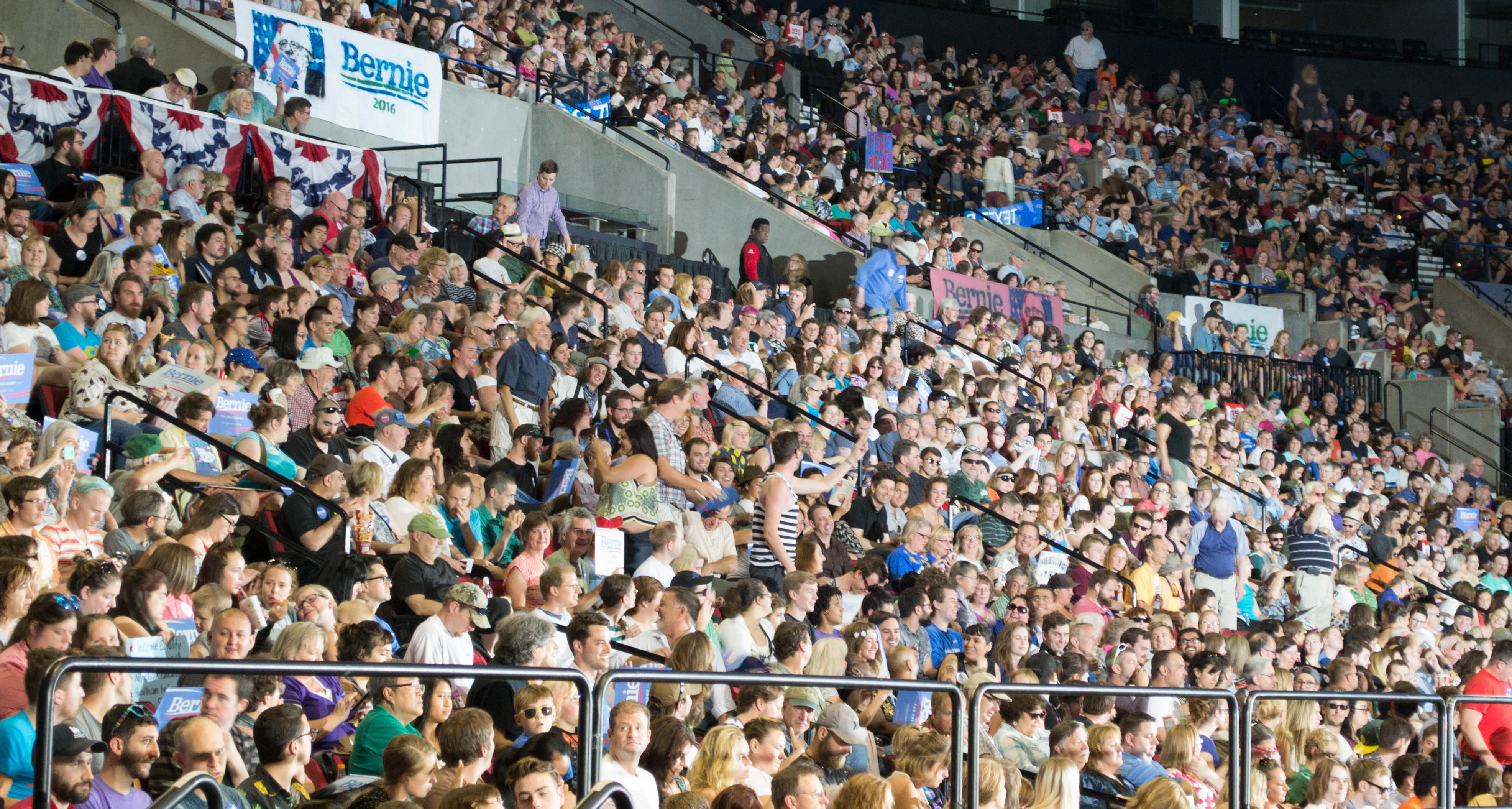 On November 8th, Democrats suffered perhaps the most harrowing loss of this generation. Gaffe after gaffe from Donald Trump had instilled in many, including the campaign of Hillary Clinton, a strikingly high level of optimism going into Tuesday. Everything pointed to her victory on November 8th. The Huffington Post polling average showed a 5.3% lead for Clinton on election night. By any means, this appeared to be a comfortable margin, especially considering that in 2012 Obama won a 332-206 electoral college victory with a 3.9% margin. America’s top political experts, including University of Virginia’s Larry Sabato, predicted a large Clinton victory. The political establishment, composed mainly of technocratic politicians, media pundits, and business leaders, felt assuredly confident that Clinton would win. Within insider circles, the results on November 8th were considered a done deal.

When November 8th did arrive, the results surprised almost every observer. Donald Trump finished with 306 electoral votes to Clinton’s 228, winning important swing states like Michigan, Pennsylvania, Wisconsin, Iowa, and Ohio. The establishment reeled in shock. Clinton’s seemingly stellar campaign had gone down in flames despite every sign to the contrary, leaving many on the left particularly incensed.

Progressive Democrats are now left pondering whether or not Bernie Sanders could have performed better against Donald Trump than Hillary Clinton did. Many left-leaning Democrats are seething with rage at the centrist Democratic establishment because they believe they had provided a credible alternative to Clinton, a candidate who was incorrectly assumed to be nearly flawless in establishment circles. This battle now shifts to the Democratic National Committee, where a heated leadership race is unfolding, but which has deep roots in the Democratic primary process.

To properly comprehend the surge of left-wing discontent within the Democratic Party, one must travel back to July, after the primary race’s completion. Wikileaks had just released a batch of hacked emails obtained from the Democratic National Committee (DNC), which revealed a vast web of DNC favouritism towards Clinton during the primary. Sanders’ supporters called for Congresswoman Debbie Wasserman Schultz, chair of the DNC at the time, to resign in the wake of these damaging accusations, which she did, stepping down on July 25th. Donna Brazile, a CNN analyst and vice-chair of the DNC, took the reins after Wasserman Schultz’s departure. However, additional leaked emails revealed that Brazile had similarly shown Clinton unjust favouritism by leaking debate questions to the candidate.

While evidence that these backroom dealings destroyed Sanders’ campaign is lacking considering he lost by nearly 1000 delegates, they demonstrate the DNC’s propensity to write off the Democratic Party’s progressive wing. Much of the DNC’s actions were predicated on the fact that Clinton has been part of the Democratic establishment for years. She was seen as experienced, respectable, and pragmatic as opposed to Sanders, who fought against the establishment and called for a political revolution. The party chose to prefer a candidate who did not battle entrenched interests, perhaps because they believed that this was a winning strategy, especially for undecided moderate voters put off by Trump.

However, there is merit to the idea that Hillary Clinton was a weaker general election candidate than Bernie Sanders.

First, there is a massive perception gap between Clinton and Sanders among the public. Clinton has fallen prey to a number of scandals over the years, from scrutiny over attacks on the American embassy in Libya to her mishandling of classified material on a private email server. Many of these examples —most notably Benghazi— were politicized attacks from the Republican Party. Even a Republican Congressman on the Benghazi committee admitted that the proceedings were meant to damage Clinton’s shot at the White house. Legitimate or not, these scandals undoubtedly left a negative impact on Clinton’s standing with the public, eroding trust in her. Since the beginning of 2016, Clinton’s net approval rating hovered between -10% and -15%. She scored even lower on important traits like honesty, with an October poll showing only 33% of Americans viewing her as honest. Analysts even noted that her ratings on honesty declined as more and more scandals emerged during the campaign.

On the other hand, Sanders remained untarnished by scandals and was viewed far more positively than Clinton nationally. The same polling average referenced above showed Bernie Sanders with a net approval rating ranging between +10% and +18%. Moreover, a poll from April shows that while 48% of voters saw Clinton as having the integrity to serve, 70% saw Sanders as honest enough to be president. Being seen in a favorable light is especially important in presidential races among undecided voters, who often break for a candidate based on perception of personal attributes.

Secondly, on policy issues, Sanders was primed to secure the support of the very voters that decided the election. Clinton’s biggest losses as compared to Obama were of white working-class voters. Looking at the results, Trump gained largely among these voters, winning counties by large margins that Obama had carried just four years ago. Electorally vital states like Michigan, Ohio, Pennsylvania, and Wisconsin have high proportions of blue collar white voters who swung to Trump. One particularly egregious example of Clinton’s losses among this constituency is in Lackawanna County, PA, best known for being home to steel town Scranton.

Results show that while Obama won 63.1% of the vote in this county in 2012, Clinton won just 50.2%. This pattern repeated itself all over the Rust Belt, where trade policies over the last few decades have led to massive outsourcing, factory closures, and general economic anxiety. White Rust Belt voters largely supported Trump’s anti-globalist, anti-free-trade agenda. Clinton, on the other hand, stood for exactly the opposite, specifically proclaiming that “My dream is a hemispheric common market, with open trade and open borders” in an private speech uncovered by Wikileaks. Moreover, Hillary Clinton flip-flopped numerous times on whether or not she supported the Trans-Pacific Partnership (TPP), eventually settling on opposing the deal. However, many voters worried about this seeming inconsistency, despite her repeated assertions of opposition to the TPP late in the race. Sanders, on the other hand, consistently and vociferously opposed the TPP throughout his campaign. This stance likely would have played better among Rust Belt voters concerned about the job losses stemming from free trade policies.

In addition to these promoting trade policies favourable to Rust Belt voters, Sanders also espoused a set of populist ideas, ranging from free healthcare to tirades against Wall Street speculators, which similarly would have appealed to some Trump voters. Much of his platform centred around addressing economic anxieties, which, as mentioned before, permeated the climate of many swing states. Sanders’ no-holds-barred populism held greater sway among crucial white Rust Belt voters than Clinton’s policy-focused, pragmatic approach. In Michigan and Wisconsin, Sanders won white voters without a college degree by 15% and 18%, respectively. In the general election, Michigan’s non-college whites picked Trump over Clinton by a 31% margin while Wisconsin’s preferred Trump by a 28% margin.

Various indicators demonstrate that Sanders’ populist ideas would have been much better suited to undercut Donald Trump’s support than Clinton’s plans. In mid-May, as the primary season began to wrap up, polls were consistently showing Sanders outperforming Clinton in swing state match-ups against Trump, presumably owing in no small part to his policy differences and more positive public perception. The Democratic establishment, however, persisted with their favouritism towards Clinton, disregarding the magnitude of her polling deficit as compared to Sanders’. This discrepancy points to a vastly different outcome in November with a Sanders-led ticket.

While the United States still grapples with the reality of calling Donald Trump “president-elect”, progressive Democrats correctly recognize that Sanders’ positive populism would have been better poised to defeat Trump than Hillary’s technocratic outlook. The arrogance of party elites who intentionally disadvantaged Sanders while overlooking Clinton’s glaring faults has come back to haunt them and the millions of Americans who will suffer under a Trump presidency.