Betsy DeVos and the Uncertainty of America’s Public Education System 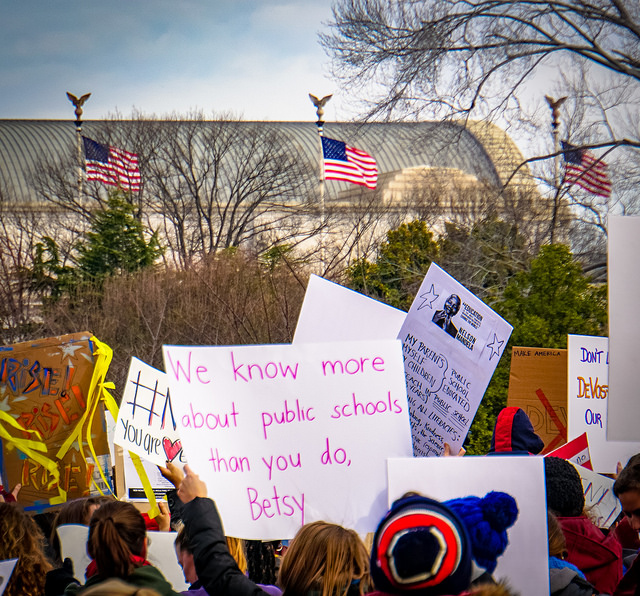 Starting two weeks before his inauguration on January 20, 2017, President Donald Trump’s numerous cabinet picks underwent Senate confirmation hearings. With Republicans controlling the Senate, Democrats have grilled nominees in hopes that a few Republican senators may in fact vote against the president’s nominees and to ultimately block their nomination. Top cabinet positions often come under the most examination from the Senate, and President Trump’s picks have not fared differently, as Senate Democrats have fiercely interrogated Secretary of State nominee Rex Tillerson and Attorney General nominee Jeff Sessions. While the majority of Senate Democrats will not vote for either of these two controversial nominees, there has been another nominee who has taken the brunt of the Democrats’ assault. Secretary of Education nominee Betsy DeVos, who is seeking a cabinet position with much less flare than the aforementioned ones, has come under immense scrutiny for her past political contributions, her lack of experience, and her decades of fighting the ideals of public education.

DeVos’ appearance in front of the Senate Health, Education, Labor and Pensions Committee on January 17 was heavily lambasted by news media and Democrats alike. The media jumped on multiple of DeVos’ responses to questions asked by Senators. The media reported extensively on DeVos’ odd response to Senator Chris Murphy’s question regarding the place of guns in American schools, in which she cited the need for guns in order to protect schools from grizzly bears in Wyoming. DeVos also did not seem to comprehend Senator Al Franken’s question regarding the proficiency versus growth debate within education policy. To add to the blunders, DeVos demonstrated her unfamiliarity with The Individuals with Disabilities Education Act while being questioned by Senator Tim Kaine. While DeVos’ hearing produced cringeworthy highlights, which the media and Democrats have jumped on in order to prove that she is unfit for the position, it more importantly demonstrated the radical changes she would propose making to public education. What must scare her opponents the most are the profound changes DeVos has spearheaded in her home state of Michigan and her plans to increasingly privatize the school system and to ultimately dismantle the ideals of public education.

DeVos has been one of the county’s most engaged advocates for school choice and the charter school movement since the 1990s. As chairwoman of the Michigan Republican Party, DeVos spent two million dollars of her own family’s money on a failed school-voucher referendum in 2000. She has also been a board member of numerous pro-school choice and pro-school voucher organizations and lobbies, including Children First America, the American Education Reform Council and the American Federation for Children. In addition to being one of the country’s most notable supporters of increased charter schools, she has also taken the debate one step further by advocating for less government oversight in charter schools. Over the past two decades, the DeVos family has contributed $1.4 million in Michigan to prevent increased oversight for charter schools. Although DeVos may have not be the face of the school choice movement, like Trump’s other Secretary of Education considerations Michelle Rhee and Eva Moskowitz, her millions of dollars used for school choice initiatives in Michigan and her lack of experience working within the education system must make Democrats wary of her nomination and what the future of public education may look like. While opposing her nomination may be difficult, Senate Democrats must not focus on her lapses during the hearing but rather on what her past and her values mean for the state of American public education if they wish to defeat her.

DeVos’ past clearly demonstrates her prospective goals should she be confirmed. For starters, DeVos seems willing to enact President Trump’s $20 billion school voucher program to increase school choice. Although neither Trump nor DeVos has commented on where money for this federally funded school voucher program will come from, there is no reason to believe that DeVos, as Secretary of Education, would not present a similar proposal. Additionally, DeVos’ deep-seated belief in the necessity of unregulated charter schools demonstrates what she will set out to accomplish. Frankly, just as in the public system, there are some charter schools which have been successful in regards to test scores and college acceptance rates while others have failed. In Detroit, a city in which DeVos has spent millions of dollars championing charter schools, the Detroit Free Press found that academic results in charter schools as a whole were comparable to those of public schools. The report also found that the Detroit charter school initiative, one of the least regulated in the country, was administered primarily by for-profit companies that do not need to disclose finances like their public counterparts. While DeVos clearly believes in the benefits of charter schools, it has been difficult to prove that these schools will be as successful on a macro level. As one of the most prominent supporters of the charter school movement, and from her answers at the Senate confirmation hearing, Devos shows how radical her plan as Secretary of Education would be in increasing the privatization of the public education system.

DeVos’ decades-long fight to promote school choice in her home state –with minimal success– and her ongoing belief that these initiatives are the answers to the woes of the public education system alone make her unsuitable for the position of Secretary of Education. In any other position, the cabinet nominee must demonstrate that he or she has policy ideas that will improve the overall situation under their jurisdiction in order to gain the confidence of the Senate and the American public. Not only has DeVos been unable to do so, but she has demonstrated her wishes to dismantle the roots of the American public education system and enact a federally funded system of unregulated, for-profit schools which have yet to demonstrate any clear-cut improvement to primary and secondary education. There is undoubtedly a need to fundamentally improve the public education system in the United States, as too many children, especially those who are marginalized, do not have access to a quality education. However, a complete disregard for the system itself is not the way forward, nor is dismantling the base of the education system. Senate Democrats may have felt Devos’ lackluster performance during her hearing proves that she is unfit for the position of Secretary of Education. However, while her knowledge about the public education system does seem to be lacking, what must frighten Americans most is DeVos’ devotion to the privatization of the public education system through school choice policies, vouchers, and increased charter schools. While it would be difficult to argue that DeVos does not want the best for America’s children, the reality is that school choice will not be the savior of the education system and its nearly 100,000 public schools. Senate Democrats, along with public school teachers and those who oppose DeVos’ nomination, must thus present their argument as a battle against the privatization of a public good and against the utter demise of the current education system, in hopes of either defeating her or at least curbing her future actions.