Beyond the Legislature: Female Representation at Home and Abroad 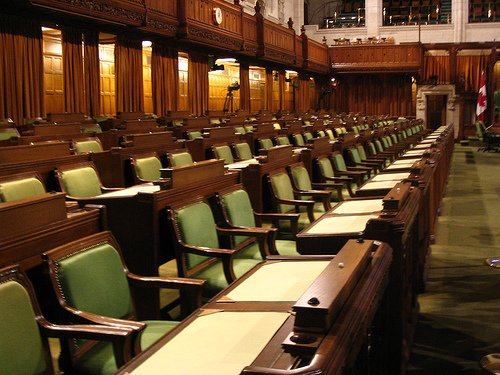 In the past 16 months, Canada has held six provincial/territorial elections in the provinces of British Columbia, Nova Scotia, Ontario, Quebec and New Brunswick as well as the territory of Nunavut. These elections resulted in two female Premiers and some of the highest female representation ratios in the country. Provincial female representation levels vary, with Nunavut’s legislative assembly comprises of 19 members, three of whom are women (15.7%), while British Columbia has the highest men-women ratio in the country, with 31 women out of 85 members(36.5%).

New Brunswick’s September 2014 election resulted in the election of 8 women in 49 ridings. In 2010, the province also elected 8 women, this time in 55 ridings; so while the percentage of women has gone up very slightly, there has been no change in terms of female representation. New Brunswick remains one of the only four provinces yet to have a female Premier. Numbers like that may cause the politically inclined to raise an eyebrow. How is it that this province can continue to under-elect women? According to one of these female members of the Legislative Assembly, it isn’t due to a lack of trying.

New Brunswick Progressive Conservative MLA Dorothy Shephard was re-elected in the 2014 election and previously served as the Minister of Healthy and Inclusive Communities in the 2010 PC government. According to Shephard, “all parties are making an effort to engage women in the political process.”[1] Despite this, the major parties ran an average of 13-19 women in the 49 ridings. She suggests that the internal nomination process could be one of the contributing factors to the low percentage of candidates.[2] It would appear that the biggest issue at hand is getting women involved from a grassroots level and encouraging them to enter the nomination process.

“The only way to encourage more women to get involved is for the conversation to remain prominent every single day…at the first spark of interest [we] need to encourage, advise and support the individual.”[3]

When asked about her time in government, Shephard said that she has not felt any negative impact or lack of respect because of gender. In fact, she felt wholeheartedly supported by her caucus and her Premier.[4] While her experience has been mostly positive and unimpacted by gender, she has noted some instances of gender biased comments towards other candidates. The idea that there is a lingering, though perhaps unintentional, attitudinal gender inequality is something that Ontario Premier Kathleen Wynne has addressed. The first female Premier of Ontario has addressed suggestions from her peers that she will not be able to make tough decisions: “one of the myths I’m dealing with right now…is the idea that a female leader can’t make a forceful, positive impact as steward of the economy.” Speaking at a function for Equal Voice, she touched on the advice, which she called “noise,” that many candidates are given, particularly her advice to change ridings because of her demographic; “if we want more woman candidates we need to drown out that noise.”

Federal representation – Canada and beyond

While provincial representation still leaves much to be desired, many provinces are still boasting higher female representation levels than the federal government. At the federal level, women occupy just 25.1% of parliamentary seats and 32% of ministerial positions. The 2011 election resulted in an increase of seven female MPs from 2008, giving a total of 76 women elected out of 309 seats. While this is notable progress, is still leaves much to be desired. For example, 40 of these women came from the New Democratic Party, meaning that the remaining four parties collectively had only 39 women elected. The 2011 election was also the first time a female party leader, Elizabeth May of the Green Party, had sat in the House of Commons since Alexa McDonough led the New Democrats in 2003. While barely reaching a quarter is a step in the right direction, Canada still has a long road ahead.

While the 2011 federal election saw an increase in female candidates, Canada remains only 55th in the world in regards to female representation in elected office. Globally, women still hold only 21.9% of all elected parliamentary seats. Currently leading the world with the highest percentage of women in government, Rwanda boasts a staggering 53 women out of a total of 80 seats (66.25%), while Andorra follows in the second spot, sporting an equal 14 of its 28 seats (50%). 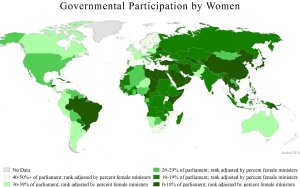 Rwanda may seem an unlikely contender, but in twenty years that have followed the 1994 genocide, Rwanda has made significant steps towards rebuilding their country in a model of equality. Rwanda is one of many countries that has quotas or reserved seats for women. Their 80 seats are allocated as follows: 53 seats are directly elected from a closed list proportional representation system in which there is a 30% minimum quota for women. The remaining 27 seats are indirectly elected; women are geographically elected to 24 of these seats, 2 of these seats are elected by the national youth council, and the final seat is elected by the federation of the disabled. In any given election, this would result in a minimum of 40 seats for women – or a goal of equal representation.

Unlike Rwanda, Andorra does not have a quota in place. Yet, Andorra has still managed to elect an equal number of men and women. The Andorran electoral system operates as follows: two general councillors are elected from each of seven parishes and the remaining fourteen councillors are elected from a national list using the largest remainder method of proportional representation.[5] While Andorra and Rwanda’s electoral systems differ, what they have in common is one form or another of proportional representation combined with geographically based electorates. Canada’s political leaders and mentors could stand to learn from countries like Rwanda. Rwanda’s success cannot be attributed simply to quotas, though it clearly gave the system a well-needed push. Rwandan women have been appointed and elected to a variety of public positions and have ultimately been so successful in their mobilization that they may no longer need these quotas to maintain strong female representation.

While Canada has not experienced anything close to the traumatic events of 1994, the ways in which women took charge to rebuild their country and its political institutions proves that there are no excuses for not promoting female representation. If near parity can be reached in a variety of countries across the world, from post-conflict Rwanda, to Sweden and the Seychelles sitting just below parity at 43%, to the lush valleys of Andorra at full equality, then it is time to stop being content at 25.1%.

The Nova Scotia Legislature Members of the Legislative Assembly http://nslegislature.ca/index.php/people/members/

Paperny, Anna Mehler Voters send a record 76 women to Parliament – most of them NDP 3 May 2011 http://www.theglobeandmail.com/news/politics/voters-send-a-record-76-women-to-parliament—most-of-them-ndp/article585462/