Bhutan and the Paradox of Happiness 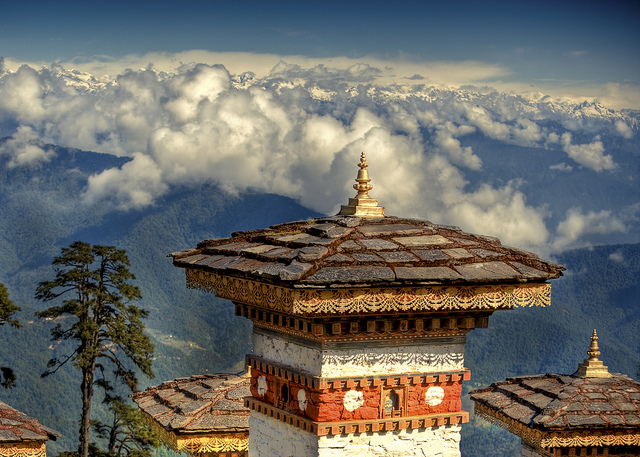 Perhaps no state of being is more sought after than happiness. Many see it as proof of human flourishing and the ultimate goal of living. Happiness has proven to bring health benefits, deter crime, and increase productivity. This pursuit of happiness has clearly bled into the fabric of society, to the extent that the United States even enshrined it in their Declaration of Independence. But happiness is not just an American pursuit; any government that maximizes happiness is likely to assure both its own political success and the welfare of its citizens. If happiness is a government’s goal, it must choose to measure its economic success in relation to it.

However, despite humanity’s relentless yearning to be happy, there remains a recurring phenomenon — well documented across several academic disciplines from philosophy to psychology — that speaks to the inherent futility of the chase: the paradox of happiness. This paradox asserts that, when individuals or groups actively pursue happiness as the singular ultimate goal, the inescapable result is, ironically, increased unhappiness. While this paradox may at first seem puzzling, evidence of its validity is easy to see, particularly in western culture.

In the West, happiness is often conflated with economic success, and the pursuit of happiness often manifests itself as materialism. That the acquisition of abundant wealth is upheld as the pinnacle of success helps explain our fascination with the wealthy. And yet, as predicted by the paradox, personal materialist pursuit proves hollow. Studies show that, after reaching a level of relative wealth — around $95,000 per year — individuals do not become happier as their wealth increases.

Western economic models also reflect a materialist assumption of well-being. Gross Domestic Product (GDP), a measurement made by assigning monetary value to goods and services produced within a country, has long been the prevailing statistic to measure a country’s success. However, GDP is often critiqued as being an ill-conceived metric of human flourishing. It overemphasizes material production and ignores other forms of well-being, such as art, bodily health, and a functional environment. And just as individuals cannot seem to buy happiness, neither, it seems, can countries. In the United States, while GDP has consistently risen, Americans themselves are chronically and increasingly rated as unhappy. Depression rates have skyrocketed and overall life satisfaction has fallen by 6% since 2007.

Perhaps propelled by disillusionment, progressive economists have begun looking for more multifaceted metrics to measure success. Eyes have turned to the small Buddhist country of Bhutan, which appears to have established both the economic and social guidelines necessary to maximize happiness.

Bhutan is unique. Located between India and China, it has long resisted globalization, and, as a result, is one of last traditional Buddhist countries in the world. Traditionally a monarchy, it only recently democratized and opened up to technological advancements as well as tourism. What is perhaps most unique about Bhutan, however, is how their economic system’s primary measurement was designed to counter the pitfalls of GDP.

Preliminary evidence shows some effectiveness to this approach. According to Bhutan’s own Gross National Happiness Centre data, from 2010 to 2015, subjective happiness across Bhutan’s population has increased, unemployment is low, and income per capita has been consistently growing. Bhutan is also one of the few carbon negative countries in the world and one of the few countries in the area with universal clean drinking water.  Its unusual metric of success has created keen interest in economists, NGOs, and even the United Nations, and the combination of its unique culture and its beautiful landscape has led to a flurry of high-priced tourism,

On closer inspection, however, the idealistic vision of Bhutan as a mysterious kingdom devoid of internal strife proves to be little more than a figment of the western imagination and clever Bhutanese marketing. When examining the 2018 World Happiness Report, a multifaceted approach to well-being economics, Bhutan only ranks 97th in terms of global happiness. How could this be the case? Not only do poverty, crime, and mental health issues remain prevalent in Bhutan, but the country also keeps an egregious secret: ethnic cleansing.

In 1989, in response to the growing population of Lhotshampas, a Nepalese, Hindu minority group in Bhutan, the Kingdom initiated the “One Nation, One People” policy. This policy called for the enforcement of Driglam Namza, a cultural mandate that dictated the strict adherence to traditional Tibetan dress and behaviour. The Nepali language was also abolished in the Bhutanese schooling system, and the barometers of citizenship were redesigned on census forms such that Lhotshampas would be labeled as illegal immigrants.

After facing backlash from the Lhotshampa, the Bhutanese government began the forced expulsion of 80,000 to 100,000 Lhotshampas, requiring them to relocate first to India and then on to the Nepal border. The Lhotshampas weren’t accepted or granted work visas by Nepal, and they were essentially stateless, existing solely in UN refugee camps for two decades.

This ethnic cleansing is not well known, despite it resulting in meaningless arrests, tortures, and disappearances. While there still exists a large population of Lhotshampas in Bhutan, their strict conformity to the national attire, language, and culture is required. Bhutanese refugees, many of whom were expelled to the United States, are barred from returning to Bhutan to this day.

King Dorji Wangmo Wangchuck has escaped widespread criticism of this inhumane act. This is likely because of his simultaneous instigation of the novel Gross National Happiness plan. Over time, the GNH’s benefits — at least for the Buddhist Bhutanese population — have seemingly overshadowed the ethnic atrocity in the public consciousness.

Despite being utterly divorced from the reality of well-being for non-Buddhists, GNH has not only provided cover, but also justification for the acts of inhumanity by the Bhutanese government. Adherence to the fourth pillar — the preservation and promotion of Bhutanese culture — assumes a purely Buddhist population. In essence, that pillar provided a justification for ethnic cleansing.

These human rights abuses clearly exemplify how Bhutan fell victim to the paradox of happiness. By aggressively pursuing their definition of happiness — one that is plagued by cultural biases — the Bhutanese government drove Lhotshampas into a state of extreme unhappiness. While it may be an effective metric for measuring the happiness of the Buddhist population of Bhutan, their measurement of a universal human emotion became fundamentally exclusionary.

Overall, while GNH could be more accurate at tracking human flourishing than GDP, it is an equally absurd measurement. While happiness is clearly a universal human state, it remains a subjective experience. Inevitably, any unified metric of happiness will incorporate the goals and biases of its creator, whether that be vapid materialism or a strict conformity to doctrine.

Both GNH and GDP have the same shortcoming: the broad generalization of what constitutes happiness paired with the cultural implications of its pursuit. These do not represent happiness for the vast majority of society, and this leads to increased unhappiness in those communities. Even when attempting to quantify happiness itself into sophisticated economic systems, the paradox of happiness remains.

It is important to note that the paradox does not imply that happiness is an impossible state. It is only the pursuit of happiness for the sake of happiness that is ineffective. Pursuing objectives for their own sake, rather than as a means to achieve happiness, is ultimately more effective in achieving happiness. Politically, happiness exists as a by-product of, rather than the objective of, good governance. Alternative strides towards a robust healthcare system, decreased income inequality, or any other metric that has tangibly shown to increase human flourishing are the way forward.

Featured image: “Bhutan – DochuLa Pass” by Göran Höglund is licensed under CC by 2.0