Blame the Gays: A Brief History of Queer-Mongering 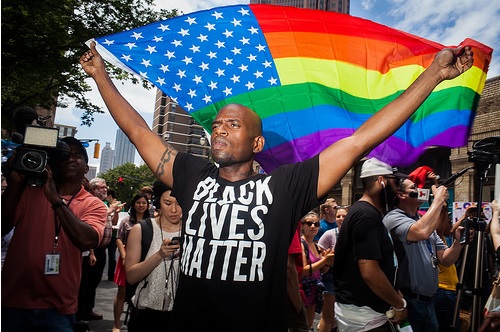 The French idiom ‘avoir un coup de foudre’ describes the connection of love as being struck by lightning. While many heterosexuals have experienced this jolt of ecstasy, few people are aware of the continental ruptures that energize gay relationships.

Indeed, according to New Zealand Bishop Brian Tamaki, the country’s earthquakes of 2011 were the result of homosexuality. Mr. Tamaki defends his theological viewpoint: “Leviticus says that the earth convulses under the weight of certain human sin.” While the mainstream public credits the gays for Warhol’s soup cans and the music of West Side Story, very few people are aware of homosexuality’s necromantic influence on the climate. Beyond tectonic tremors, it appears that homosexuals wield the magnetism to summon hurricanes and even mass animal deaths. In March 2011, the Evangelical Minister Rick Joyner  attributed the Hurricane Katrina to the New Orleans Pride Parade. That same year, Cindy Jacobs of Generals International linked birds falling from the sky and dead fish washing belly up with the military admitting openly gay and lesbian troops.

As a gay man, it is exhilarating to imagine that while I crunch on Frosted Flakes in the morning, the forces of my sexuality are churning ocean winds and fracturing the earth’s foundation. Of course, every seismologist or environmental expert would disprove these homophobic imaginations, yet scientific facts no longer seem to matter. While these sort of radical theories have existed on the fringes for many years, they are becoming increasingly normalized. In the post-truth era of President-Elect Donald Trump, minorities are scapegoated without evidence while experts are shouted down by the cries of “elitism.” The Vice President-elect of the United States, Mike Pence, believes that gay children can be forcibly converted to heterosexuality. He supports conversion therapy despite overwhelming research from psychologists that prove it is not only ineffective, but dangerous. Even if we accept the ludicrous assumption that being LGBTQ is a disorder, the use of electroconvulsive therapy to alter an individual’s sexual orientation can only be traumatic, not curative. What calamity or horror can’t gay people be blamed for? Of course, the scapegoating of minorities, sexual or otherwise, is a time-honoured tradition, and the blame cannot entirely be laid at the feet of Trump and his cohorts.

The public’s suspicion of queer bodies has long been adapted to the social anxieties of the day. In the 1950s, when McCarthyism swept through the United States, gay men were classified as agents of the Soviet Union. How Stalin managed to tap into the closets of homosexuals, where most gay men were confined, is beyond comprehension, yet indicative of how mainstream paranoia around gay people has curiously evolved over time. Although the Red Scare gripped Canada to a lesser extent, the RCMP still took actions on an institutional level to weed out any clandestine Homo-Soviets. A memo for the Canadian Security Panel in 1959 describes how the “character weakness” of homosexuals “left gay men and lesbians open to blackmail by Soviet agents.” The memo explains how homosexuals were designated as a “national security threat” because of their “instability, willing self-deceit and defiance towards society” which, aligned with communism, could undermine Canadian society.

While these theories seem absurd, actual scientific methods were constructed to support them. In the Cold War, so called “fruit machines” were developed as a litmus test by the RCMP to detect who in the civil services possessed rainbow tendencies. These “fruit machines” would measure the interrogated subject’s pupil dilation and pulse as they were exposed to homoerotic images. This method of pathologizing ‘deviant’ sexualities demonstrates the lunacy of homophobia and its abhorrent consequences. As a result of this cataloguing of physiological responses, the Canadian government compiled over 9,000 names of “suspected homosexuals” in the Ottawa area, leading to the firing of hundreds of civil servants.

Today, the disquietude around Soviet aggression has been replaced by the more generalized fear of economic insecurity. Just as social anxieties have shifted, so too have the crimes of which queers are apparently culpable. Former Republican Speaker Newt Grinch blamed the 2008 economic crisis on the “moral breakdown” that resulted from the “redefinition of marriage” beyond its heteronormative confines. In other words, the moral weight of marriage equality collapsed the housing market and capsized the financial sector.

Rather than admitting to the failures of Wall Street deregulation or environmental policies, we can conveniently blame the gays. If we compile a historical list, it is baffling to realize all the things sexual minorities have accomplished: from Soviet expansion, to Hurricane Katrina, to the Great Recession. Under Trump’s administration, the misfortunes for which gays can be credited has the potential to mushroom at an unprecedented rate. The ultra-right conservatives, who have condemned homosexuals from the margins of political society for decades, will soon hold colossal influence in the Oval Office. Donald Trump’s appointment of Jeff Sessions as Attorney General was commented on by the Human Rights Campaign: “It is deeply disturbing that Jeff Sessions, who has such clear animus against so many Americans — including the LGBTQ community, women and people of color — could be charged with running the very system of justice designed to protect them.” History suggests that gay people will continue to be blamed for countless national troubles, but what’s uncertain with a Trump administration is whether these accusations will result in convictions.

This uncertainty is frightening. Since Donald Trump’s election victory, many suicide support groups for LGBTQ people have reported record numbers of distressed calls. Time will tell whether the new administration will legitimate alt-right homophobic conspiracies and herald dangerous times for LGBTQ people. What we can take comfort in, as we’ve seen from impassioned protests across North America, is the knowledge that the LGBTQ community is supported by broad coalitions. Indeed, if we are to blame the queers for something, it is courageously strutting forward despite relentless opposition. Progress isn’t always linear, but if the attitudes of millennials suggest anything, it’s that Martin Luther King Jr. was correct in saying that the arc of the moral universe surely bends toward justice.

I hate to break it to Trump and his “basket of deplorables” but gay people cannot summon earthquakes or hurricanes, although it would be foolish to underestimate our power. The voices of minorities will continue to thunder across campuses and through the streets. Together, with the solidarity of our allies, we will shake the world, so that the waves of social justice persevere. You will know that we are here. The rainbow comes after the storm. The future is bright.