The Bolivarian Regime: Clinging to its Last Hopes of Power 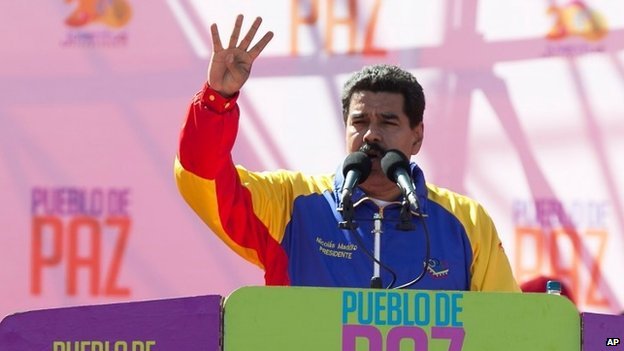 Venezuela’s financial situation has worsened even further; in 2016, the economy has shrunk by 10% and inflation rose to 475%, severely diminishing the purchasing power of the average citizen. Hardship is rampant throughout Venezuela, and citizens are concerned with meeting their basic needs for survival. The crumbling strength of the state and the paralysis of almost all of its institutions suggests a fundamental inability to rectify this situation, which is reflect in the public approval of President Nicolás Maduro; 80% of Venezuelans desired Maduro’s departure in 2016. The Venezuelan President has failed to demonstrate any leadership in combating these issues and with this crisis worsening, his control over the military weakening, and regional condemnation pouring in, he is speeding down the path of political doom. Specifically, Maduro’s decimation of the opposition, the increased corruption present within the military,  his failed economic policies and his volatile control over the military all coalesce to paint a bleak political trajectory.

In the words of Simón Bolívar, a figure of liberation of Latin Americans, “He who leads must listen even to the hardest truths”. It is clear that Maduro has not internalized these words of wisdom. Amid the worsening economic crisis, Maduro has sacked the head of the central bank, after doing such in 2013. Maduro appears ignorant to the fact that constant shuffling of key positions is not the panacea for convoluted political and economic crises. This intransigent political manoeuvring on the part of Maduro extends to other facets of his regime; his control over the electoral commission and the supreme court serves to attack any attempt to hold a referendum regarding his removal. The fact that Maduro has sacked his former Vice President Aristóbulo Istúriz, who was a political moderate with Tareck El Aissami, a hardliner, reinforces his stubborn attitude towards negotiations with the opposition. Aissami, once appointed, directed the arrest of Gilber Caro, an opposition politician; this is testimony to the fact that Venezuelan politicians, rather than representing the interests of their constituents, are directing their power to decimate the opposition. It is therefore evident that Maduro’s cabinet is reinforcing a culture of non-participation and claiming a monopoly over political power as a response to internal criticism. Last year, Venezuela’s homicide rate stood at 58 per 100,000 compared to 4 per 100,000 in the United States.

Maduro and his political affiliates appear to be prioritizing the centralization of power and demobilization of the opposition while citizens suffer the consequences of a devalued currency and economic stringency. In 2014, one US dollar equated to 100 bolivars compared to one dollars equating to 1, 262 bolivars today, resulting in the introduction of new banknotes.  Maduro has sought to introduce banknotes worth up to 20, 000 bolivars to address the problem of hoarders. This proposal and its execution is tragic at best; the problem of hoarders is virtually non-existent given that the bolivar is one of the world’s fasting depreciating currencies. Some reference the Colombian Mafia to be the genuine target of this currency policy, as they use bolivars to buy cheap food in Venezuela and smuggle it across the border, to sell at exorbitant prices. Furthermore, Venezuelans were assigned a deadline to deposit the old notes, however, as peopled queued for days to return their old notes, the new bank notes were not distributed. The state is destroying its own legitimacy as deplorable actions such as delaying the distribution of vital currency notes results in reduced trust in its capacity to govern. It is within this context that civil society turns to alternative methods of survival such as drug trade and petty crimes; the weakness of the state extends into the wider societal trends and over time wreak civil chaos.

On the flip side, the military is profiting from the crisis- in fact, they relish in the struggle of the average Venezuelan. In July 2016, Maduro assigned the responsibility of food distribution and price controls to the Venezuelan military. The military profits from contracts and control of prices; instead of selling food at the market price, the military doubles and even triples the price at its illegal shops. Beyond this, the monopoly over food by the military functions to further weaken opponents of Maduro’s philosophy by denying essential services. This is consistent with the quintessential trend of caudillismo in Venezuela and other Latin American countries; the military is continuously granted extrajudicial powers and its loyalty is ensured through the patronage of Maduro. There is no better example to demonstrate this than the creation of CAMIMPEG, a military company authorized to manage the extraction of oil. With oil accounting for 95% of export earnings, this is a crucial expansion of military power in the economic sphere. These actions are testimony to the fact that Maduro is attempting to cling on to any source of power, even if it entails buying the loyalty of the military at the expense of the livelihoods of his citizens.

The military is perhaps the only institution keeping Maduro in power as it represents his sole remaining stronghold over force. Maduro’s initial election victory ran on his continuation of the legacy of Chavez in terms of alliance with the military, however he emerged from the civilian wing of Chavez’s civilian-military alliance and he is in no shape to be as effective a negotiator with the military as his late predecessor. Chavez demonstrated excellent skills as a power-broker between the military and civil leadership; his rank as a general accentuated his identification and bonds with the military. Thus, his resource distribution to the military was more a matter of voluntary patronage. rather than patronage necessary for his political survival. Added to this is the question of whether Venezuela has undergone a subtle coup whereby military generals are assuming de facto rule and Maduro has been relegated to a mere puppet.  His hand on power has been diminishing continuously and was significantly crushed after the opposition won parliamentary elections in 2015, ending 17 years of Bolivarian rule.

Maduro is wont to cast the blame on Venezuela’s destitute situation on the United States but the truth is that he has no one to blame but himself.  In 2015, he was granted the power to rule by decree which provided his office with the requisite power to implement laws without any congressional approval required. Between that time and the present, Maduro has not moved a finger to enact durable and rectifying economic changes, which led to his defeat in parliamentary elections. Venezuela is in desperate need of economic salvation and a revitalization of its ailing democracy. Regional bodies, such as Mercosur, have attempted to discipline Venezuela by suspending the country for violating democratic principles, however the effect of this was miniscule. At this point, the sole credible source of political change may be from the military which may collude with opposition party once it realises the inevitable doom of the Maduro regime.