Bordering Tension: A Migrant Caravan Versus the Trump Administration 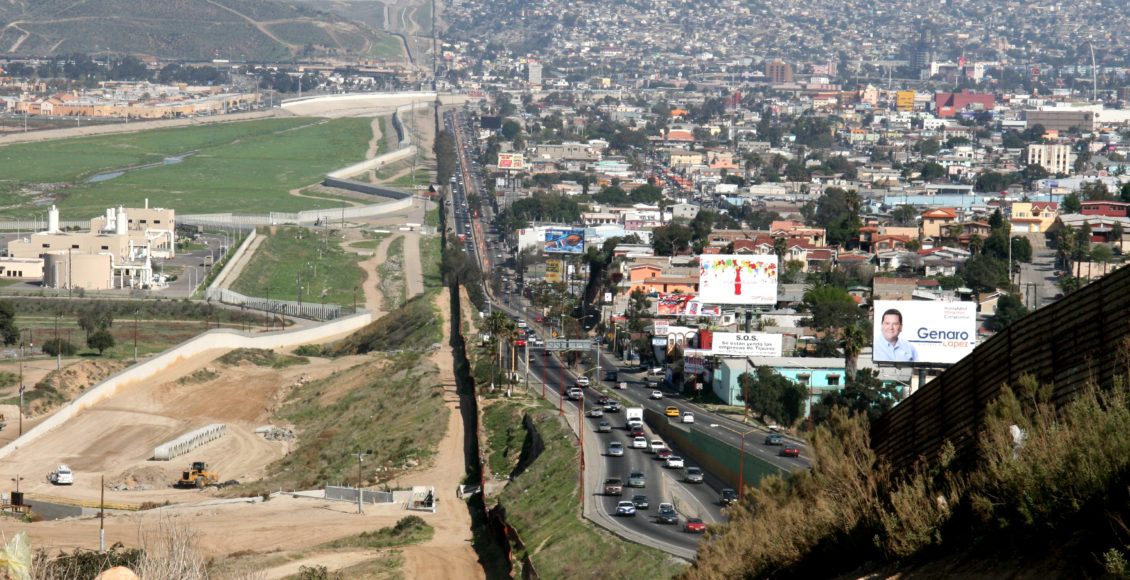 A small fence separates densely populated Tijuana, Mexico, right, from the United States in the Border Patrols San Diego Sector. Construction is underway to extend a secondary fence over the top of this hill and eventually to the Pacific Ocean.
Share

*For the purposes of this article the term “migrant” is meant only to convey that the individual(s) in question are in the process of emigrating from their homes. It is not meant to refute their status as refugees, etc. should they apply for such status.*

A caravan of thousands of Central American migrants left Honduras on October 12th, 2018. Its goal: the United States border. As the migrants make their way north, their numbers steadily grow, as does the media coverage about their journey and the expected response from the American government at the border.

In the short time  since the first caravan stopped in Tapachula, in southern Mexico, three other caravans, from origins including El Salvador and Honduras have departed towards the United States. These migrants are also fleeing violence and persecution, and believe that they can create better lives for themselves in the United States. Unfortunately, they are much more likely to find a “Keep Out” sign at the US border en lieu of a welcome mat.

The Trump Administration’s response to these caravans has been staunchly negative and anti-immigrant. This shouldn’t be a surprise considering the administration’s history of putting migrant children in cages, denying survivors of domestic abuse asylum, and forcing children as young as three to represent themselves at their deportation hearings. In this case, the administration plans to send more than five thousand military personnel  to various points on the Mexican-American border (to unlikely effect, considering border communities’ relatively low crime rates).  Border Patrol agents wearing riot gear have reportedly been training in Brownsville, and reinforcements are set to arrive before the caravan.  While there is a real possibility that this show of force may just be a ploy to appease Trump’s conservative base before the upcoming midterm elections, these escalations must be taken seriously.

The US has made international appeals for assistance in preventing the caravan to ever reach its borders. President Trump is said to have demanded that states including Mexico that lie between the migrant caravan and the US border stop the migrants en route . These efforts have been ineffective. While police officers in Mexico did briefly detain the first caravan to communicate offers of asylum in their country, only a few of the migrants reportedly accepted the offer, as the rest of the caravan continued to move North.

Despite the Trump administration’s aggressive stance on the issue, the American government is still obligated to honour the legal agreements that it has made regarding the rights of immigrants seeking asylum by properly fulfilling the obligations to which they have agreed. The United States has signed onto the 1967 Protocol from the the 1951 UN Convention on the Status of Refugees, which outlines the legal obligations the government of the United States has pledged towards refugees and people seeking political asylum. Political asylum status differs from refugee status in that it is granted to individuals already residing in the United States, who must apply within one year of entering the country. On the other hand, refugees, as defined by Article 1 of the Convention and the UNHCR website, are people who “reside outside [their] country of nationality or habitual residence; [have] a well-founded fear of persecution because of [their] race, religion, nationality, membership in a particular social group or political opinion; and is unable or unwilling to avail [themselves] of the protection of that country, or to return there, for fear of persecution.” Finally, migrants are defined simply as people moving from one place to another. Under the Convention, a refugee in a host country has the right to work, move freely (and have access to travel documents), practice their faith and so long as they respect the laws of their host country. To be granted refugee status, one must contact the UNHCR while still outside the United States, fill out the appropriate paperwork and send it to the US Citizenship and Immigration Service where it will be reviewed.

Essentially, a state’s obligations vary depending on wether an individual seeking entry is a refugee as opposed to a migrant. The Trump administration aims to take advantage of this semantic distinction. The idea that the American government owes nothing to individuals seeking political asylum is a common misconception that the Trump administration has capitalized on to justify the movement of armed forces to the border.

In contrast, United Nations has been keeping a particular interest in the caravans’ journeys and have taken an active role in giving aid. The UNHCR dispatched a team to Tapachula Mexico on the 22nd of October, in an attempt to provide support for local authorities , as well as humanitarian aid and information about their options to the migrants. The Red Cross is also working to help the caravan by providing sustenance and first-aid. The UN and various allied migrant advocacy groups categorically refute President Trump’s claims that the migrant caravan is hiding “criminals” .

Other advocacy groups, such as the Center for Human Rights Research and Promotion in Tegucigalpa, Honduras, are making concerted efforts to educate the migrants on the situations they will likely face at the American border, where they could easily become separated from their loved ones or held in detention. As previously mentioned, military personal have already sent to points on the border in anticipation of the migrants’ arrival. Although they will only be able to act as guards, the message that this decision conveys is one of overt aggression towards this caravan. At the very least, Trump’s current plan to keep the migrants detained in tent cities for as long as their asylum demands are being considered (a process which has been known to take years) is worrying when considering the nightmarish conditions migrants were kept in last summer. Additionally, the fact that the Trump administration flouted the July deadline to reunite all families that were separated at the border this summer behooves one to question their commitment to the laws that guarantee these new arrivals their rights.

If these events are any indication of what’s to come, the number of caravans should be expected to rise in the future. Given the staggering risk of such a voyage, migrants are understandably motivated to give themselves every advantage. It is safer to travel in a large groups, and as the current situation shows, media attention is likely to increase the amount of aid migrants are offered on their journey. Broadly speaking, sociopolitical conditions in Central America are increasingly weighed down by factors varying from government corruption to natural disasters. The situation will only continue to worsen if Trump makes good on his threat to withold aid from the Central American states of the caravans’ origin, as retribution for allowing their citizens to reach the US border.