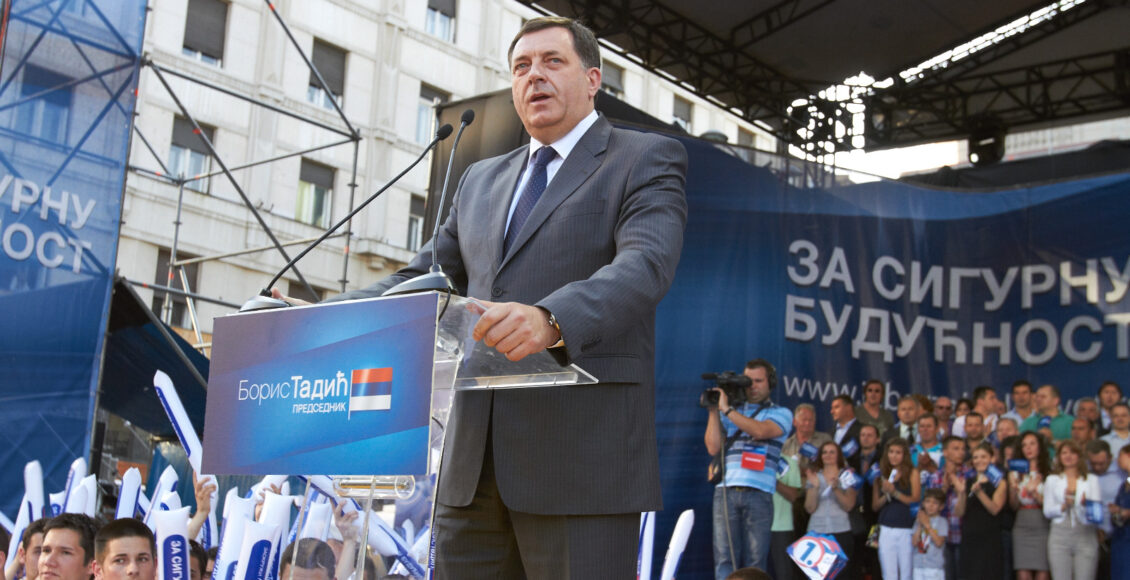 The Balkans is facing its worst crisis since the Bosnian War of the 1990s. The international community’s High Representative in Bosnia and Herzegovina, Christian Schmidt, warned in early November 2021 that Bosnia’s peace agreement which ended the War was at serious risk of unravelling.

These concerns are prompted by the actions of Milorad Dodik, the Serbian leader in Bosnia’s three-person presidency. Since 2006, Dodik has threatened Serbian secession — but he is now putting weight behind his claims, saying he will introduce legislation to remove the Serb Republic from the state’s joint institutions, including the judiciary, indirect taxation authority, and most importantly the armed forces. When asked how he planned to remove members of state services such as judges or military personnel from Serb Republic territory, Dodik referred to “1992 as the Slovenes did it”: an explicit threat to replicate the use of violence during the breakup of Yugoslavia.

Background: The Bosnian state and the current crisis

From 1992 to 1995, Bosniaks were in a territorial war with Bosnian Serb and Croat forces. The War resulted in 100,000 deaths and over two million refugees, the largest death toll and exodus in Europe since World War Two. The War was also characterized by ethnic cleansing. One such incident was the Srebrenica massacre in July 1995, where Bosnian Serb forces murdered 8000 Muslim men and boys. The massacre is recognized as genocide, and many perpetrators have been convicted of war crimes, but not all Serbs accept this fact.

The Dayton agreement ended the War by dividing the state of Bosnia along ethnic lines into the Serb Republic and the Federation shared by Bosniaks and Croats. These regions are tied by a central government led by a three-person presidency, with international envoys helping direct policy. Sectarian divisions have persisted since the War, as unresolved rivalries and differing interests continue to cause problems.

The current crisis began in July when Schmidt’s predecessor, Valentin Inzko, introduced jail terms for denial of the Srebrenica genocide, an oft-expressed view of nationalist Serbs. Dodik has repeatedly denied the Srebrenica genocide and claimed the decree gives him no choice but to start the dissolution of Bosnia and the Serb Republic’s secession. In response to the decree, Dodik and other Serb secessionists boycotted central institutions by refusing to participate, which has continued for months and could lead to further government paralysis.

Observers are nervous amid increasing tensions in Bosnia, where ethnic divisions led to a major war and genocide only 26 years ago. Dodik’s threat to pull out of central institutions would not only violate the Dayton peace agreement but equally undermine the state’s ability to function, potentially causing political deadlock and conflict. Many analysts argue there is no way to break up Bosnia peacefully, as even a legal separation could lead to renewed ethnic conflict. The suggestion of secession alone could prompt serious destabilization.

The greatest threat to Bosnia’s stability is Dodik’s suggestion to withdraw the Serb Republic from the joint armed forces and create its own army. In October, Dodik said Bosnian judiciary, security, and intelligence services would be banned from the Serb Republic in an attempt to make Serb-exclusive institutions. Such mono-ethnic institutions were the vehicles for genocide in the 1990s; Bosnian Serb police, military, and intelligence services were at the centre of the systematic violence against non-Serbs. Based on this history, suggestions to recreate a Serb Republic army are causing legitimate fear. This is doubly concerning due to Dodik and other Bosnian Serbs’ denial of past genocide. Societal failure to unanimously condemn genocide and allow denial to continue contributes to the risk of future genocidal actions.

The threat of violence in Bosnia has repercussions for the entire Balkan region. The calls for secession and ethnic tensions in Bosnia will inevitably impact other regional divisions, including the ongoing conflict between Serbia and Kosovo. Moreover, a Bosnian conflict could be exploited by other countries, like Russia and China, who have both supported many of Dodik’s claims, including his unwillingness to recognize Schmidt as the international community’s High Representative.

Citizens of Bosnia, many of whom lived through the war and lost relatives, have expressed serious fears about the secession moves and their potential to cause violence. Ahmed Hrustanovic is an imam in Srebrenica who lost his father, both grandfathers, four uncles, and other relatives in the 1995 genocide. He says current threats to form a Serb Republic army are the worst political situation since the war, calling it “a defeat of humanity” that Dodik has openly moved to re-form an army that committed genocide 26 years ago.

The role of the US and the EU

The United States (US) and the European Union (EU) play a crucial role in ending this crisis, but they have so far shown a lack of motivation to act decisively. Dodik has been threatening secession for 15 years, with nothing but appeasement coming from the international community. NATO states failed to end these threats years ago but now, with more immediate concern, there is no room for them to drag their feet.

In his report to the UN, Schmidt made it clear that this is a security crisis, not just a political one. Therefore, the international community needs to respond accordingly with a security response. Solely diplomatic efforts failed in the 1990s and would likely face the same fate today. One suggestion has been to reinforce the European Union Force Bosnia and Herzegovina (EUFOR), the operation tasked with overseeing the military implementation of the Dayton peace agreement. EUFOR is supposed to ensure a safe environment but has been unable to act as a suitable deterrent for years. Increasing this deployment would convey that the EU is taking this crisis seriously and would expand military presence in case the Serb Republic creates its own armed forces.

Both the US and EU have issued statements calling all political actors to abandon secessionist rhetoric and respect state institutions, but this has angered many people who emphasize that there is only one side violating the accords and calling for division. Moreover, there are also concerns about the level of coordination in the West. The US and EU’s engagement in the Balkans has slowly declined as both become less interested in the region. This damages hopes for EU membership in the Balkans, which is considered crucial to the region’s long-term stability, and presents the lack of collaboration and even disagreement between Western nations. To address this crisis, the US and EU must coordinate their actions to prevent Bosnia from falling into violence.

Not only does the international community have a clear mandate to protect peace in Bosnia, but it is in their best interest to do so. Escalated violence in Bosnia could lead to another massive refugee crisis and entangle the West in a conflict with Russia. If not to maintain Bosnia’s stability and peace for the sake of its citizens, American and European leaders should nevertheless intervene in their own interest to avoid a crisis in southeastern Europe.

The crisis must be avoided

There are actions that the West could take to calm the situation and avoid escalation. Analysts argue that the West has done what it is willing to do in the Balkans, rather than what it should do. The US and EU must create specific “carrots and sticks” to reinstate clear red lines. This could involve multilateral sanctions coupled with treating Dodik’s secessionist moves as an outright challenge to European security. Instead of repeating the complacency of the 1990s, the West must treat this as a real and immediate threat to be rolled back now. Failing to challenge this crisis could create legal and political chaos that could devolve into violence. The question now becomes: is the West willing to act?