Brazil in Turmoil: The Cost of Scandal and Corruption on Democracy 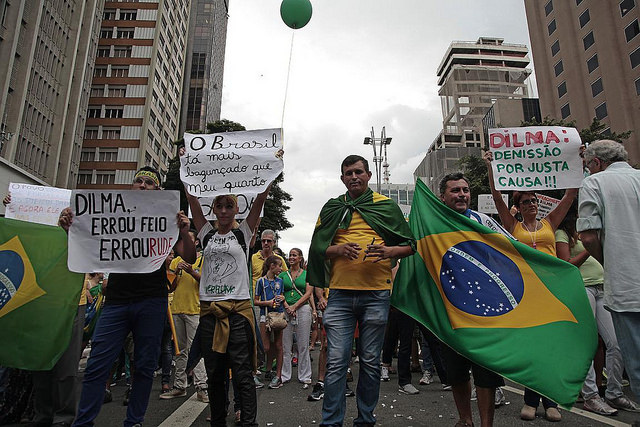 Thousands of Brazilians protest the corruption of Rousseff's government in March, 2015. https://flic.kr/p/rAY3UN
Share

Anyone following the politics of the United States or Europe could say with certainty that political chaos seems to be the norm in the world. Few, however, would think to add Brazil to the ever growing list of countries rife with torment and turmoil. Even those that are familiar with the political scandal plaguing the elite of Brazil still remain unaware of the true magnitude of corruption that prosecutors are battling against, and the implications this carries for the country’s status as a democratic nation.

The name that first springs to mind when conjuring images of corrupt politicians is that of the country’s former president, Dilma Rousseff. Re-elected in 2014 by an incredibly narrow margin, Rousseff’s approval rating rapidly slid even further south. Head of the Workers Party (PT), a left leaning political party traditionally viewed as a friend to the poor and working classes, Rousseff became the subject of a number of protests once news of a major corruption scandal involving the state run oil company Petrobras broke out in 2014.

Dubbed “Operation Car Wash”, the investigation into the Petrobras dealings uncovered a kickback scheme operating on a scale unlike anything previously seen. A syndicate of companies colluded with high level Petrobras executives to fake competition in order to overcharge for construction and service work for the state owned, publicly traded oil company. In exchange for overseeing the companies’ dealings, executives were rewarded with bribes, which were then handed to political figures for use in campaigns and other personal expenditures. In total, upwards of US$5.3bn changed hands.

Understandably, discontent mounted, and Rousseff’s political rivals sought impeachment. Proceedings began in May 2016, and while charges were officially brought up on allegations that she manipulated government bookkeeping while seeking re-election (a practice, she noted, that was common in all previous administrations), it’s entirely evident that her impeachment was motivated by her alleged role in the infamous Petrobras scheme, or, according to an increasingly vast number of outside observers, a parliamentary coup to remove PT from power. Rousseff was formally impeached on August 31st, 2016, and Vice President Michel Temer officially took the office of President on September 1st.

On the surface, this appears to be a major win for Brazil, and in many ways it is. Thanks to Operation Car Wash, scores of indictments and arrests of leading executives and politicians, representing both PT and other political parties, have been made, and numerous criminal cases have been filed against the syndicate of companies associated with the Petrobras scheme. Even former President Luiz Ignacio Lula da Silva, one of Latin America’s most prominent and influential political figures, has been accused of playing a major role in the scandal, and is currently under investigation by federal prosecutors. He and his wife will go to trial over claims that they illegally received about $1.1 million US from a construction company for a luxury apartment.

For young democracies like Brazil, the ability and willingness of the judiciary to challenge corruption among political and economic elites on such an massive scale signals a sincere commitment to the rule of law, an institution vital to the survival of democracy. The judges and investigators responsible for the majority of  Operation Car Wash, the most notable being Sergio Moro, a federal judge, have cemented themselves as folk heroes to disheartened protesters. However, the powers that fought for the removal of Rousseff can’t necessarily be seen as waging a completely authentic anti-corruption campaign. In fact, the groups that battled for her impeachment are at least as corrupt as she is, if not more.

To prove this, one only has to look as far as the new president himself. It was known from the start that President Temer is scandal-tainted. Throughout his decades in office, he’s been implicated in a number of corruption cases of his own, including several dealing explicitly with the Petrobras scandal that ousted his former boss. Though the sitting president enjoys many legal protections, the Brazilian Supreme Court has given the green light to investigators to open a probe into the allegations of corruption perpetrated by both Temer and several high ranking members of his political party, the Brazilian Democratic Movement Party (PMDB).

It’s not just Temer who carries the telltale stain of corruption – nearly 60% of Brazil’s legislature has been convicted or investigated in some form. In fact, many of the representatives responsible for Rousseff’s impeachment are currently facing federal investigations of their own. Senate president Renan Calheiros is accused of accepting millions of dollars in bribes and Eduardo Cunha, the speaker of the lower house, is currently facing prosecution for lying to Congress regarding concealed offshore bank accounts. All in all, 36 out of the 65 members of the House impeachment committee are currently facing legal proceedings.

It’s easy to see why many decry the impeachment trials as a sham. A democratically elected leader was replaced by an unpopular, legally unelectable leader. Forecasts predict only two percent of the population of Brazil would re-elect him in 2018, but that’s not even possible: he is not allowed to run for president in 2018 as he’s been found guilty of violating campaign finance laws. As of April 9th, 2016, 58 percent of Brazilians said they’d want him impeached if he became president.

So how did a man this unpopular attain the nation’s highest office? Many critics are calling Rousseff’s impeachment and Temer’s rise a “coup” and an attack on democracy. Judges, including the much exalted Moro, used legally and ethically ambiguous means to gather evidence and mobilize the support of an easily swayed populace. Those who seemed to fight so valiantly for justice were in reality playing a game of political point-the-finger at the behest of even more powerful actors.

Many people around the world are crying foul, including other leftist governments in the region. Both Venezuela and Ecuador withdrew their ambassadors from Brazil in protest of the Senate’s vote to impeach, and Nicaragua, Cuba, and El Salvador all criticized the vote, calling it, in the words of Venezuelan President Nicolás Maduro, a “right-wing oligarch’s coup”. While the United States supports the new regime, Vermont Senator Bernie Sanders urged “the United States to take a definitive stand against efforts to remove Brazilian President Dilma Rousseff from office”.

Impeachments are a vital check on presidential power, but can only be considered valid when they are legally sound and scrupulously implemented. In the case of Dilma Rousseff, what on the surface seems like a cut and dry corruption charge is in fact just a facade meant to conceal a festering underbelly rife with systemic corruption, economic depression, and a complete and total divide between the elite and the impoverished. Brazilian citizens want the wealthy to answer for their crimes, but until the corruption endemic to Brazil’s ruling class is cured, this cyclical pattern of scapegoating and finger pointing will never cease, and answers will never be found.