Brexit: Keep Calm and Carry On? 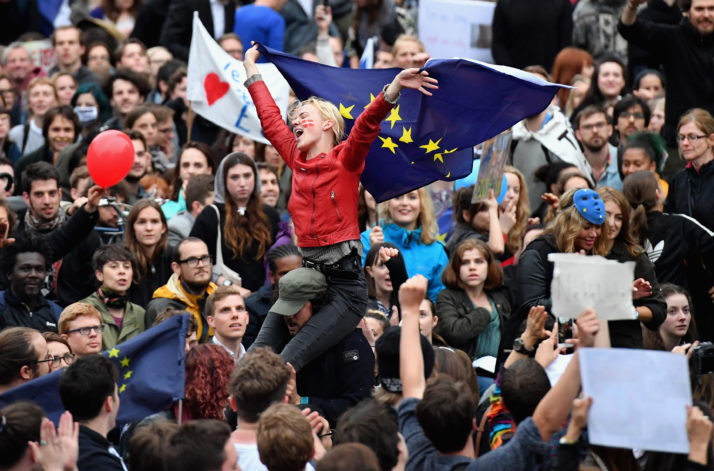 Crowds gather in protest against the EU referendum result
Share

In the wake of Brexit, all is uncertain as the world scrambles for answers while scholars and pundits each advance their own explanations regarding this new world order and what a European Union without the United Kingdom would look like.

On the twenty third of June, the United Kingdom voted to leave the European Union in a referendum the results of which have since sent shockwaves throughout the world. The effects of such an event have not yet been fully consolidated; nevertheless, immediate repercussions include uncertain markets and a rising trend in isolationist and protectionist rhetoric in both Europe and the United States.

British Prime Minister David Cameron, along with Canadian Prime Minister Justin Trudeau and United States President Barack Obama, together with the leaders of France and Germany, all fought for Britain to remain in the EU. However, the Leave campaign won with 52% of the vote. England and Wales voted primarily for a Brexit, while Scotland and Northern Ireland demonstrated staunch support for the UK to remain in the EU. Not only did Brexit turn out to be the foremost fault line of the United Kingdom, revealing the deep political divisions which exist between Britain and the two countries of Northern Ireland and Scotland, but it also revealed the increasingly fractured nature of Britain’s Conservative Party, where infighting between members caused political instability and a general sense of uncertainty amongst the public. Approximately half of the Conservative Members of Parliament were in favour of leaving the EU, while Prime Minister David Cameron, who has since notified the public of his coming resignation, along with sixteen members of his cabinet, supported remaining in the EU.

The Brexit uprising was born in the small port towns and industrial villages of England and Wales. It is impossible to narrow down and highlight one single reason as to why people in these towns voted for an EU withdrawal, as the motives of voters were complex and diverse. While there were those who blamed the EU for lax immigration policies, essentially arguing that an influx of migrant workers was detrimental to the national and local economies of Britain, there were others who felt a loss of democratic sovereignty within their country and a loss of democracy itself inside of the EU was reason enough to leave. Broadly speaking, voters concerned themselves with the loss of British control over national economic and immigration policies. Other factors, such as a decent dosage of euroscepticism, together with a zealous portrayal of nationalist sentiment and a declining rate of public confidence in the establishment were instrumental in fuelling the Leave campaign  and giving it the energy it needed to triumph over the Remain side. Finally, there were voters who simply held the EU accountable for any economic misfortunes or mishaps that they happened to suffer, without consideration of a larger global picture. This last reason proves most alarming, for it underlines the deeply troubling nature of referendums in general.

That voters were ill-informed and unaware of certain key pieces of information reveals the inherent problem of holding a referendum, for nothing in this world is black or white, especially when it comes to economic and politics. Referendums often lie vulnerable to oversimplification, with complex geopolitical and economic issues being transformed and dwindled down into a simple yes/no question. Referendums also risk being susceptible to a public that is lacking in awareness on a given topic. Without extensive knowledge on the subject of a referendum, governments risk endorsing an ignorance of the masses, so to speak, a dangerous phenomenon with rippling repercussions. In the case of Brexit, the political and economic relationship between the United Kingdom and the European Union is far too complex to appear as a single question on a sheet of paper. There are those who also argue the inherent irony of holding referendums altogether, for why elect political representatives if only to second-guess their behaviour? Not only that, but referendums also prove troubling in that they leave deeply critical questions of politics, economics, and human rights, for example, up to the majority vote. How effective are referendums in strengthening the institutions of democracy in the first place? While they are useful in giving a voice to the people, the overall power of referendums to effect their desired ends must be called into question.

Besides the issue of holding a referendum, Brexit also sheds light on the steady rise of nationalist sentiment throughout Europe and the United States. Euroscepticism, coupled with identity politics, has incentivized a growing number of right-wing and populist groups to spread their zealous messages of patriotism throughout the continent. Britain’s withdrawal from the EU has undoubtedly paved the way for other nations to follow suit. Indirect though it may appear, Brexit’s gift to the world in part is a rekindling of the separatist spark. Britain has shown the world that a new way is possible: that independence and autonomy are the necessary ingredients of power and success. It was just hours after the results of the Brexit vote that Marine Le Pen, leader of France’s far-right National Front, reveled in light of the news and took to the press: “For all patriots, for anyone who loves liberty, today is a day of joy. It is not that Europe is dead but that the European Union is teetering, and the nations are being reborn.”

The rise in the populist leader’s popularity comes at a time when Europe is most fragile and its citizens stand united in their disenchantment of government leaders and authority figures. Separatist groups and movements, along with right-wing parties, are gaining momentum as people feel increasingly disadvantaged by the effects of globalization, ignored by the establishment, misled by their leaders, and, more simply, down on their luck in terms of the current economic and geopolitical situation of Europe. Confidence in the French government has decreased, for example, after recent years of economic stagnation, terrorist attacks, and pressures from the ongoing refugee crisis. It is not unimaginable that Brexit will inspire and fuel other separatist movements, such as is the case with the Scots, Catalans, and Bavarians.

A rise of the sovereign nation-state in this age of global political and economic interconnectedness means a step in the opposite direction of progress and development. Isolationist and protectionist movements during this time will not and cannot boast any benefits. In response to the spirited and populist messages of Donald Trump, as well as Brexit and the increase in Eurosceptic rhetoric, Canadian Prime Minister Justin Trudeau took the recent North American Leaders Summit as an opportunity to denounce such isolationist sentiment and praise the North American example of acceptance and diversity. In a speech addressed to the House of Commons, Mr. Trudeau expressed his deep appreciation and admiration of Canada’s accepting nature, stating that diversity is what defines Canada as a nation of true freedom.

Yet it is difficult, if not impossible, to compare Canada to Europe. Canada and the United States are settler societies; close to their entire populations are immigrants that hail from across the sea. North America and Europe are not identical in nature, meaning that one must be considerate of other factors when contemplating topics such as economic liberalization, immigration, and diversity. North America does offer the world a glimpse into what a diverse, culturally rich society looks like. It teaches the rest of the world that it is possible to live together as one, united in government and rule, and strengthened by the cultural, social, ethnic, and religious differences of each citizen. Those differences do not divide us as Canadians, but unite us. However, Europe and North America are not on a level playing field. Geographically speaking, one is a continent primarily consisting of three large nations, none of which are land-locked, while the other is comprised of nearly fifty countries, excluding minority groups pushing for independence. The national identity that each country feels so deeply is unique to Europe and cannot be understood in the same way in North America.

In the global age, this era of interdependence and interconnectedness, it is highly improbable that any benefit will come from isolating oneself from the rest of the world, as Britain has done with the European Union. Globalization has bound the world in such a way that any sudden withdrawal from the network will affect the entire international community in one way or another. Brexit has demonstrated this very phenomenon, and will likely suffer the consequences.