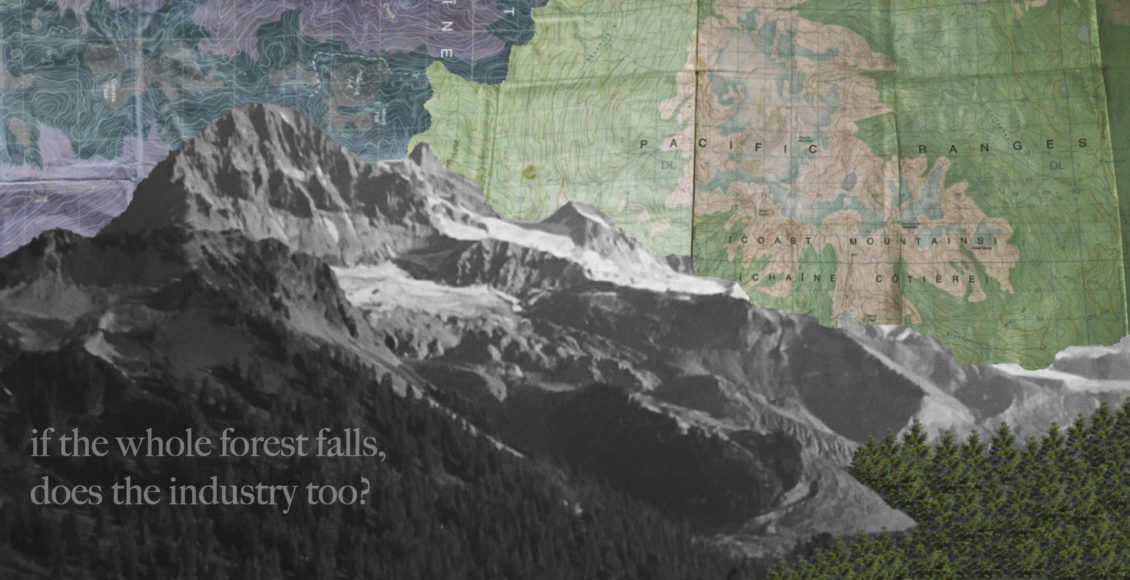 For decades, British Columbia (B.C.) has prospered from a high demand for lumber. The province is home to an expansive temperate rainforest, the logging and harvesting of which enables the forestry industry to employ thousands of people with, until recently, a high degree of job security. However, the amount of merchantable logs in the province is declining due to a slew of natural disasters, and trade disputes with the United States over tariffs on softwood lumber have increased the cost of exporting lumber. These factors have resulted in a steady decline of the forestry industry that began in the late 1990s, but has experienced particularly sharp downturns in 2005 and 2018, affecting the livelihoods of thousands of British Columbians. The forestry industry also plays a significant role in the preservation of B.C.’s forests, and its decline therefore poses a severe risk not only for the province’s economy, but its environmental sustainability as well.

Impacts of the Decline of the Forestry Industry

Approximately 32,000 jobs have been lost in the province’s lumber sector between 2003 and 2016. In recent years, B.C. has been the site of multiple record-breaking wildfire seasons and beetle infestations, reducing the number of trees that can be logged. This has left companies scrambling to devise alternative solutions so as to continue making a profit. However, these solutions constituted the termination of employment for thousands of people, primarily in areas where forestry is the main source of household income. While companies have been able to keep their profit margins viable, it is at the cost of almost a thousand jobs per year. These job cuts endanger not only livelihoods but forests as well, the latter of which is currently managed by a strict regulatory regime that enforces sustainable practices and corporate responsibility. B.C.’s licensing regime mandates that forestry companies, and by extension their employees, are responsible for maintaining the health of harvested areas. For example, loggers—often the personnel closest to initial wildfire sites—are legally required to abate potential fire hazards so as to quickly address fires before they spread.

As more surveyors and loggers become unemployed, many wildfires are left to spread across larger areas, creating a much greater problem that requires more time and resources to address. This was the case in 2018, when the province saw over 1,000,000 hectares of land burned during a severe fire season, a 93% increase from two years prior and an 80% increase from the decade’s average. With increasing unemployment in the forestry industry, the next fire season could be even worse than in 2018 when the province declared a state of emergency. During this season, thousands were forced to flee their homes and logging was virtually impossible, effectively stalling the industry in the province for the duration of the summer.

Additionally, the industry is still feeling the effects of a major mountain pine beetle infestation in the late 1990s that killed approximately 50% of all pine trees in British Columbia. While the invasion peaked in 2004, the end of the salvaging period has severely crippled lumber mills in the Interior.  “For the past two decades, foresters have been able to salvage healthy pine and clear out dead trees to make room for replanting,” noted Jonathan Armstrong, the General Manager of Timberlands Planning at Western Forest Products, a major lumber company in B.C. “But now, the salvaging period is ending, and the mills don’t have anymore wood to process.

While the pine beetle primarily affected forests in the Interior, mills on the coast are also facing external problems: since 1982, Canada and the United States have disputed trade agreements relating to the export of softwood lumber from British Columbia. Currently, the tariffs to export softwood lumber into the U.S. from Canada are 20%, making the cost of exporting the lumber more than its actual value. So, while coastal mills rely on the sale of softwood, it is no longer profitable to produce, thus resulting in the closures of dozens of mills.

These closures undoubtedly have a major impact on B.C.’s economy. Approximately 150,000 people are employed in forestry and lumber in the province with most working in small businesses with less than 20 employees. Forestry also directly supports B.C.’s transportation industry, as approximately 14 million metric tonnes of forestry cargo pass through B.C. ports each year. For many towns, primarily those in rural areas or on Vancouver Island, mill closures can be devastating. These towns are largely dependent on the forestry industry, with most of their residents employed at one of the mills. With its closure, residents are often unable to sell their houses and are forced to leave their communities en masse to find employment elsewhere.

Evidently, the lumber industry has substantial influence in British Columbia, and as a result, forestry-based environmentalism does as well. While climbing temperatures have inspired the rise of a global environmentalist movement calling for more sustainable practices, environmentalism in B.C. has been prevalent since the early 1900s, when loggers advocated for increased regulation of logging operations. In 1993, B.C. became the site of the infamous “War in the Woods”, where 11 000 people protested the logging of old-growth forests in the Clayoquot Sound. The demonstrations arose after local First Nations’ and environmentalist organizations’ concerns about the scale of logging operations were largely ignored by forestry company Macmillan-Bloedel. It remains the largest incident of civil disobedience in Canadian history and continues to serve as inspiration for British Columbian environmentalists.

In 2016, environmentalists forged an agreement between forestry companies, the provincial government, and First Nation communities to introduce the Great Bear Rainforest Land Use Order and the Great Bear Rainforest Management Act to enact efforts aimed at conserving 85% of the Great Bear Rainforest and bar its old-growth trees from future harvesting. Furthermore, the most recent provincial election in 2017 resulted in a coalition between the New Democratic Party and the Green Party, giving an unprecedented amount of influence to environmental interest groups. It is easy to understand why environmentalism is such a prominent force in B.C.: much of the esteem of the province comes from its natural beauty, particularly from its unique temperate rainforest, and the residents of B.C have shown they will take action against foresters to protect it.

However, environmental interests and practices employed by forestry companies are not always in conflict. As 95% of B.C.’s forests are publicly owned, the provincial and federal governments are able to enforce the use of sustainable practices so that logging companies ensure continued prosperity in harvested areas. These laws, specifically the Forest and Range Practices Act (FRPA), obligate any license-carrying forestry company to fulfill certain sustainability requirements. For example, licensees must replant trees in the same area as those they harvested, and are then liable for the health of the new trees until they reach maturity. While these regulations assure that foresters are legally responsible for reforestation in B.C., forestry companies have been employing sustainable harvesting practices since before the creation of FRPA in 2002. These efforts are not entirely driven by environmental concerns, but rather economic ones: forestry relies on trees being a renewable resource, and sustainable harvesting methods allow the industry to continue producing lumber in previously harvested areas.

Since the 1930s, approximately 7.5 billion seedlings have been planted by forestry companies in areas affected by logging, wildfire, or insect infestations. While many environmental campaigns encourage individuals to plant a few dozen trees, foresters plant hundreds of thousands each year, so that about 80% of all harvested trees are replanted. Furthermore, forestry companies were largely responsible for cleaning up the damage left by the mountain pine beetle infestation. The salvaging of the healthy trees and the removal of dead ones not only reduced the chances of a wildfire breaking out, but also removed many barriers for wildlife and enabled the growth of new forests: “The salvaging operations [conducted by forestry companies] definitely did benefit the environment. Where you would have seen dead trees, there are now healthy, growing forests,” said Armstrong.

The B.C. forestry industry was once proof that natural resource-based industries can turn a profit and serve to protect the environment, as long as they adhere to sustainable practices. However, decreasing demand for lumber and increasing costs to produce it may serve to invalidate the benefits of sustainability-driven forestry practices in the modern era. Fortunately, there are potential solutions: if the Canada-U.S. softwood lumber dispute is resolved, forestry companies will be able to re-employ thousands of people who lost their jobs due to the need to cut costs.

Furthermore, the provincial government is in a crucial position to not only revitalize the forestry industry, but encourage innovation: “[To address the decline,] the government can create an environment where businesses are able to innovate and develop new, better forest management practices,” said Armstrong. While this freedom would need to be balanced with existing regulations, Armstrong believes that offering companies the opportunity to approach environmental objectives their own way will result in job creation and better sustainability practices, giving the industry more flexibility as the industry adapts to environmental changes in B.C., such as potential wildfires or insect infestations. However, formulating these practices is impossible without collaboration between forestry companies and environmentalists.

While the existing regime did succeed in enforcing environmental standards, much to the delight of B.C. environmentalists, it was primarily through oversight and detailed practice-based regulations. According to Armstrong, if regulations are rewritten to be more result-oriented instead, this would inspire foresters to collaborate with advocacy groups to innovate practices that are both sustainable and efficient. In B.C., it appears that the best way to simultaneously address a falling industry and major environmental issues is by fostering cooperation between two influential sectors in order to create practices that satisfy and benefit both groups.

“You can’t ignore these problems,” said Armstrong. “But, at the end of the day, when [environmentalists and foresters] get together, talk about these things, and work things out, that’s how we help these situations.”