Call for an Anti-Oppressive Approach 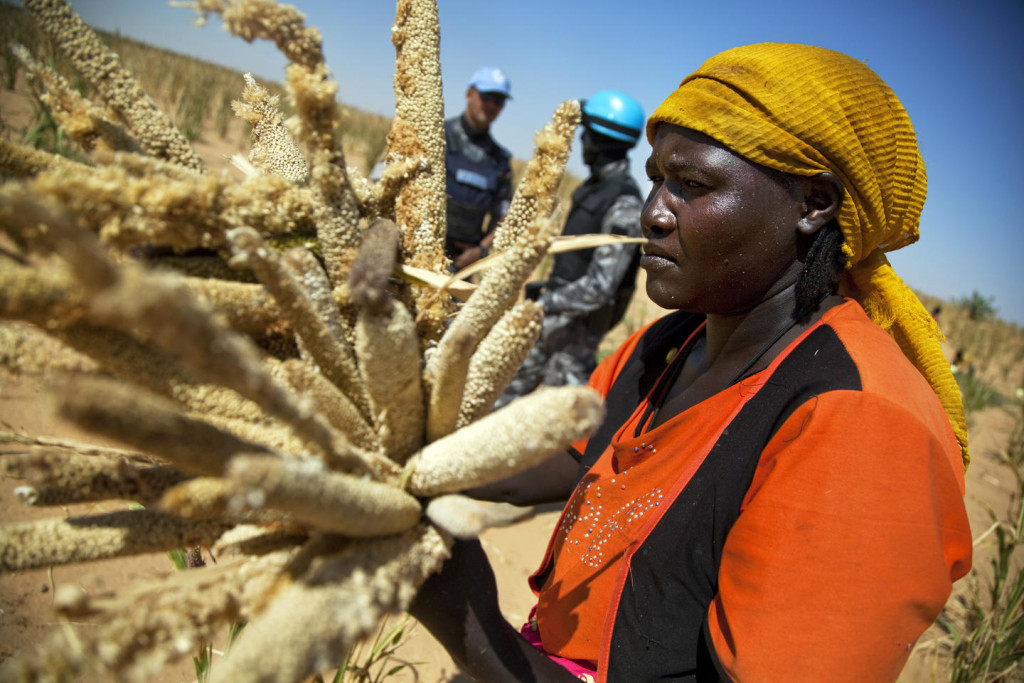 Over six months ago, I questioned whether the appointment of a Saudi Arabian ambassador to chair the Human Rights Council of the United Nations posed an ethical or merely symbolic dilemma. The moral corruption goes deeper, into the most visible symbol of the UN itself: the peacekeepers. It is indicative of the United Nations’ lack of effectiveness that its own employees are not only failing to enforce peace, but are actively creating more violence. As UN Secretary General Ban Ki-Moon said, sexual violence “is as destructive as any bomb or bullet”—so why is it happening so rampantly under the name of the United Nations ‘peacekeeping’ missions? I believe that the failure to combat sexual violence indicates the United Nations’ role in maintaining systemic oppression by failing to address the root causes.

After months of allegations of sexual abuse and exploitation perpetrated by the peacekeepers, the United Nations announced 108 new cases, mostly occurring to children. A particularly horrifying case pertained three girls in Central African Republic who told UN staff members that a French military commander tied them up and forced them to engage in intercourse with a dog. In response to the recent scandal, UN human rights chief, Zeid Ra’ad al-Hussein, argued that governments must hold their troops accountable and do more in order to stop sexual abuse “otherwise this awful cycle of abuse will never end”.

However, this cycle of abuse cannot end if systemic oppression is not addressed. If the UN and governments do not recognize the root causes of sexual violence, they cannot adequately attempt to truly eradicate it; all efforts are merely band-aid solutions to the cancer of patriarchal imperialism. It is necessary to implement an anti-oppressive approach in all fights against injustice—particularly in the United Nations, which is supposed to promote human rights and international peace. True justice can never be achieved when organizations and institutions intended to protect us instead maintain and perpetuate the systems of oppression that cause injustices to occur.

These recent allegations contribute to the United Nations’ horrific history of decades of sexual abuse through ‘peacekeeping’ missions. The first widespread reports of the involvement of UN peacekeepers in sex trafficking came out during the 1990s, after investigators discovered that soldiers frequented brothels in Bosnia and Kosovo that relied upon women who were forced into prostitution. Up to 2,000 women are estimated to have been coerced into sexual slavery in Kosovo.

A United Nations report from 2005 entitled “A Comprehensive Strategy To Eliminate Future Sexual Exploitation and Abuse in United Nations Peacekeeping Operations” was intended to reform the way in which peacekeeping troops behave on United Nations missions by creating a new investigative framework in order to identify as well as prevent soldiers from exploiting and abusing those whom they are trying in principle to protect. The report concedes that “there regrettably will always be those who violate codes of conduct and dishonour the many who have given their lives in the cause of peace. Sexual exploitation and abuse by military, civilian police and civilian peacekeeping personnel is not a new phenomenon.” The resigned tone of this report is disturbing. It is unacceptable that sexual violence occurs and the aim of peacekeeping missions should obviously include eradicating sexual violence perpetuated by its own members. The importance of an anti-oppressive approach to justice includes its emphasis on change from an institutional to an individual level.

The report insists that United Nations missions ought to function upon the principle that they must not “in any way increase the suffering of vulnerable sectors of [a] population”. The fact that this needed to be encouraged by an official report is shocking. What is furthermore shocking is the explanation as to why sexual abuse and exploitation by soldiers threaten the security of peacekeeping missions. The report suggests that sexual exploitation exposes the missions to “blackmail and violent retaliation”, as well as transmitting HIV/AIDS. In addition, it is mentioned that survivors of sexual abuse “frequently suffer from psychological trauma…and stigmatisation by their families and communities, which deprive them of all support.” The fact that the report is more concerned with retaliation than the effects on the survivors shows that it fails to properly internalize its own suggestion to not increase suffering.

Suggestions from the report include banning all sexual relations between UN employees and the local populations, encouraging better recreational facilities for soldiers, and increasing the percentage of female employees. It argues that “the presence of more women in a mission, especially at senior levels, will help to promote an environment that discourages sexual exploitation and abuse.” However, this ignores the fact that the mere presence of women does not itself eradicate the patriarchal imperialist violence that contributes to sexual abuse. It will take a much deeper understanding of gender violence in order to adequately address it. Suggestions that guilty soldiers ought to have their pay reduced is disrespectful, at the very least, because it implies that an appropriate form of punishment for soldiers who have been proven to sexually abuse and/or exploit vulnerable people whom they were charged to protect is to merely reduce their salary. It eliminates the possibility for discussion as to whether such perpetrators of violence ought to be employed in organizations that are attempting to uphold justice and peace.

According to a United Nations report released in June 2015, 480 allegations of sexual abuse and exploitation were reported from 2008 to 2013. One-third of the allegations—approximately 160 in total—involved minors. In 2014, 80 allegations were reported, while the number of new allegations increased to 99 in 2015. Most of the allegations concerned ‘peacekeepers’ serving in Central African Republic, the Democratic Republic of the Congo, Mali, Ivory Coast, and Haiti; other instances of sexual abuse occurred in several Europeans countries, as well as Canada. Additional allegations are against police and troops from countries including Burkina Faso, Burundi, Cameroon, Congo Republic, Gabon, Germany, Ghana, Madagascar, Moldova, Morocco, Niger, Nigeria, Rwanda, Senegal, Slovakia, South Africa, and Tanzania.

Human rights groups cite the method by which allegations of sexual abuse are handled as one of the problems contributing to the UN’s failure to adequately address sexual violence. In the current method, countries that contribute troops to UN peacekeeping missions are responsible for prosecuting soldiers’ accused of abuse. As a result, such prosecutions often occur quietly and without much transparency or punishments.

In December 2015, a report “Taking Action on Sexual Exploitation and Abuse by Peacekeepers” presented the findings of an independent review panel concerning the way that the United Nations handled numerous allegations of child sexual abuse by foreign troops in CAR from 2013 to 2014. The report highlighted the UN’s “gross institutional failure to respond to the allegations in a meaningful way.”

However, what is missing from the report is an anti-oppressive analysis of this ‘gross institutional failure’. I believe that part of the reason why such behavior has continued is due to the United Nations’ lack of an anti-oppressive approach. The 2005 report displayed a flawed understanding of how to address sexual violence, as does the 2016 resolution that just passed in March. This resolution came only after the United States, the largest financial contributor to peacekeeping missions, urged the UN to send a strong message that the UN “will not tolerate the escalating problem.” This legally-binding resolution requires that military or police units are repatriated “where there is credible evidence of widespread or systemic sexual exploitation and abuse”. Furthermore, units are to be replaced in instances where perpetrators are not held accountable or cases are not properly investigated, or if the Secretary General is not updated about the progress of investigations. The UN has also begun to name the countries of alleged perpetrators, as an effort to pressure countries into pursuing allegations that often are ignored. However, as crisis response director for Amnesty International Tirana Hassan said, such efforts are “a step in the right direction but it will still require significant reform throughout the UN system.”

Anti-oppression is not only way to think about the world, but it is also tool to “respond to the complexity of the experience of oppression” (B. Burke and P. Harrison, Communication, Relationships and Care: A Reader, 2003). As Deb Singh writes, it is “a way of naming oppression that happens against certain people, based on their identities, and then a way to work toward ending that mistreatment, oppression, violence toward that particular group.”

Emphasizing the individual’s lived experiences, anti-oppression understands that each person’s experience of oppression is uniquely determined by their race, gender identity, sexual identity, ability, religion, class, the way they present themselves, either intentionally or unintentionally, the society in which they live, etc. For example, it acknowledges that the way a trans woman of colour experiences racism is different from that of a cis man of colour, that there is no one experience of oppression common to all people of colour or all women.

In understanding the way that systems of oppression intersect and work to maintain and perpetuate one another, an anti-oppressive approach to justice acknowledges that oppression occurs from the interpersonal to the institutional level. It thus understands that only a holistic approach can successfully attempt to eliminate systemic oppression and the ways in which it manifests on an interpersonal and societal level.

Why ought the United Nations adopt an anti-oppressive approach?

As Al Jazeera’s James Bays said, the recent scandal reveals that “the whole human rights process in many ways is flawed.” The persistent and escalating problem of sexual violence perpetuated by peacekeepers indicates precisely that isolated efforts to tackle human rights abuses is insufficient. In order for the United Nations to begin to adequately address sexual violence, it must first acknowledge its own complicity in the kyriarchy, which maintains all forms of systemic oppression and inequality. An appropriate response to sexual violence within the United Nations goes beyond calling out countries that fail to prosecute its troops or increasing the number of female employees. It requires a comprehensive understanding not only at an institutional level, but just as importantly at the interpersonal level. The behavior of the peacekeepers demonstrates that the individuals charged with protecting vulnerable populations do not currently have a proper understanding of the ways in which their behavior makes them complicit in perpetuating systemic oppression. In order for the United Nations to be able to appropriately and respectfully respond to the violence they are maintaining and perpetuating, it is necessary that it endorses an anti-oppressive approach that aims to challenge oppression from an individual to an institutional level.