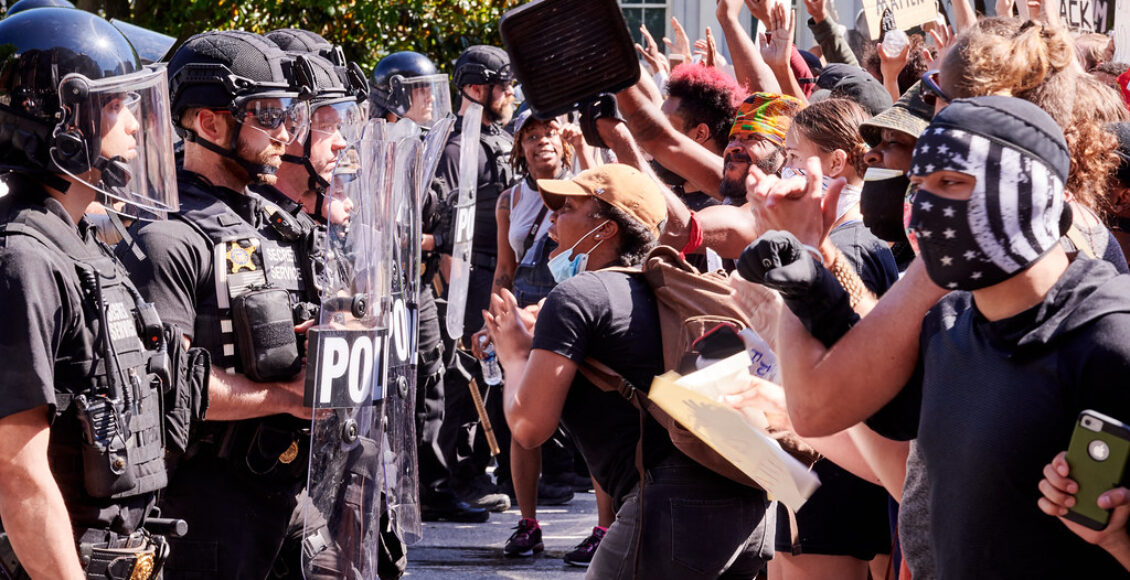 Over the last two centuries, proud patriots have described the United States using tropes like the “indispensable nation” and “the last best hope on earth.” The notion of American exceptionalism has long been at the core of the nation’s collective identity. Decorated with victories from World War II and the Cold War, the United States has bolstered itself as a champion of liberal democracy, uniquely positioned for global leadership. These successes have allowed the United States to assume the moral authority it needed to project its power across the globe.

However, it may be time to rebuff these praises and confront the reality of America’s eroding democracy and moral authority. The most recent Black Lives Matter (BLM) protests have exposed to the average citizen the deep fissures within the American system, leaving major authoritarian rivals quick to charge the US government with allegations of hypocrisy. Accordingly, the nation’s traditional role as the guarantor of liberty and keeper of human rights is due to be reconsidered. The American government’s repressive response to the protests has exposed both instability and systemic flaws that are strikingly parallel to those of its adversaries. Amid tear gas and the mocking criticism of autocrats, the rise of illiberalism and decline of moral authority affirms that America’s great liberal democracy is faltering.

On May 25, George Floyd, a 46-year old Black man, was killed after a Minneapolis police officer pinned his knee to Floyd’s neck. Floyd’s last words, “I can’t breathe,” would be the catalyst to the revived nationwide — and now global — BLM protests. Millions have since taken to the streets to protest against a culture of police brutality and systemic racism.

The US government’s response towards the protests has been nothing short of callous and worrisome. President Trump has condoned the use of heavy-handed military force against civilians, declaring himself a “president of law and order,” while threatening to deploy the military and National Guard to suppress civil disorder, insurrection, and rebellion. Trump has also responded to the protests with strongman tactics, most notably at the expense of Washington DC demonstrators. On June 1, federal police cracked down on protesters and journalists at Lafayette Square, clearing a path for the president to score a bible photo-op with a message that the state “will not be overcome by looting, by rioting, by burning.” These latest moves fall far from America’s song of liberal exceptionalism — they are despotic abuses of power.

While the US has, for decades, leveraged its moral authority to condemn other nations with charges of human rights abuses and even genocide, the country’s flagrant disregard for Black lives underscores its own inability to uphold liberal democratic values at home. China, Russia, and Iran are some of the United States’ most critical opponents. Often at odds with American foreign policy, these autocrats have been watching the BLM protests closely to further their own political ambitions and point the mirror towards their democratic counterpart.

While Chinese officials have long held to the principle of non-interference, Beijing has made an exception for this unique moment in American history. As the 31st anniversary of the Tiananmen Massacre loomed, President Trump’s decision to deploy weapons of war against D.C. protesters proved to be a troubling misstep. In particular, it provided Beijing with the ammunition it needed to advance its criticism of America.

Protests in Hong Kong have reignited with the Chinese government’s plans to impose a new National Security Law — one that would curtail the freedoms of Hong Kongers in the name of national sovereignty. In light of these events, the BLM protests make for an easy propaganda campaign. Beijing was quick to denounce the Trump administration’s censure of its new security laws. State news agency Xinhua returned the fire by describing the US protests as a “beautiful sight,” a reference to Nancy Pelosi’s remark last summer that the Hong Kong protests were “a beautiful sight to behold.” Furthermore, China has condemned America’s bias against Black people, asserting that “racial discrimination against ethnic minorities remains a social ill in the US,” and that, “Black lives matter.” These admonishments exist in spite of China’s controversial crackdown on Uighur Muslims in Xinjiang.

Amidst a deteriorating relationship with the United States, Moscow has not been shy in its criticism either. Although Russia itself has neither a history of permitting peaceful protests, nor a clean record against human rights violations, Moscow has denounced Washington’s response to the protests, urging them to observe democratic standards, respect the right to protest, and protect the rights of its own citizens before finding faults in Russia to the same effect. Speaking on the pervasiveness of racial discrimination in America, Russian Foreign Ministry Spokeswoman Maria Zakharova emphasized that the “scope of evil cannot be concealed.”

Similarly, Iran has seized the opportunity to attack the state’s handling of the protests. The Trump administration has been a vocal critic of the Iranian regime and its treatment of civilian demonstrators. In a tweet from January, Secretary of State Mike Pompeo charged Supreme Leader Ayatollah Khamenei’s “kleptocracy” with “corruption, ineptitude, and brutality.” Evidently, such criticisms have aged poorly; in light of the recent protests in the US, government spokesman Abbas Moussavi mocked the Trump administration’s plea for the Iranian people in a message to Americans: “The world has heard your outcry over the state of oppression … the world is standing with you.” Taking additional steps to chastise the US’s supposed human rights hypocrisy, Khamenei chalked the culture of police brutality up to the nature of the American government, drawing parallels to American actions in Iraq, Afghanistan, and Syria.

The phenomenon of American hypocrisy has been a persistent trend in both its foreign policy and pious rhetoric. To this end, while charges of hypocrisy against the US are all but novel, this particular instance has made the shortcomings of US democracy starkly evident. From rooted inequality to divide-and-rule tactics, to the government’s willingness to leverage the repressive state apparatus rather than address demands for change, there appears to be little difference between the American nation and the authoritarians it has historically vilified. The recent BLM protests indicate that there is certainly a broken link in America’s mission for democratic leadership.

The Trump administration has repeatedly denied that racial discrimination is embedded in the political, economic, and social structure of the country, attributing cases of racially-motivated police brutality to a “few bad apples.” However, George Floyd’s death was not an isolated incident, but rather another Black life lost to centuries of racial discrimination at the hands of the American system.

As a country founded on slavery, the hallmarks of American liberal democracy – liberty, opportunity, and prosperity, have been historically reserved for white people through the deliberate exclusion and oppression of people of colour. Thus, while the United States boasts its role in creating the postwar international human rights regime and continues to centre its diplomacy on human rights enforcement, it fails to bring these norms home. In its adamant refusal to make amends for its racist foundations, unchecked white supremacy and racism have, in turn, empowered the country’s failure to observe the same standard of human rights at home — effectively creating a mockable legacy of hypocrisy that undermines America’s moral authority and the credibility of Western democracy abroad.

It is commonly thought that the assault on American democracy began with the entrance of President Trump in 2017, but the fact of the matter is that the demise of liberal democracy is but an aberration of the Trump administration. While it repeatedly criticizes the poor human rights records of China, Russia, and Iran, amongst other rival authoritarian states, America’s prized liberal democracy is marred with abuses of its own. Authoritarian calls of hypocrisy affirm that America has failed to be exceptional, succeeding only as a painful reminder that the global struggle for democracy is, in fact, leaderless.